Lucy Bergonzi is an illustrator with a background in community arts, and has extensive experience in arts and project work in the voluntary and community sectors. Here she describes the process of producing the book ‘A Day at the Beach’, published by Books Beyond Words in April 2016, which she illustrated and co-authored with groups of adults with learning disabilities.

In 2015 I started illustrating for the publisher Books Beyond Words, who produce books for adults who have learning disabilities. Telling stories through pictures, without the use of words, the books support empowerment and inclusion for people who don’t read words. They deal with many of contemporary life’s concerns, such as health, emotional and social issues. Having worked for several years in the learning disabilities sector, I had a particular interest in accessible communication, so this work immediately appealed to me. First, I was commissioned for two illustrations for a reprint of the ‘Going Into Hospital’ title. Since this book’s original publication in the 1990’s, the Hospital Passport format has been widely adopted by people with learning disabilities; it’s an accessible document carrying the user’s vital health data, their likes, dislikes, and cultural information. I produced an image of a Hospital Passport, and a patient using his Passport to help him communicate with a nurse. 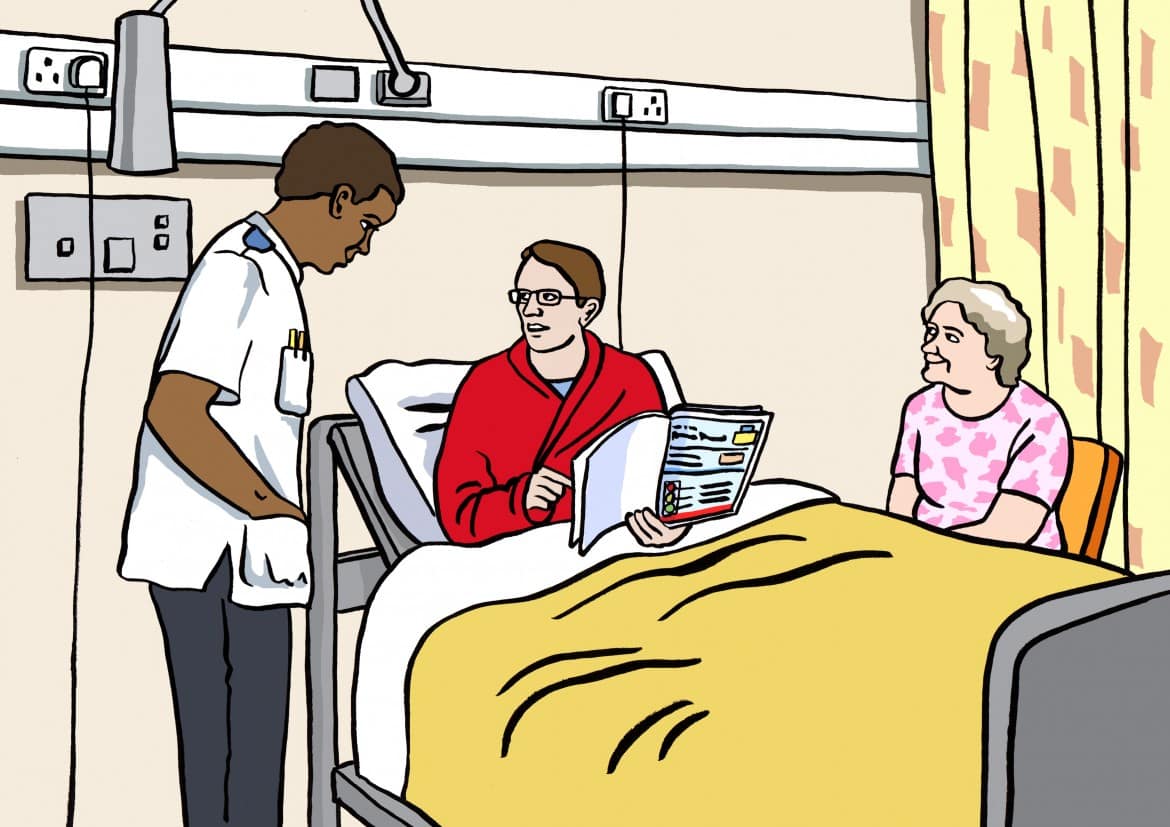 Next I started work on the ‘Picture This’ project. It’s an initiative between Books Beyond Words and Kent Libraries, whose book clubs for people with learning disabilities are keen users of Beyond Words books. With Arts Council funding, ‘Picture This’ aimed to create three new titles for Books Beyond Words’ catalogue, less issue-based and more about reading for pleasure. A key aspect was that the books would be co-written collaboratively by book club members. People with learning disabilities often don’t get their voices heard, and the project aimed to support groups to express and create something relevant and enjoyable. I worked on one of three stories, with Dover, Folkestone and Deal book clubs, while two more illustrators worked with other groups on companion titles. 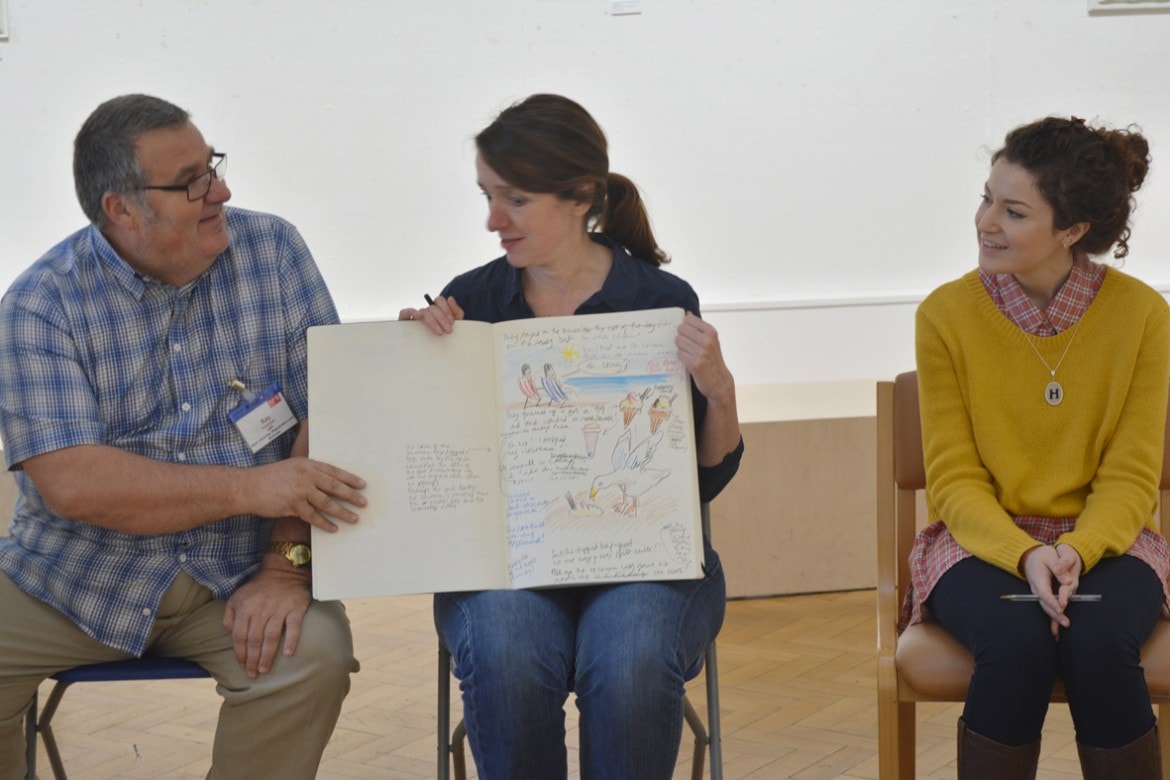 In an initial session at Dover Library we used drama to improvise and develop ideas, giving us a seaside setting, and story elements including a cold wind followed by warm sunshine, swimmers getting changed behind a sea wall, and a dropped ice cream. I drew and scribbled notes quickly, capturing the ideas which came up. We took this strong starting point to the next book club, a couple of weeks later, at Folkestone Library. This group added actions, texture and atmosphere, along with plot solutions, including a seagull pecking and bursting a lilo. Again, notes and sketches came away from the session, and into my studio. It was now up to me to take an authorial role and make decisions on characters, tone, specific actions, and story arc, which would be limited by the book being only 15 pages, and therefore 15 A5 frames. Beyond Words books have written notes at the back, to be referred to by readers or supporters if necessary, but the images are designed to carry the story by themselves. 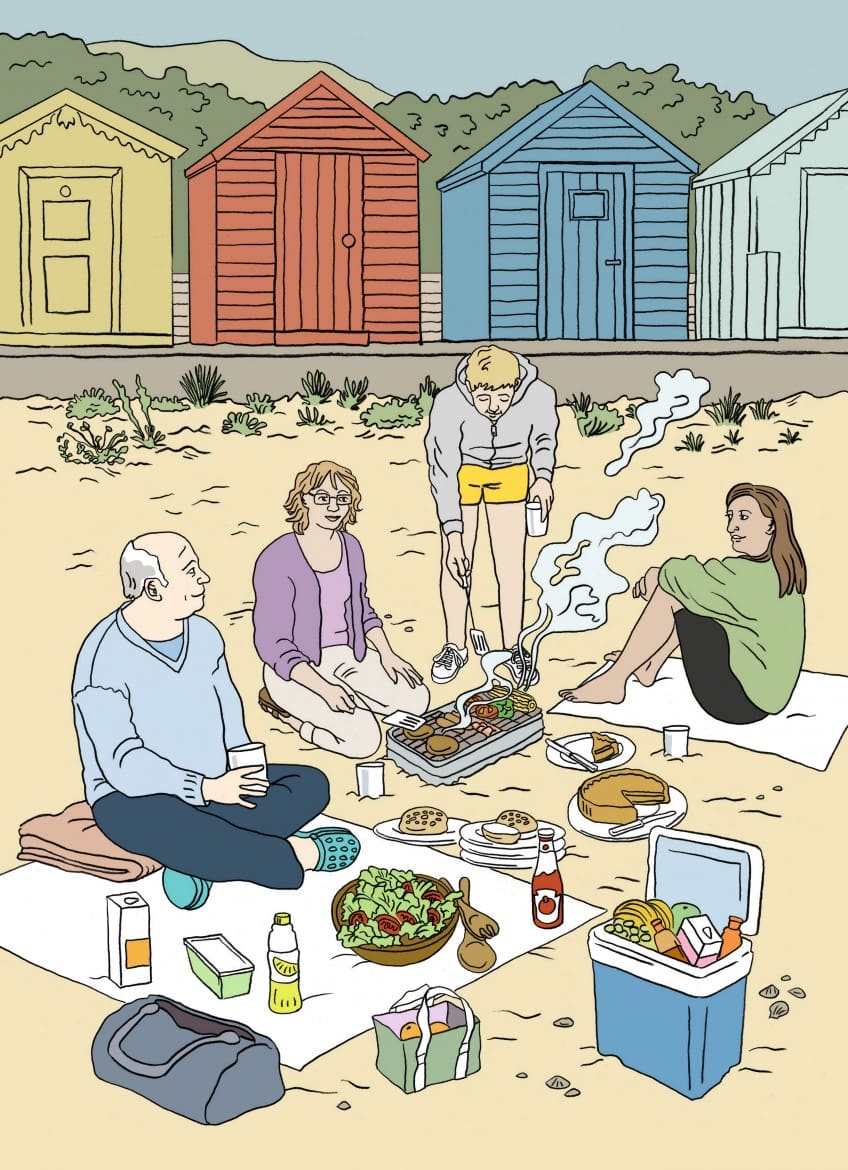 As I was capturing 15 clear moments in time, each had to be redolent with meaning and significance. Three reasons: 1) Due to the nature of the readership, there was a need for clarity and legibility. 2) For readers with a limited attention span there is reduced time to tell the story, so a certain story arc has to be considered. 3) The image is the medium that carries the story and the meaning: there are no words to help it along.

I enjoyed creating a world in which there are no words: in reality we’re surrounded by written words in the form of advertising and branding, and it was fun to show this in other ways. I branded an ice cream van with snowflakes and penguins: the penguin came from a drama session when someone walked like a penguin and we decided to use that idea. 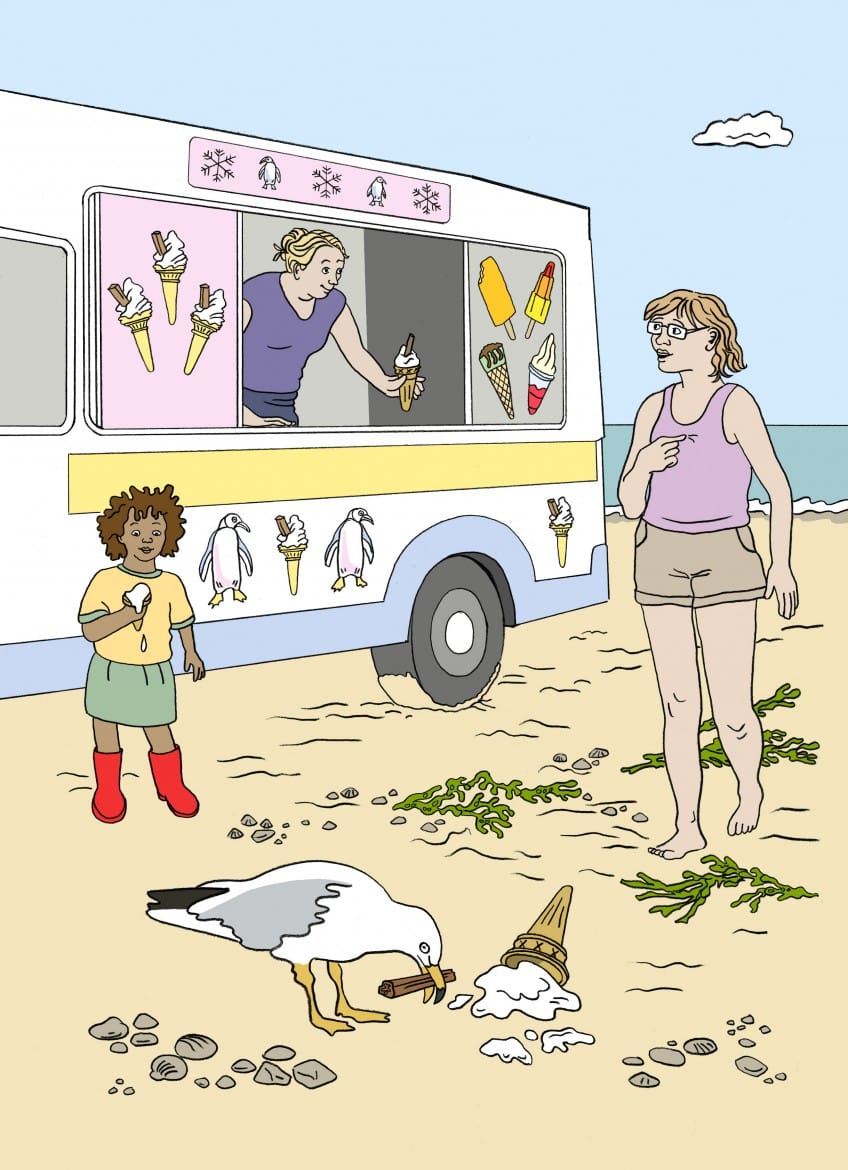 One challenge – an enjoyable one – was to create visually complex and interesting pages, while retaining simplicity of storytelling, and clarity of message. Our story was set on a beach, which in real life would have a lot more background activity than I could show without it becoming cluttered and distracting: I needed to keep my illustrations clear. Equally, emotions had to be clear and perhaps slightly enlarged, though this needed a subtle balance too – I didn’t want this to be mistaken for a children’s book. It had a specific readership; and indeed authorship. 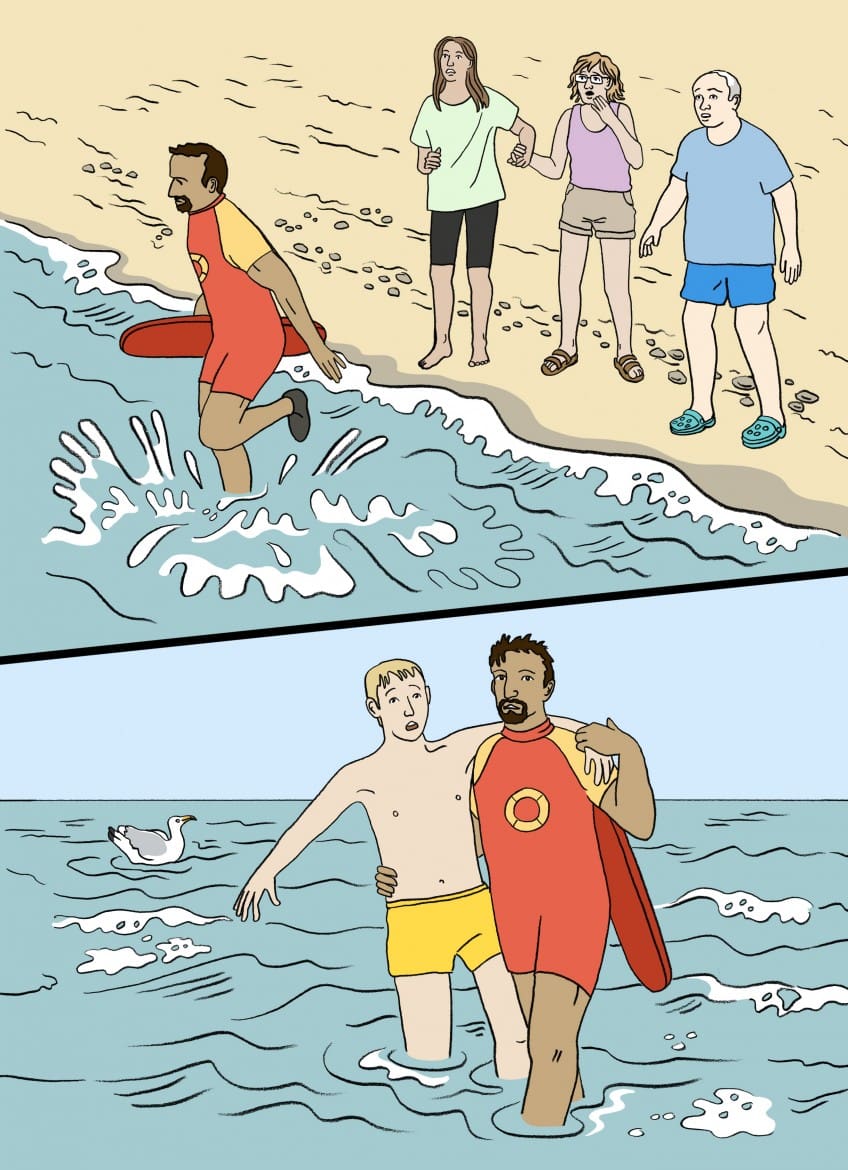 The project was set up to have input from groups at the beginning and along the way, making the story a living thing with the ability to respond to ideas during production. How Books Beyond Words works – with all their titles – is at stages during the illustration and story-making process, roughs are sent out to trialling groups, which in our case included Deal Library’s book club. The trialling groups go through them in a group setting, giving their feedback on the general story, and on specific illustrations, details and story moments. During the trialling process of ‘A Day At The Beach’ I was able to respond flexibly and organically to feedback. For example, a group pointed out that the characters should be protecting themselves from the sun on the beach, so I quickly put a bottle of sun cream into one of the pages. It was something I’d previously overlooked. For me it was nice – and so useful – to get that sort of live input. It made the characters feel more real: real-world people were looking out for them and not wanting them to get sunburnt. This was a lovely aspect of the participatory process – and shared ownership – of working on this project. 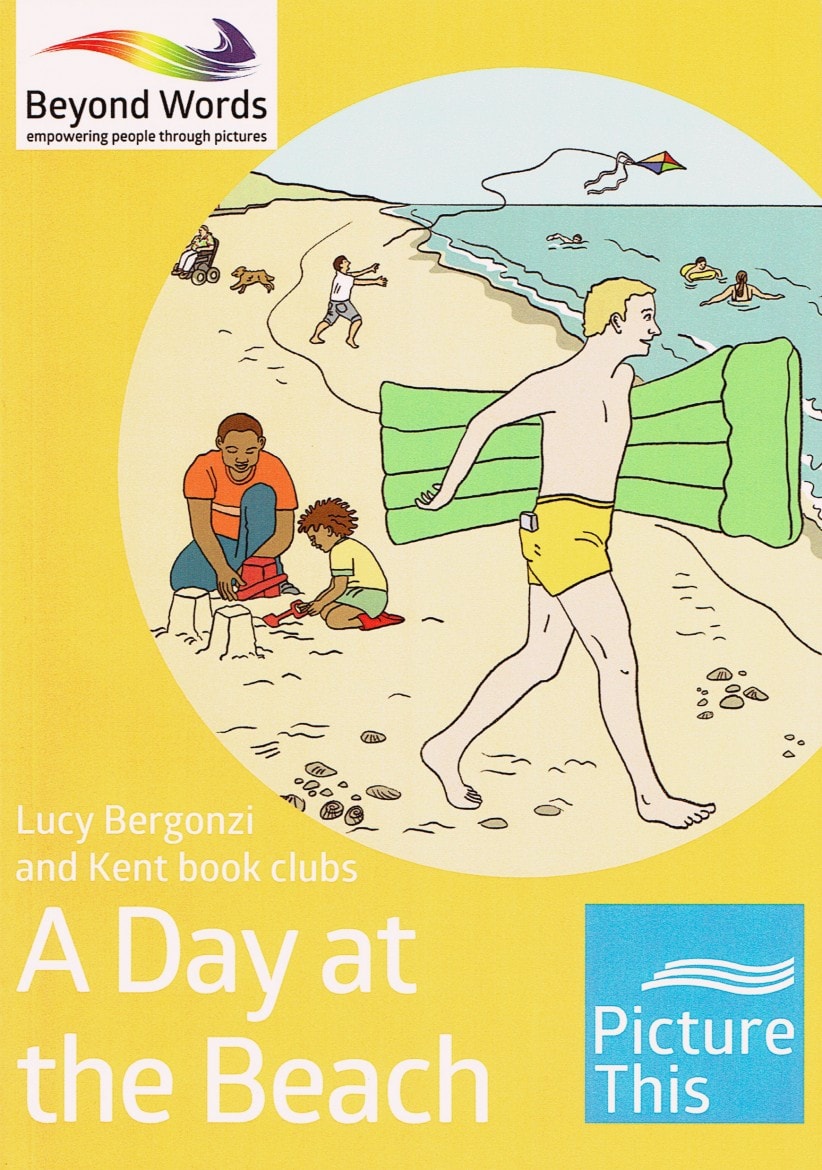