Home / Latest / Spotlight on Theo Phizza – Notes from the Asylum #1

Following redundancy from a company at which I had worked for 22 years I was admitted to a mental health facility (“the Facility”) at the beginning of 2020 to be treated for generalised anxiety disorder (“GAD”) partly triggered by the redundancy situation.

I first saw a Psychiatric Consultant in December 2019 who advised me that in-patient treatment would probably be best for me. It later turned out he had been a Psychiatric Advisor on a series of Big Brother. This seemed to me to be a possible cause of confusion as this Cartoon shows. 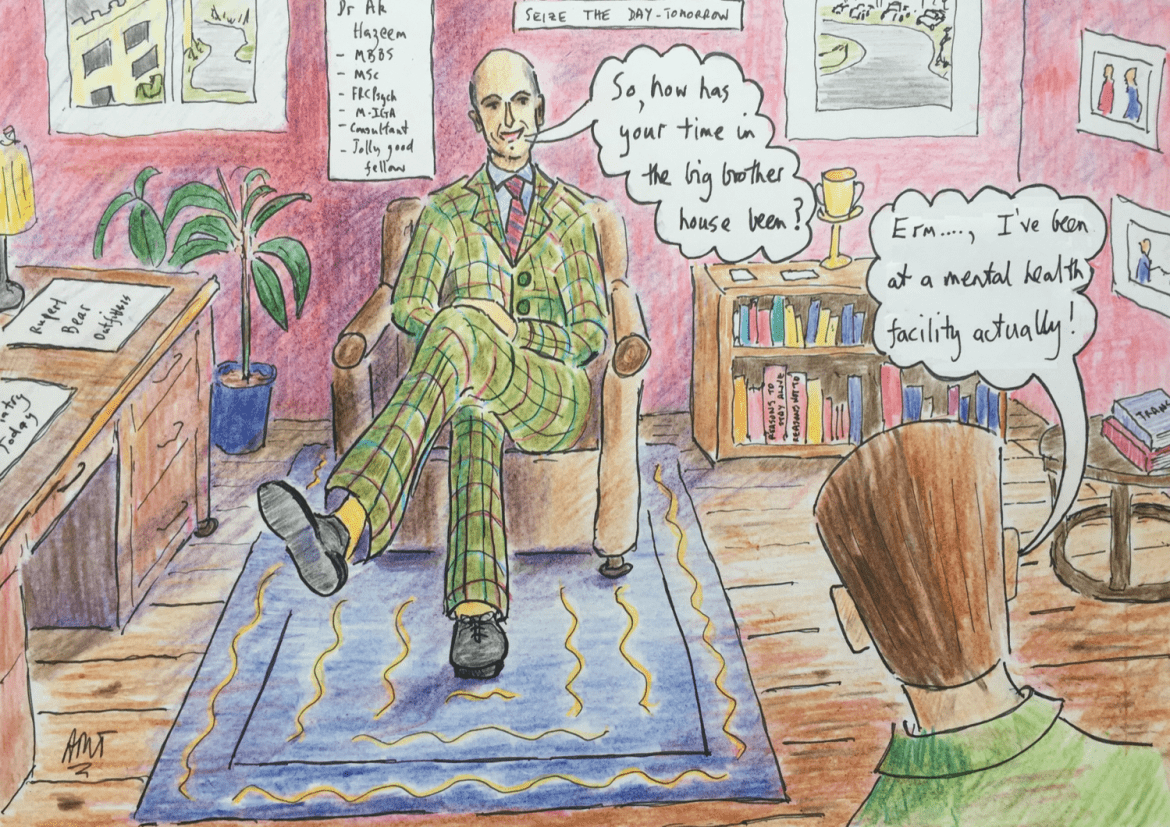 I stayed at the Facility for  eight weeks as an inpatient and came straight out virtually into the first Covid lockdown in March 2020. A weird set of circumstances for anyone to deal with I think you’d agree.

I had been painting and drawing as a hobby but for many years but had an hiatus of about five years prior to going to the Facility, I think partly due to the build-up of GAD which had made even drawing a stressful and unenjoyable activity. One of the Group sessions at the Facility was art therapy which started me painting and drawing again and I found the sessions very therapeutic.

The first Group session of the day was the Morning Support Group where we were asked to express how we were feeling or what thoughts were occupying our minds at that moment. These thoughts could be pretty disparate, as shown in the next Cartoon. 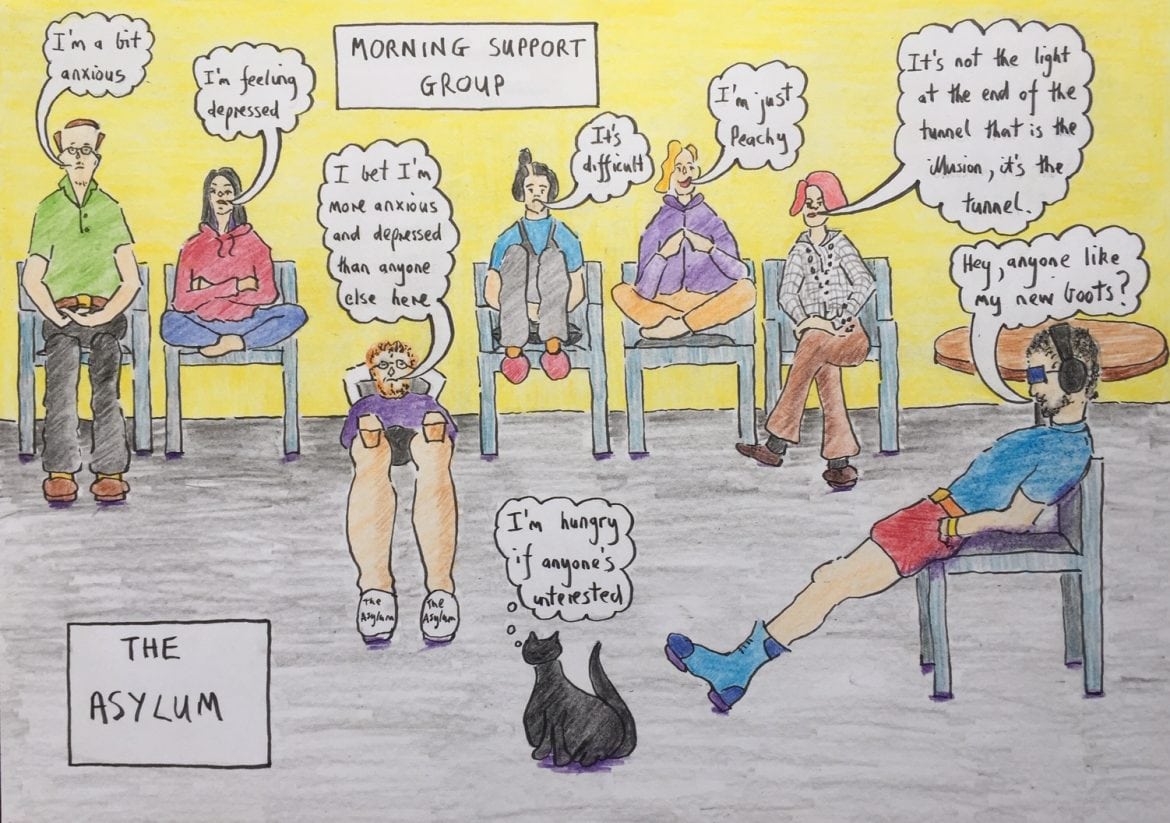 In the absence of anything else to draw during lockdown, as I was sitting in my attic room looking at the same view, I started trying to draw from my imagination for the first time. Over a few months in Spring/Summer 2020 this developed into a series of Cartoons about my experiences at the Facility and the people I met there.

Given the Facility was full of people with mental health problems the Morning Support Group could also be pretty downbeat and no amount of cajoling from the therapists could coax us out of our low mood, or indeed to say anything at all, as shown in the below Cartoon. 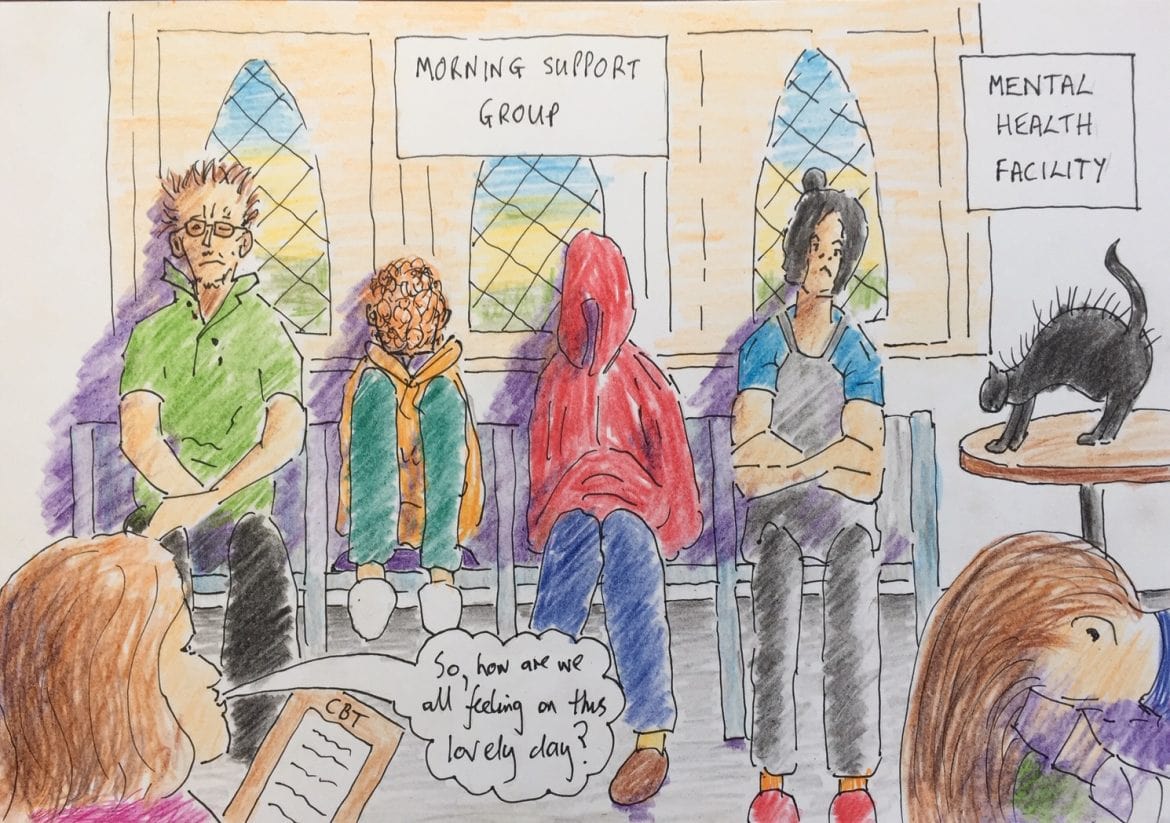 The black cat appears in most of my Cartoons. I don’t know exactly where he came from as we didn’t actually have cats on the wards at the Facility. I put him in, I think, to act in lieu of the Heath Care Assistants (HCA’s) and other staff who were always hovering around looking after us. They would try to give the more balanced view to patients who were often over-reacting to situations.

The patients could also be very up and down from one session to the next as the following Cartoon shows. I guess it’s the nature of a lot of the disorders that were treated at the Facility (mostly Anxiety, Depression, addiction and similar/related disorders). 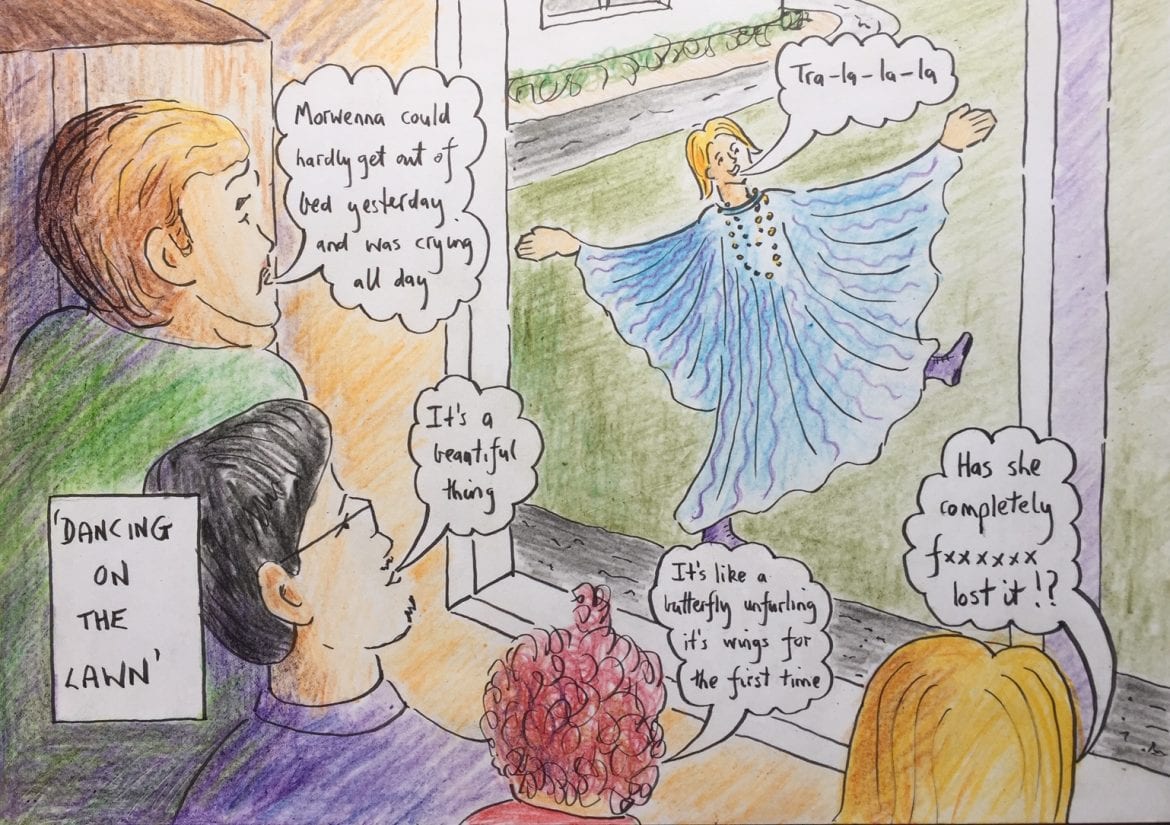 I had never drawn any Cartoons before Spring 2020 and all the painting and drawing I had done previously had been from “Life” ie: human beings and landscapes. I found drawing from my mind/imagination and the Cartoons a very helpful exercise as it both helped me to process my experiences at the Facility and also gave me something absorbing to occupy my time during the various, seemingly interminable, Lockdowns.

The basis of the Treatment at the Facility was mostly Cognitive Behavioural Therapy (“CBT”) and about half the sessions were theoretical and focussed on particular aspects of Anxiety and Depression such as co-dependence, unrelenting standards, emotional resilience, self-esteem etc. A Cartoon about co-dependence is shown below. 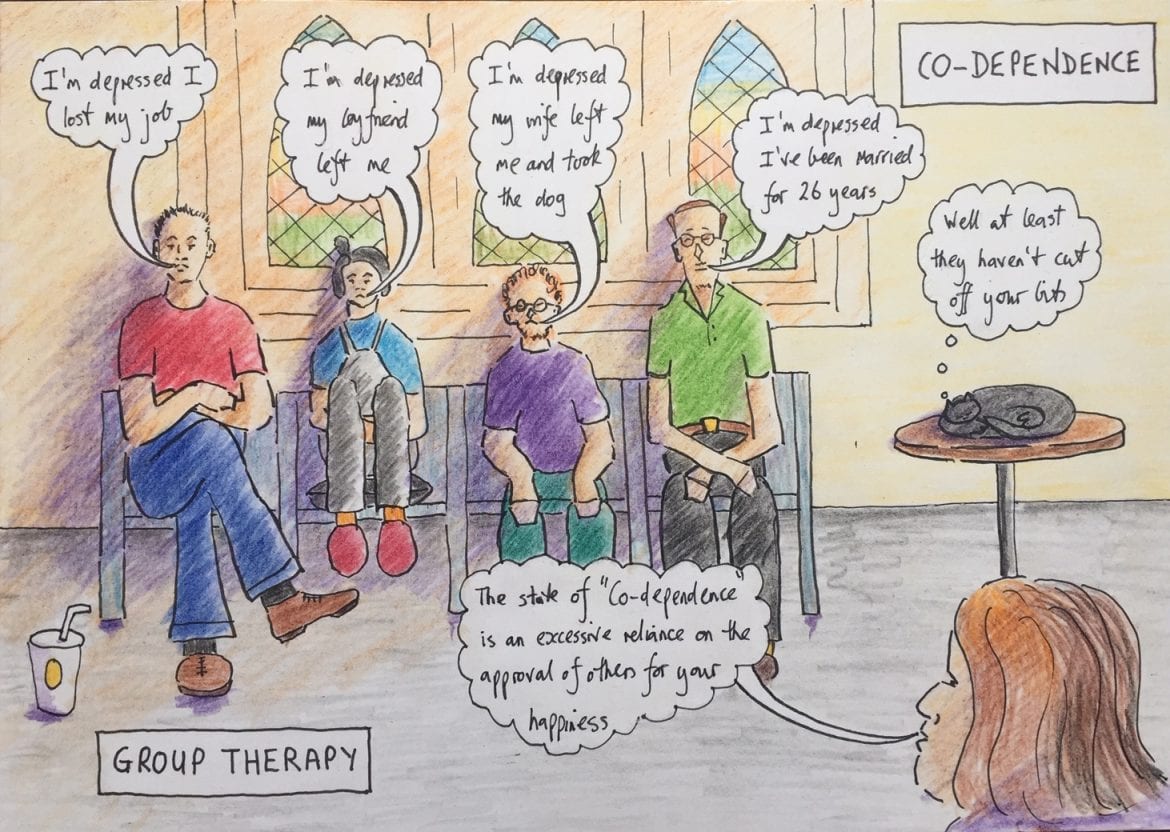 I ended up doing 100+ Cartoons and then sent some of them off to a few magazine and book publishers without much response (with the exception of one). I then ran into trouble as the Facility didn’t want me using their Facility as the setting for the Cartoons and a couple of the people that I had based the characters on in the Cartoons didn’t want them published.

So I was faced with re-drawing all the Cartoons using an imaginary Facility and different characters whilst keeping the same feel and gentle humour of the original Cartoons. I have done this with some of them (about 15) and most of the redrawn ones I’ve included here. Therefore I can guarantee that any resemblance to people or places in these Cartoons is entirely coincidental, with the exception of me (I’m the chap in the green shirt in all of them).

As well as the Group sessions there were also lots of different exercise sessions. This was because another aspect of positive mental health is staying fit and active. One of those was Chi Gong (spelt something like Qi Gong, but said Chi Gong). I had never heard of this but apparently, it’s very popular at the moment. See below Cartoon. 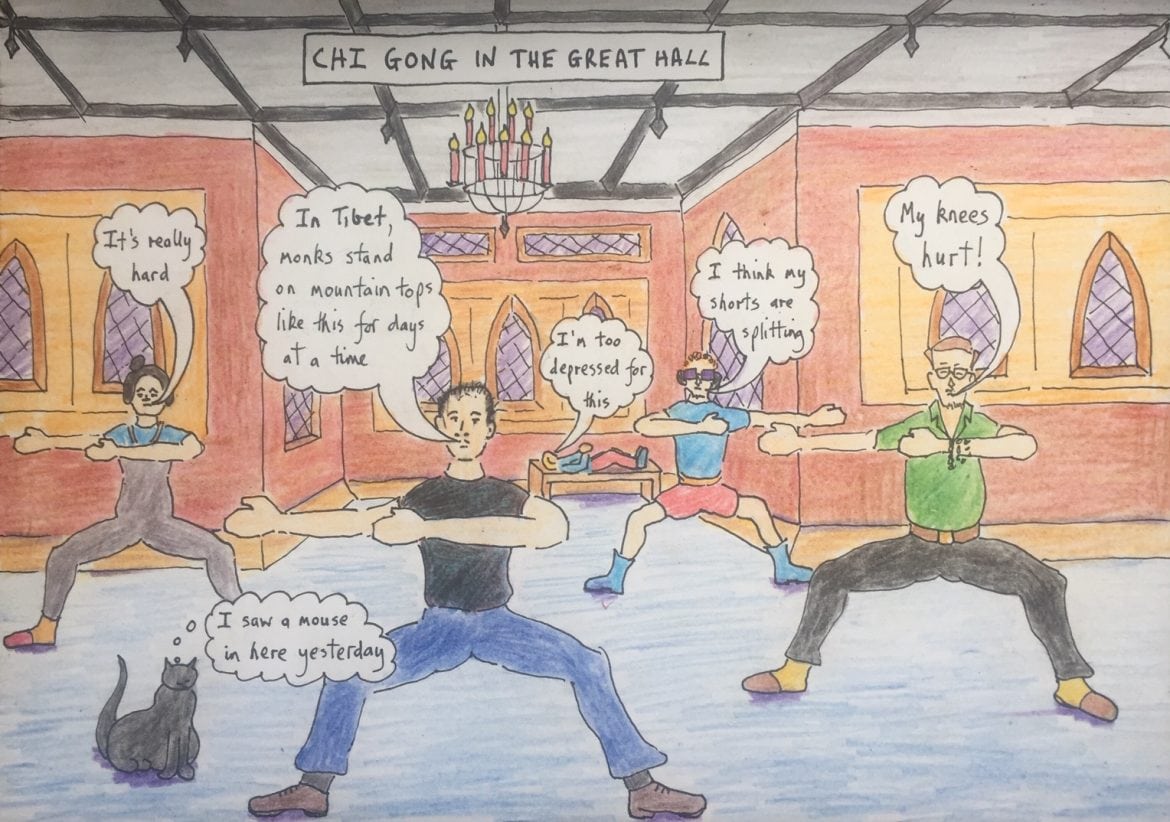 There was also a lot of focus on Mindfulness at the Facility, which most people think of as form of meditation. It can however really be any sort of engrossing activity that makes you fully focus on the present. One of these Mindfulness games had us blindfolded and making animal noises on the lawn (shown in the below Cartoon). Heaven knows what a random visitor would have thought coming across this scene! 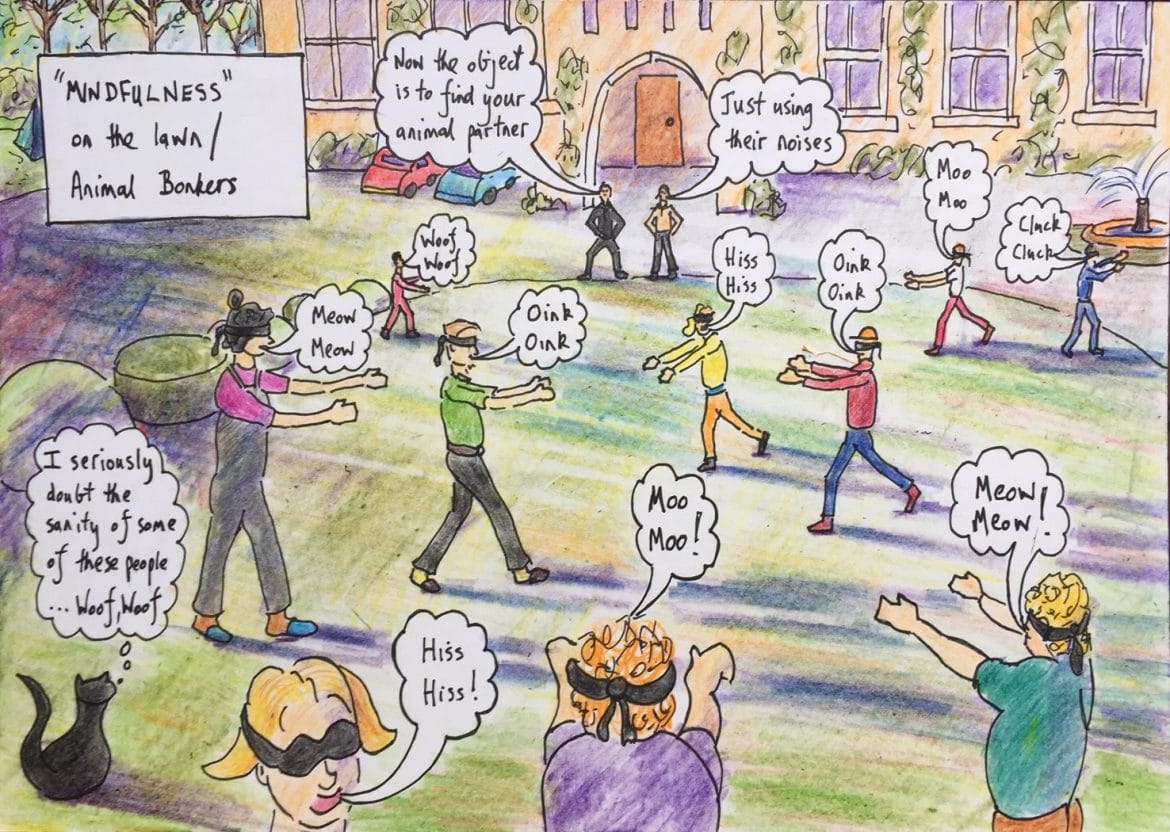 So after my allotted time (ie: when the insurance ran out) I had to leave the Facility. No-one ever feels ready to leave and it’s a very safe, comfortable environment there. The outside world seems quite scary to return to.

It was certainly a life enhancing experience and I met some lovely, amazing people. Although we were only there for a short time together, I established some very close connections and when it came time to say goodbye it was always very emotional as shown in the below Cartoon. 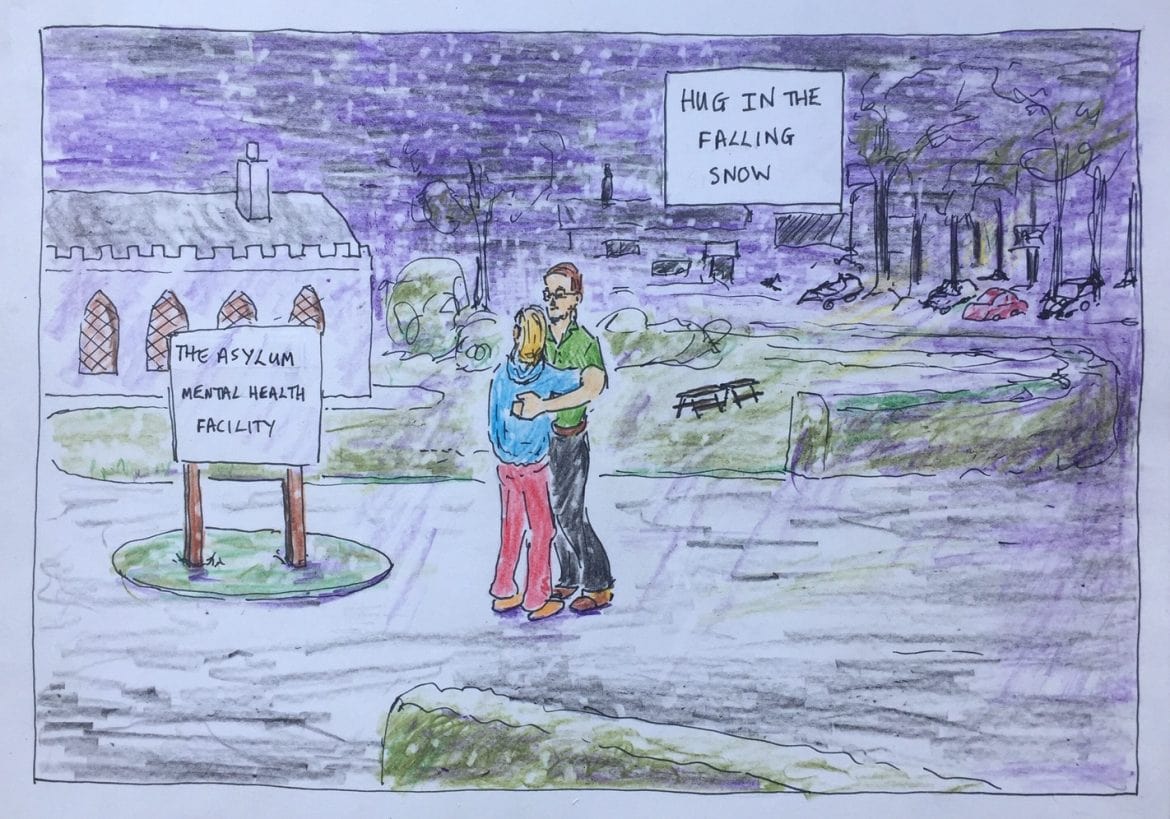 A number of the redrawn Cartoons have been published in Asylum magazine – the Radical Mental Health Magazine, which was a big thrill for me having never been published before. Thanks to Helen Spandler at Asylum Magazine for that.

So I’m now wondering whether to pursue these Cartoons and cartooning generally. I have been told that some of them would work better as multi-panel Cartoons rather than single panel ones as they contain a lot of words.

This Graphic Medicine website is clearly read by a lot of people who have an interest and experience in Cartoons and I would be very interested in any ones thoughts/feedback on whether/how I might progress. Any feedback please to theophizza@gmail.com