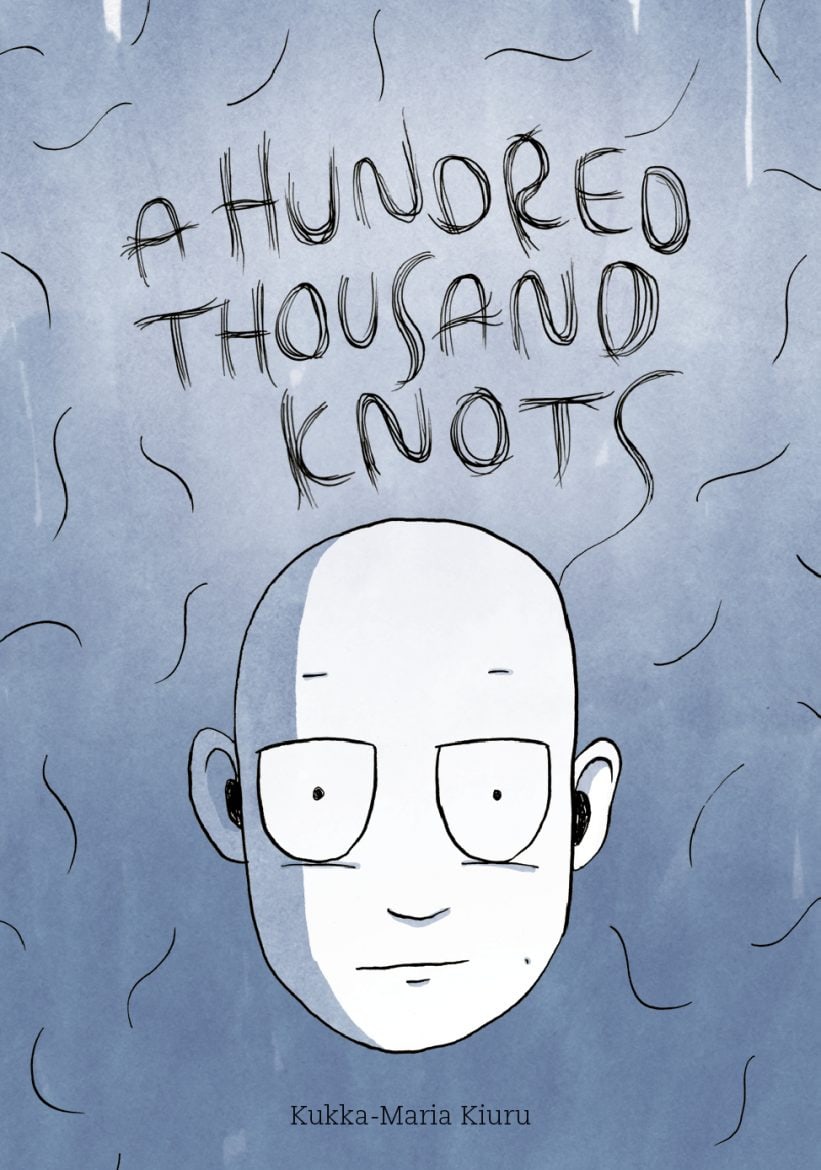 Alopecia has always been in my life. It runs in the family. I first got signs of it when I was 5 years old. At the time my parents didn’t know about the symptoms that some of my relatives had already had.

Everything that happened because of my alopecia at that time left me with feelings of confusion and uncertanty. Years later, after losing all my body hair, I had to confront my own attitude towards this disease and figure out something to help me get through the bitterness and fear.

Alopecia has very visual symptoms. Losing my hair, eyebrows and lashes made me want to hide, but I got tired of hiding, and the decision to bring my condition and story into the daylight in my own, very visual way, was only a matter of time. I quit my day job and took some time to see what would happen, and soon a plan to make a graphic novel started to form.

Besides working on a graphic novel I also created Blue Boots, a comic strip and character project about an ex-animal-testing beagle and a bunch of her friends. I think this was another aproach of dealing with the same thing. In Blue Boots, there’s this beagle who thinks she can’t live without boots. At the same time I was writing a story about me not being able to live without a wig. The connection is obvious now, but it wasn’t back then.

Working with words was easy. I sat in the library and made dozens of draft manuscripts. The hardest part was to “choose” how much bitterness I was ready to let out. With visuals and images, however, giving a form and lines to the story wasn’t easy at all. Although I could visualise the page layouts in my mind, when I started to draw the first sketches, things got really emotional. At that point I realised I would need to take a very hard and close look at my own story, attitude and past. 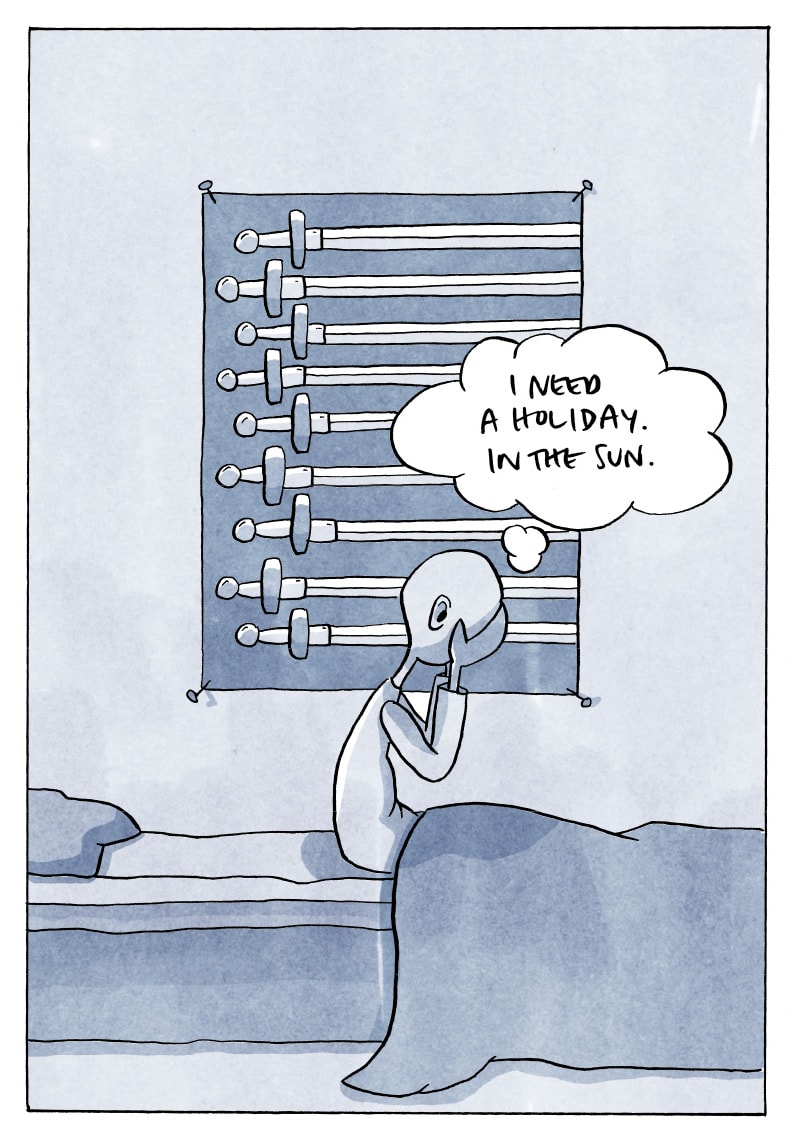 From the beginning it was clear that drawing would be done with pen on paper. For some reason, I ended up choosing the most unfamiliar tools for the work. Maybe unconsciously I followed the way alopecia work – it always gives you something unexpected and unfamiliar you are not ready for. I spent a long time trying to control the ink with a G nib, but as with alopecia, or in life, there’s no control really.

Producing A Hundred Thousand Knots took me a long time. From planning the first sketches to drawing, inking and coloring the finished work took a year and half. First I drew rough frame drawings, then line sketches, detailed line sketches and at then inked them. By drawing every line four times, I lived through the story and made peace with the past. It was my therapy.

The workload felt endless. I used to say the work chose me, not the other way round. When I finished the work I woke up early the next morning with the feeling of something heavy coming out of me. I ended up vomiting for almost four weeks and ten kilograms in weight. I had no idea what was happening but my close friend said “Isn’t there an image of you in your graphic novel where you vomit out all of your frustration and pain. So what did you expect?”. 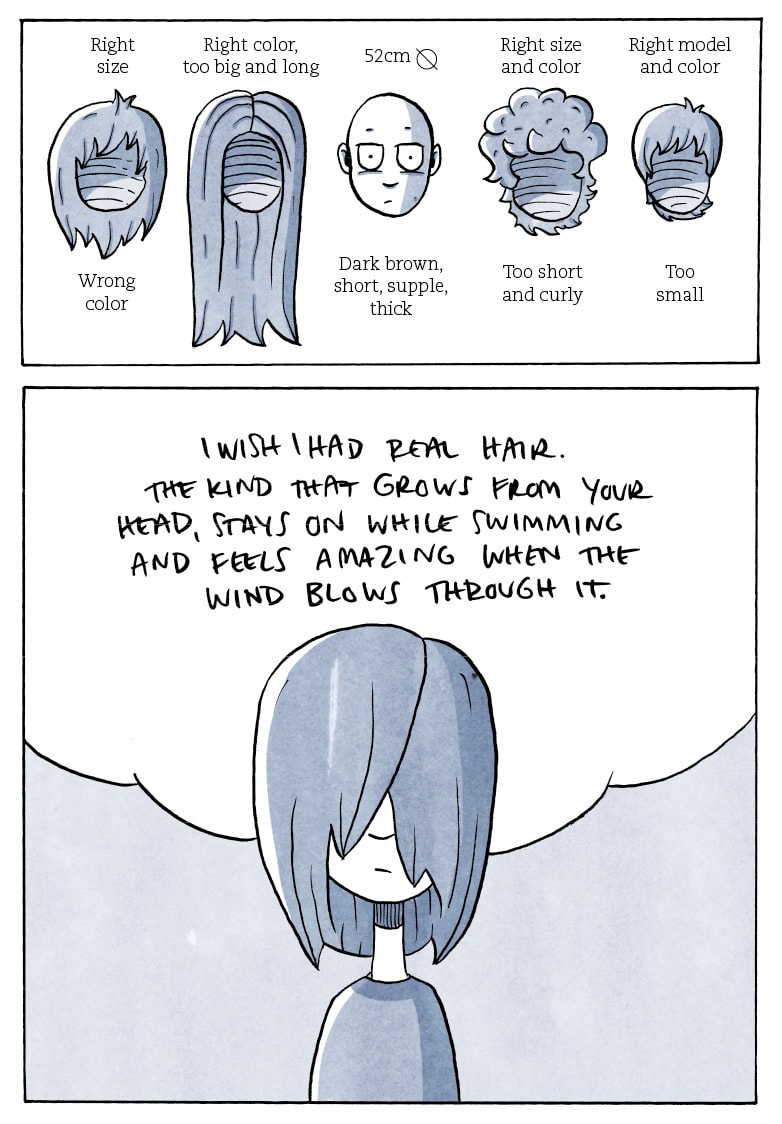 It took almost a year before I published the work. No publisher wanted to take it so I though it would work better with regards to peer support if it was online as an ebook. Of course I would have loved to see it printed but for me, getting the story out was the main point. In this digital era I could master everything from marketing to meetings with the readers by myself. Some kind spirits helped me with website.

Now I’m happy it’s free and online. Numerous people have contacted me and told about their own struggles. People need hope, encouragement and peer support. Everything will be okay, eventually. The album was published in Finnish in September 2016 and in English in September 2017.

PS. By the way – September is an alopecia awarness month!

Kukka-Maria Kiuru is a Lead Creative, Visual Designer and Artist. She’s an author and illustrator of the graphic novel A Hundred Thousand Knots and a creator of the Blue Boots comic strip. Kukka works in advertisign and also does experimental illustrations, mentoring, give talks about creativity and host Candy Play Workshops, multisensory creative play sessions for adults. She is living and working in Helsinki, Finland.