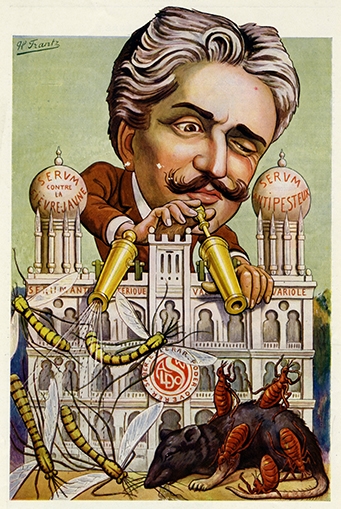 The ushering in of the modern epidemiological age was marked not only by the invasion of Europe and America by cholera and other pathogens, but equally by a public commentary on epidemics through the use of caricatures and comic strips. Graphic figures of speech, visual condensations and sketched comparisons provide shortcuts to the ‘hardened political metaphors’ (Gombrich) at stake in epidemic crises. As such, this popular mode of communication, debate and critique, was soon taken up by epidemic deniers, health critics and by governments and international agencies in public health education campaigns. Since then the use of comics both by journalists, doctors and governments, has only proliferated becoming a key component of what Charles Briggs has recently called the contested field of biocommunicability. Most recently, the US Centers of Disease Control (CDC) launched a vast epidemic preparedness campaign using a two-volume graphic novel specially designed to familiarize the general public with the principles and responsibilities of epidemic control via the story of a zombie pandemic striking America.

Both allowing governments to reach broad and diverse audiences, and critics of governmental policies to effectively undermine dominant outbreak narratives, comics are perhaps the most democratic and creative mode of fixing and destabilising truth as regards epidemic crises like SARS, Ebola or Zika in the twenty-first century. At the same time ‘comic epidemics’ have risen to be a popular theme in the realm of graphic novels proper, with works like The Walking Dead or the Argentinean best-seller Dengue dwelling upon the graphic narration of imaginary outbreaks to communicate commentaries on social collapse, survival ethics and the human condition at large.

Though often illustrating historical or anthropological works of epidemic disease, the comic figuration of epidemics has remained an analytically unexamined area.

We are soliciting papers from across the social sciences and the medical humanities that examine the emergence, utilisation and transformation of comics, caricatures and animation in relation to epidemic disease, and the prospects and risks of their use in epidemic prevention, preparedness and control.

Those interested in participating in the conference should send a title and abstract of 300-400 words to Lukas Engelmann (lukas.engelmann@ed.ac.uk) and Christos Lynteris (cl537@cam.ac.uk) by 15 December 2017.

Successful applicants from the call for papers will be offered two nights’ accommodation in Cambridge and up to £100 in support towards travel costs.