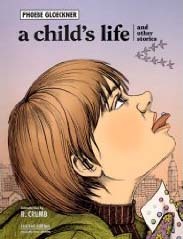 Phoebe Gloeckners is an american cartoonist, illustrator, painter and novelist. This explicit tale of child abuse, drug abuse and sex is disturbing from the outset, with a teeth-jarringly confessional, but embarrasingly funny, introduction by Robert Crumb, a personal friend of the artist and her mother. I call it ‘disturbing’ because I was brought up in comfortable middle class England, and to someone like me, conditioned to think of myself as ‘average’ but probably actually a from a minority cohort, the type of life that Gloeckner describes here is rather alien. To vast numbers of readers, however, A Child’s Life will no doubt chime with their own life.

The introduction is followed by an amazing “Self Portrait with Pemphigus Vulgaris” showing the author covered in bullae. Gloeckner trained as a medical illustrator, but didn’t, according to her foreword, ever suffer from Pemphigus. Then the stories begin. These mostly concern a youg girl, Minnie, her younger sister, their ineffectual mother and their selfish, pretentious, vile stepfather. He’s got an appetite for young girls, finding women his own age rather repulsive. Minnie is emotionally damaged by abuse and, as she grows older, gets into drugs and casual sex, falling in with junkies and getting used and abused by them. In one scene her friend, Tabitha, loads her up with Quaaludes and lets two men rape her while she is unconcious. There is also a strip Gloeckner made when she was only 16. This shows another character, Mary the Minor, having sex with her mother’s older boyfriend. Other stories of sex, deciet and futility ensue. The volume ends with a selection of Gloeckners medical illustrations. Again, the main themes are sex, violence, psychological and bodilly damage. They are visually compelling, the  artwork is superb, mixing traditional pathological illustration tecnique with shocking subject matter. Gloeckner refuses to call her work ‘autobiographical’, although she freely admits it is based on her own experiences (Martin 2003):

“I never call my stuff ‘autobiographical’ because I think ‘autobiographical’ implies that something is true. But to me, all that  term implies is that it has the point of view of the author. i don’t think there really is any such thing as truth. It’s all our own interpretation. Memory changes; you create your own mythology, because things are reduced to symbol over time.”

Because Gloeckner’s character Minnie strongly resembles the author herself, and because Crumb, in his forword suggests the stories are true, readers and commentators seem to have generally taken A Child’s Life to reflect her own early, chaotic life. Gloeckner’s position seems to be that, while Minnie is based on herself, she has a separate life, existence and history as a character. The author can therefore distance herself from Minnies exploits and feels no embarrasment if readers assume they know everything about her sexual history from reading her works. Arthur Frank (1997, pp137) echoes her viewpoint in The Wounded Storyteller, suggesting that

“testimony, with all its commitment to truth and its ability to break through the limits of what its times attend to, is itself another construction of its times…even as “truth” is told, we now find uncertainty. Even in testimony, conciousness struggles to gain sovereignty over its own experience”

This is not an easy read, what humour there is here is very dark indeed. It is all the more disturbing for knowing that this kind of thing goes on, all the time, everywhere.  It is, nonetheless, a brilliant and compelling piece of work.