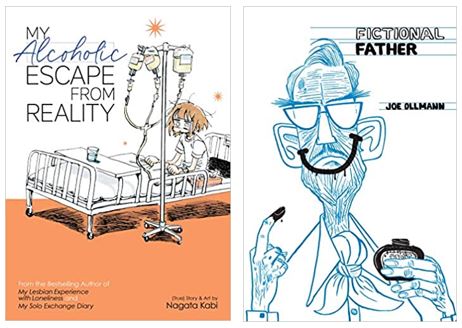 The two stories are quite different in tone. Nagata’s story is a memoir, an account of her several-year binge and eventual hospitalization. Not only is Ollmann’s novel fiction, but he ensures our awareness of this with the book’s title.

Ollmann’s book is gently playful and quite funny, and not the dark whistle-as-you-pass-the-graveyard humor readers often find in memoirs of addiction. Here, the humor is situational and driven by Caleb’s neurotic persona. Caleb dwells obsessively on old resentments and injuries he incurred at the hands of his famous cartoonist father (Jimmi Wyatt).  Ollmann deftly infuses situations with ironic humor, as when Caleb, who doesn’t seem to actually work for a living, muses on his paternal resentments while standing in his outdoor swimming pool by the beautiful landscaped house that his father apparently bought for him.

In contrast to the considered pacing of Fictional Father, Nagata’s manga is a gripping hell-ride. Self-described as an artist with mental health issues, Nagata recounts years of daily binging resulting in a diagnosis of fatty liver and pancreatitis. It is difficult to witness the author’s slow decline and eventual 19-day hospitalization, yet I found I couldn’t put the book down until it was finished.

When we meet him, Caleb’s drinking days are already over, he’s firmly established in Alcoholics Anonymous (AA), and is sponsoring a shaky young man who’s trying to stay clean. Those who’ve been through rehab will recognize the familiar jargon Caleb dispenses to encourage his mentee. It’s refreshing that despite the obstacles and setbacks Caleb faces in the telling of the story, Ollmann does not make use of the facile trope where personal pressures cause Caleb to begin drinking again. I’ve often been disappointed by novelists who think that having protagonists throw away years of sobriety and go on a binge is a way to create dramatic tension.

Before stepping into character as Caleb (evidently Caleb Wyatt and Joe Ollmann have a lot in common) Ollmann himself appears in a droll 6-page introduction, after first warning us he’s going to indulge in “substantial name-dropping”. Comic book fans will appreciate the inside jokes and anecdotes about the comic industry and the people in it. Here you will learn the hidden story of the Dennis the Menace newspaper strip. I won’t repeat it here; you’ll have to read the book to find out.

In the course of the novel Caleb whines about his distant, self-interested father, breaks up with his saintly long-suffering boyfriend, tries to do right by the young man he’s sponsoring in AA and after many false starts finally comes to terms with his father and his legacy. And stays sober.

Ollmann’s cartooning style has been described as “scratchy angular angry big steaming slice of life.” Quite a mouthful, and true. Publisher Drawn and Quarterly deserves a shout out for the attractive packaging of Ollmann’s book. The high-quality binding, vivid color, good thick stock, and a wrap-around faux dust jacket make Fictional Father a pleasure to hold in the hand.

In My Alcoholic Escape, Nagata is suffering from self-described writer’s block (Interestingly, the book did get written, despite this claim), and she fills her time with drinking, actually lots of drinking, and unsurprisingly damages her health. The book moves in time between her hospital stay and her drinking days. Cringe-worthy moments abound: her struggle to get the hospital to remove her IV, the contradictory advice she is given (at least in her telling) on her diet after recovery, waking up drunk and discovering she’d wet her bed.

Nagata’s work tends toward the confessional, which is unusual in the manga genre. She acknowledges a tension between her memoir writing and a desire to write fiction, flip-flopping several times, asserting she changed course several times before deciding to write My Alcoholic Escape. Her parents appear as reluctant characters in her work and I can’t help but wonder how they feel about their depiction here.

The book’s art is simple and uncluttered with the color orange used as a dominant accent. Backgrounds are often blank, giving a clean look to the manga. Her liver and pancreas’ appearances as cartoonish characters somewhat ameliorate the otherwise grim subject matter of Nagata’s novel.

Towards the end of the story Nagata’s doctor advises her that alcohol is “like any drug, you can’t beat it by taking it.” So, it’s disappointing when, on the very next page, despite clear warnings from doctors and a miserable hospitalization, she begins drinking again.  On the last page Nagata tells the reader that “I hope we’ll meet again at the next opportunity.” I found myself hoping so too. Researching her work, I found a fan report who said that at the end of each of her books he finds himself worrying about her. Add me to the list of worriers.

I recommend both these books. My journey through the dark subject matter of My Alcoholic Escape left me feeling wrung out, though hoping for more, but Ollmann’s book is the one I kept reopening even after finishing.