Home / Comic Reviews / Graphic Novels / All the places in between 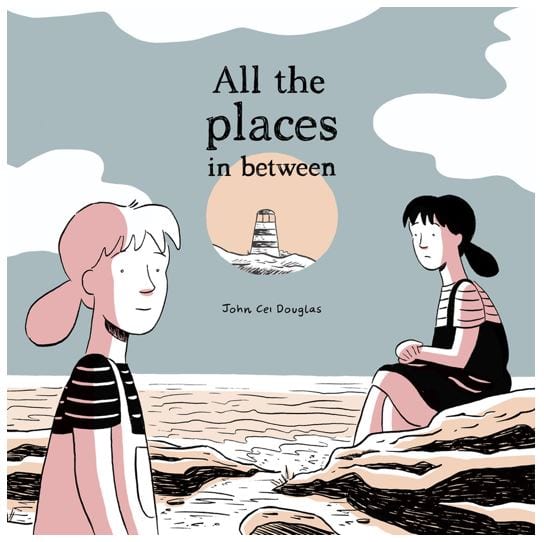 When I look at a wordless graphic work my mind travels with the images and fills out a story—sometimes in pictures only and sometimes in words of my own invention for the pictures provided. I fill in any perceived gaps or explanations of what I think is going on. I have reviewed some graphic medicine works (Something Terrible, Waves) that had few words or emphasized imagery, but none—until now—that had no words, except part/chapter titles. It’s strange that I’ll be giving my review with words, and not my own drawings. If I had the drawing skills, I’d do this review wordlessly; but with my lack of drawing skills, a blank review wouldn’t be very helpful. Mental health is an especially fertile topic for a wordless graphic novel because mental health issues sometimes move in our minds ethereally, though there could also be physical/chemical manifestation causes or effects. Thinking further, my mind moves to a tabula rasa (blank slate)—the reader can fill in/out—which could be a theme of a wordless work. Tabula rasa has two meanings in psychology: First, being born empty with unlimited possibilities—downplaying genetics; and second, the therapist provides none of their own personal information during counseling sessions. I use the former definition here, having my personal history informing my interpretation of John Cei Douglas’ excellent GM work, All the places in between. The few words provided have small letters used, except the literal first letter (A) of the title, to further show how small the protagonist feels. this is a metaphorical work about depression, abandonment, losing control, and finding one’s self. the audience for this work could be those doing counseling, training to counsel, friends and family of those counseled, and possibly those counseled. the latter might have trigger concerns, if their minds go to dark places when exploring metaphors. I highly recommend All the places in between.

the imagery is thought-provoking. the book begins with a coveralled woman’s thought balloon bringing forth her (literal) negative image, which escapes into the starry night (perhaps a Vincent van Gogh—mentally troubled—reference); while her original, positive image, has to contend with reality of a rainstorm on a beach, pushing off her rowboat, sitting at the bow and having no control over the stormy elements. but which really is the positive and which the negative self-image?  if this can’t be metaphorically interpreted as troubled mental health issues, what can? this was the entry to part one … all the places we’ve been 1. adrift. as the sun beats down, her reflection over the boat-side appears friendly, but is giving a false pleasantry when it reaches out from the water to drag her boated self under water. in a four-panel counter-clockwise image (below) she’s rescued/stranded by her negative/positive self. will her opposite lead to loss, darkness/light, hope, comfort, the truth, success, empathy, answers? where? when?

image from All the places in between

metaphors abound in this text, including a lighthouse (for comfort and guidance). there’s a past school struggle under examination—a fraught word—conditions with time moving ever forward while everyone else eventually leaves the room; it’s like Gilbert O’Sullivan’s Alone Again (Naturally) lyrics for All the places in between’s emotional feelings of abandonment and aloneness.

I leave future readers/watchers of All the places in between to find additional metaphors, truths, comforts, and hopefulness in their interpretation of this work. May you find you’re not alone.

John Cei Douglas has contributed to The New Yorker and The Guardian newspaper.