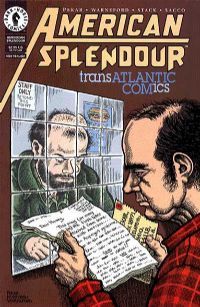 A real-life file clerk in a Cleveland hospital, Pekar has been documenting the quotidian idiosyncrasies of his day-to-day life and work since 1976 in the cult comic series American Splendor. One of the first writers to think that everyday life could provide the basis for comic book stories, Pekar is interesting in the way he goes about making comics, writing the storyline , hiring various cartoonists (most notably Robert Crumb) to do the drawing, and then publishing and distributing the comics himself. British cartoonist Colin Warneford, who has Asberger’s syndrome (or “high functioning” autism) contacted Pekar and they collaborated on this comic. Warneford explains, in words and masterful (Crumb-esque) graphics, what it is like to be him:

“I’ve at least got a new “angle”…. and a damn good reason for doing        autobiographical work -I don’t have any choice, because I am just about the only person I CAN understand, due to my condition…”

Warneford had always felt he was “different” but was only diagnosed aged 31. Interestingly, he felt that being given the “label” of Asperger’s helped make sense of thing. Considered a “total wierdo” at school, he had spent most of his life on the dole or benefits. He’s obviously vey intelligent and internally articulate, but finds verbal or face to face communication difficult,  yet he finds expression through cartooning. He applies himself totally to his task, is never “off duty”, sitting in 24 -hour cafe’s drawing and recording his thoughts. Metafiction abounds, with the author seen drawing the comic we are now reading and then posting it to Harvey Pekar, who is having car trouble back in Ohio.

i like American Splendor, Pekar’s character is an engagingly neurotic and idiosyncratic “everyman”, and this edition is especially relevant to studies of medical narrrative. Warneford’s story is excellent- giving a glimpse into the way his mind works and the difficulties people with ASD’s have to overcome. Even without reading the words, the way he draws himself speaks volumes: the hunched, indrawn posture, the averted gaze, the closed expression, eyes downcast. His observations are funny and he is anxious to avoid both self pity, or a “super cripple” perspective. Its just honest, neutral, gentle but moving stuff. Highly recommended.