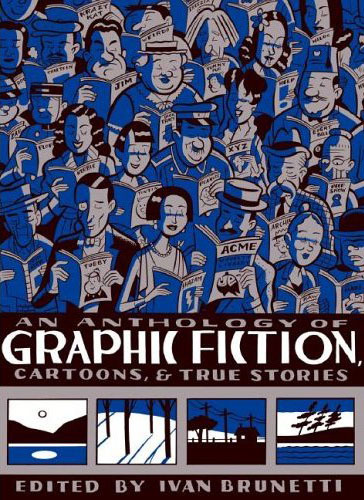 I include this anthology because it has several strips or extracts from graphic novels that are of direct relevance to the examination of medical narrative through graphic fiction. Its also a wonderful introduction to a broad range of comics artists that one might not otherwise come across.  I particulary like KAZ’s sicko “Underworld” series.

OK, with regard to medical narrative: for a start there is an excerpt from Maus, covered elsewhere in this site. Jaime hernandez’ Flies on the Ceiling is concerned with abortion, catholic guilt, and mental illness, the story of Isabel in Mexico and her search for mental peace. Catholic guilt is cranked up to maximum in Justin Green’s excerpt from Binky Brown Meets the Holy Virgin Mary, reviewed alsewhere on this site. Green (aka Brown) had OCD with obsessions that mixed religion and sex. Phoebe Gloeckner’s Fun Things to Do With Little Girls is a brief autobiographical strip about child abuse, a theme shared by Debbie Drechsler’s Visitors in the Night, with its explicit portrayal of the sexual abuse of a young girl by her father. Joe Matt takes confessional comics to the extreem; an excerpt from The Poor Bastard, see him hitting his girlfriend and giving her a black eye! Robert Crumbs Uncle Bob’s Midlife Crisis does what it says on the label, while Chris Ware’s excerpt from Building Stories is a typically melancholic tale of the lonely life of an amputee. Daniel Clowe’s short story Gynaecology is a three chapter tale of an artist who is having an affair with the wife of a singing gynaecologist who takes pictures of womens vaginas to keep in his files. It explores amongst other themes,  the boundaries of professional behaviour and natural human urges.

Finally, and maybe stretching the point a bit, Terry Zwigoff and Robert Armstrong’s Troubles with Gassel deals with our eponymous heroes bowel problems!