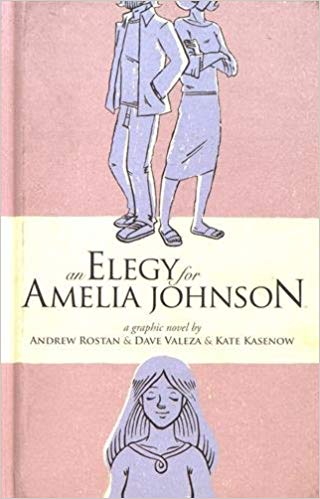 Guest review by A. David Lewis

In his Afterword for An Elegy for Amelia Johnson, writer Andrew Rostan explains the genesis of his book: “I was walking down a street in Santa Monica, musing about how one can tell a story about two elements: love and time. Suddenly, ‘death’ popped into my head” (118). Therein is the problem with Rostan’s book with Davie Valeza and Kate Kasenow: illness is the vehicle for romance. In perhaps a romantic comedy, a coming of age story, or even a memoir that misbalance might be forgivable. For a self-identified elegy and in terms of graphic medicine, this is an issue, one that could, with the blurring of genres, be too easily overlooked or dismissed. Rostan states that the nucleus of his narrative is “one person’s death results in two others falling in love.” Amelia Johnson’s cancer, in turn, becomes the McGuffin – the unexplored cause for the story to take place – thereby giving Elegya very hollow core.

Cancer, of course, can serve as a strong and effective center to a fictional work or even as an entirely secondary plotline to a story. In Elegy, however, the title character’s cancer struggle is almost inconsequential: it serves the narrative purpose that “popped into” Rostan’s head, but never rises beyond the threshold of easy device.

For their February 2018 article for the AMA Journal of Ethics, Linda S. Raphael and Madden Rowell ask in the title, “How Should We Judge the Ethics of Illustrations in Graphic Medicine Novels?” In it, they are guided by a trio of questions, “three principles, suggested by James Phelan in Living to Tell about It: A Rhetoric and Ethics of Character Narration,” in order to help determine the ethical nature of visualizing illness:

When judging Elegy along these three dimensions, particularly in terms of its portrayal and inclusion of cancer, it fares poorly. In fact, all three principles seem imprinted in the challenges of its two main characters, Henry and Jillian – Amelia’s childhood and college friends, respectively, and inevitable lovebirds. Henry, a filmmaker, delivers a documentary on genocide, what he boasts as “a critical gold mine”(17), to the studio executives. His self-professed “two hours of tragedy and human spirit heartstring-tugging” is met with a tepid response. The film is without an authentic center, a genuine connection. The studio executive questions the value behind the work: “What I want, what we allwant, is something from the real Henry Barrons. Something personal. Not this.” Likewise, Jillian, a novelist and magazine writer, has her own work scrutinized and found hollow. Jillian defensively responds that her latest work is “not that bad,” her editor snipes, “‘Not that bad,’ she says. It’s turgid. Limp. Soulless” (20).

Jillian’s product lacks passion, while Henry’s feels insincere; while Rostan appears aware of such pitfalls, he nevertheless falls victim to them. Amelia’s imminent absence is felt by friends and loved ones, but her cancer itself is overlooked. No one else appears to have any history with cancer, she shows little sign of its rigors, and there is no evidence of any support group in her life. (In this, at least, the illustrator could have taken liberties to include incidental materials from the American Cancer Group or a TLC catalogue.) Nearly as casually, Rostan includes the plot point that Amelia, unbeknownst to Henry, once had an abortion (44-45), but at least that is wrapped in some pathos and distanced by time. The depiction of Amelia’s cancer nearly as quixotic as the portrayals of tuberculosis that Susan Sontag decried in her seminal Illness as Metaphor. In a word, Elegyexploits cancer.

This is not an accusation aimed at Rostan and his collaborators. Rather, it is their blind spot. There is not quite enough in Elegy to suggest something post-modern (i.e. that cancer is being under-addressed so as to call it out), though Henry does get distressed at one point in the story that an old flame is using a long-ago tryst with Amelia to fuel his poetry performance. “Wait. Is he seriouslydoing a poem about a one-night standwith my best friend?” and the audience descends into fisticuffs over the purposesof posterity, of remembrance, and of academia (36-37). There is no fight to be had here, no anger to direct at Rostan and his team – just a wish that they had been self-aware enough to expect a similar argument directed at their handling of cancer. An Elegy for Amelia Johnsonmay be a romantic or entertaining book, but it is not a helpful one.

A. David Lewis is an Instructor and Faculty Engagement Manager for MCPHS University’s School of Healthcare Business. In addition to his work as a graphic novelist and an Eisner-nominated religious studies scholar, he both teaches and engages in research on the subject of cancer narratives in comics.