Home / Comic Reviews / Comic Books / At War with Yourself 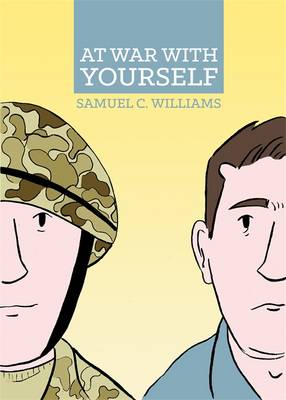 Here is another comic pamphlet from Singing Dragon, the imprint of Jessica Kingsley Publishers that has released a number of titles of relevance to Graphic Medicine, under the stewardship of Mike Medaglia.

The author, Samuel C. Williams, tackles the subject of Post Traumatic Stress Disorder by interviewing his friend, Matt, an ex soldier, who has opened up to him about his own PTSD.  Walking the dog, Samuel asks Matt about his experiences during his 20 years in the army  and Matt, who has been through therapy and so knows some theory, does a good job of explaining how trauma disrupts the processing of memory – leading to anxiety, depression and behavioural problems long after the initial event or events (the comic starts by explaining that PTSD, most commonly associated in the public mind with military personnel, can result from a wide range of different traumatic experiences).

The story is related mainly through dialogue, with occasional narration boxes when Matt is relating a memory. I like this. Overbearing narrative voices are a bugbear of mine. Williams uses speech bubbles more than boxes, as he and Matt stroll through parkland, throwing sticks for the dog and chewing over the subject. Dogs in comics are good, too, and this one provides some added visual action, running around and doing doggish things as the two fellows talk, giving a casual verisimilitude to the visual narrative.

Rendered in subdued watercolours or inks, the artwork is appealing and the lack of slickness adds to the emotional honesty of the work. Williams uses a pallet of tertiary colours – blue green for present-day events and olive drab for flashbacks – with splashes of red here and there to guide the eye through the panels. The drawings are sometimes slightly rough, in a charming way, with some of the pencilling showing through, here and there and the texture of the paper – rough watercolour board – is visible.

This is a great little pamphlet, and a good introduction to the subject. I like what Williams has done here by avoiding the route of exhaustive explanation while introducing enough material to pique the reader’s interest. Most of all, he uses the strength of autobiographical comics to explore a subject through personal narrative, with non-propositional information expressed in the dialogue and the drawing. If you want to study PTSD there are many hefty tomes out there (I have Ben Shephard’s A War Of Nerves on my shelf waiting to be read), but this comic serves as a valuable introduction to this fascinating condition. It might lead some to the realisation that they are suffering from some degree of PTSD, and there is a list of web resources on the last page.

More reviews of this book: