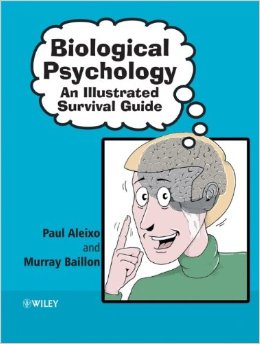 Ever wanted to learn about the interplay of biology and psychology? Biological Psychology: An Illustrated Survival Guide is a great starting point. Written by Paul Aleixo, a senior lecturer in Psychology, and illustrated by Murray Baillon, Biological Psychology’s comic book format makes it visually interesting and more engaging than your average textbook. As a college biology instructor with only one Introductory Psychology course under my belt, Biological Psychology was a great primer for me as I delved further into the field of psychology while holding on to the safety rail of the familiar. This is a book that can be read leisurely by a high school graduate interested in this field or can be used as a supplemental text in a college psychology course.

Narrated by a nameless guy, who for the most part bears the same expression regardless of the situation, Biological Psychology takes you on a journey, beginning with the nervous system and continuing on to the senses, voluntary and involuntary events such as movement, hunger, emotions, sleep and memory and ending with the concept of Evolutionary Psychology. Aleixo provides a comprehensive overview of each topic. To overcome the prose constraints imposed by the comic book format, specific panels on each page have accompanying notes which are included at the end of each chapter. Should you desire more detailed information on a particular panel, be sure to check this out for background information on events, individuals, research and /or results. Aleixo even includes citations for relevant scientific articles to deepen your learning. The multi-tiered resources available will satisfy every level of curiosity.

Imagine being alone in the house and you hear the steps creaking. What happens first? Do you feel fear first and then your heart begins beating faster or do these events happen the other way around? In the book, an attack by an axe-wielding psychopath elicits these physiological and psychological processes! In describing the theory of emotion, Aleixo talks about the James-Lange theory, which states autonomic arousal (fight/flight response) comes before the emotion (fear) and the Cannon-Bard theory which states that autonomic arousal and emotion occurs simultaneously but independently of each other. He then cites recent research that shows neither theory is truly correct (p151-152). The end of chapter note that accompanies this panel mentions yet another theory – the Cognitive-Arousal Theory by Schacter and Singer – for which a brief explanation is given as well as the reference to the journal article (Schacter & Singer, 1962). Aleixo not only explains the concepts, he also highlights historical figures and landmark experiments that demonstrate the evolution of our knowledge of the connection between biological and psychological processes. By highlighting the progression in findings from the earliest to the most recent experiments in each field, he reminds the reader that even the best scholars failed at one point in time, making the reader’s perception of science less intimidating. In some instances, Aleixo takes time to describe the actual experimental set-ups which proves useful when teaching or learning about experimental design (p201-204).

Despite being a great resource, Biological Psychology is found wanting in some areas. The layman will need help with words like “ventromedial” and “paraventricular” as the meaning of these words are not provided in the comic text or end of chapter notes. A word root chart or glossary may be useful in this regard. Content-wise, the discussion of hormones was confusing – Aleixo describes “two types of hormones”: peptide and steroid hormones and then introduces sex hormones as a “third category of hormones” even though “sex hormones like oestrogen and testosterone” are actually examples of steroid hormones (p159). The illustrations by Baillon are sufficient for the needs of the book. Although a few drawings lack anatomical accuracy (e.g. planaria feeding on page 213), they do not detract from the overall message of the book. A reference list provides all citations alphabetically for easy cross-referencing and a subject index provides a topic locator at the tip of your fingers. For less than $50, students can actually learn the core of subject matter and hopefully, their curiosity gets piqued enough to open up the $200 textbook!