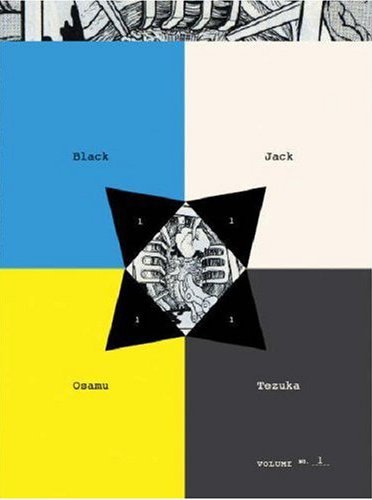 Created by “father of manga” and trained doctor (although he never practiced) Osamu Tezuka, Black Jack is a mysterious and brilliant surgeon who practices without a licence. Distaining mainstream medical institutions and living alone with a cute assistant he fashioned himself (from a cystic terratoma and doll parts!) he is the superhero doctor we would all love to be. Like a cartoon Clint Eastwood character, the truculant Black Jack is called upon by those in need to perform the operations only he can do. Often derided as mercinary  and working only for money, his hard facade secretly hides a heart of gold and the book comprises a series of morality tales.  The brilliant operations he performs with genius are illustrated in detail, although the subject matter is often fantastical (such as brain transplants or using the primative foetal parts from a celebrity’s cystic teratoma to make his assistant!).

There is a lot to like about this book, the characters are often cute, and the illustration very enjoyable. Medical ethics are explored, albeit in a rather Hollywood cinematic kind of way and it might even give some sort of insight into the japanese medical system, although I wouldn’t take things too seriously on that point. Like much modern cartooning, ironic self reflexivity is evident- with a young patient recognising Black Jack from a manga volume he featured in.

All in all a fun, escapist read. Black Jack is a kind of Robin Hood of surgeons: a maligned and marginalised character sworn to help the downtrodden. Stories such as this, although not accurate in a ‘realistic” sense, still provide emotional truths and work, I think, as a form of allegory, providing a role model that might well influence the way that doctors work or encourage medically oriented carrer choices. I’m not sure that I could argue that it provides any profound insight into day to day medical matters, other than reflecting some ways doctors are percieved by society (but WHICH society?) and what that society wishes from its doctors. I’ve just recieved volume 2.