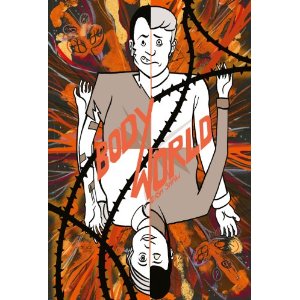 Questions for Dash Shaw on Bodyworld

Q: Bodyworld is about people who smoke a mysterious plant and can then read and feel each others’ thoughts. Where did you dream up that concept? Was there one event in particular that inspired it?
A: When I was in college I was really into figure drawing, and kept being involved in it after I graduated. When you’re drawing someone, part of it is imagining what it’s like to be inside of the person. You imagine yourself in their body, or look for a psychology in the kinds of poses they make or their face. I was also thinking about how to express how people think in comics, in ways outside of the normal thought balloons (which are just words). If you’re doing a book about telepathy, you’re really doing a book about how people think, and what it’s like to be inside of another person. So of course that leads to a strange, confusing, and funny, often goofy, story.

Q: Which character from Bodyworld was your favorite to dream up? Are any of them based on people in your life?
A: The main character, Paulie Panther, was the most fun for me. I think that shows on the page, especially during his interactions with some of the other characters, like Billy Borg. I can’t say that anyone was based on a specific, real person. The characters in Bodyworld are very stylized, cartoony, and unrealistic. I think they come more from my sense of humor than anything else.

Q: Which step (pencils, colors, etc.) is your favorite part of the drawing process?
A: For Bodyworld, it was the colors. I had done a lot of color comics before Bodyworld, but they were printed in grays because I didn’t know what I was doing. Color really freed me up. It was very playful. I work more unself-consciously in color, probably because for many years I was only interested in line drawing and black-and-white comics. It started to feel like my drawings were just an amalgamation of other people’s drawings, how someone else drew a hand or tree, but I didn’t have that baggage with color. The colors then helped my drawing, too. It’s hard to separate the different steps in Bodyworld, since all of the stages were integrated. It wasn’t like I did all of the drawings and then colored it. A lot of the pages moved back and forth between the drawing and the coloring stages. Because I don’t work inside of a system where I have to submit pencils, or ink a drawing and then color it–since I do everything–it allows me not to separate the stages in my mind.

Q: When did you know that cartooning was something you wanted to do full-time?
A: I always wanted to be a cartoonist, and have been doing comics all of my life. I’ve had a lot of friends who wanted to be cartoonists in high school and then stopped in college, and others who stopped after college. A lot of super-talented people stop. It’s a tragedy. I don’t know why I haven’t quit, but I think it’s because I enjoy it so much, while to others the cartooning process seems to be painful. It’s still fun for me. Comics aren’t something that you should want to procrastinate from doing, and they’re more fun to make than they are to read. It’s like a noncompetitive nonspectator sport. You have to keep at it; otherwise you get out of practice.

Q: David Mazzucchelli has called you “the future of comics.” Where do you see comics heading in the future?
A: Right now in bookstores, all of the comics are grouped together: the reprints are right next to the contemporary comics, next to Marvel and DC, next to a nonfiction comic, etc. It’s as if you went into the book store and everything, all of it, was organized alphabetically. So I think what’ll happen in comics is that it’ll become more like other books, in that a Web cartoonist doesn’t necessarily read print comics, in the same way that some romance author doesn’t necessarily read the latest science fiction works. That’s already happening. But that’s unusual in comics. It’s usually been a small community. But, at the same time, I think there will be people who are viewing everything as a whole. So someone will like Robert Crumb, Otto Soglow, and Suehiro Maruo and then make comics that they’d want to read. Everything will move farther apart and also come closer together at the same time.

Q: What are your favorite graphic novels/comics? If you could name five comics that should be required reading, which would they be?
A: Answering that is too much pressure for me. I’m just going to suggest five comics that I read sort of recently, or are fresh on my mind, that I can recommend:
Black Blizzard by Tatsumi
The Clover Omnibus by CLAMP
Color stories by Guido Crepax in Heavy Metal
The recent Art in Time collection, edited by Dan Nadel, especially the Kona comic reprinted in there
New comics by Yuichi Yokoyama

Starred Review. A fantastic follow-up to Shaw’s widely praised first full-length graphic novel, 2008’s Bottomless Bellybutton, Body World treads very different territory. Boney Borough is a pastoral planned community in a dystopic future, where everyone knows each other’s names and young romance blossoms at the high school die-ball games. But like all idyllic suburban communities, Boney Borough has a drug problem, and a newcomer, tweaked-out drug researcher Paulie Panther, takes advantage of it. Panther discovers a new kind of plant in the woods outside town, that, when smoked, allows people to telepathically experience one another’s bodies and minds. Introduced to the local youth, the drug wreaks havoc with Boney Borough in some very unusual ways. First published as a serial comic on the author’s Web site, the print version has added scenes, with gorgeous full-color pages to be read from top to bottom, as if you were scrolling through the story from beginning to end. This is key for the climactic scene, which unfurls in one extended panel. Shaw’s willingness to experiment with his drawing style pays off particularly in pages portraying the effects of the drug with abstract blurring and melding of images. Another brilliant work that is sure to attract loads of attention and praise this year. (Apr.)
Copyright © Reed Business Information, a division of Reed Elsevier Inc. All rights reserved.