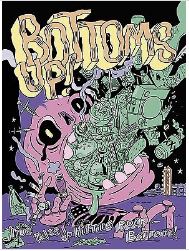 I’ve long thought an anthology by a range of ex-addicts and other sober folk telling their life stories was overdue. It’s now arrived as a graphic novel and that’s surely icing on the cake. Forty-four mostly anonymous souls were paired with cartoonists and then bared all, delivering gripping tales of sad descent and then some measure of redemption. I binge-read Bottoms Up! cover to cover in one sitting and here mention a few of its highlights.

Accepting the premise that these are first person narratives, the mere fact of their telling implies the recovery, or at least continued existence, of the authors.  Thus, in most cases, these stories have happy endings of sorts. It’s sad, though understandable, that almost all of the stories in Bottoms Up! are attributed to the artist only, and I myself sincerely thank the writers who bravely faced themselves and took responsibility for their actions.

At first, I wasn’t impressed with “Shake It Off,” but somehow, I kept returning to it. Artist Daniel McCloskey skillfully sets the mood with pages of dark art depicting nighttime carousing 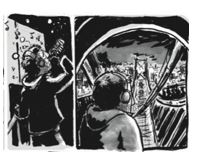 followed suddenly by brightly lit daylight pages. There’s a sense of foreboding created by the way the unnamed protagonist keeps returning to a certain bridge. He’s expressionless for the most part, though we can sense much inner turmoil. Throughout the story he seems to drift along, bouncing off of people and events, though always descending grimly and inexorably toward a frightening resolution, and then a hopeful recovery.

I can’t make up my mind whether Adam Pasion’s cutesy doll house style art undercuts or underscores the seriousness of sex addiction in “Prying Eyes”. This is one of several tales in the anthology which doesn’t concern drugs or alcohol. I’ve often objected when people lump together drug or alcohol addiction

with other obsessive behaviors like sugar dependence or compulsive gambling, but “Prying Eyes” does provide insight into the way sex addiction, in this case hidden camera voyeurism, works psychologically. Though the narrator gets help eventually and comes to understand and control his obsessive behavior, the ending reminds us that families and friendships can be permanently damaged by addiction.

“At least I never did angel dust.” War stories told by recovered heroin addicts, no matter how horrible, are often ameliorated by

that observation. There is a substantial difference between a drug that makes you nod out and one that makes you black out. Dusted, illustrated by Fred Noland, is a case in point. The story covers the last two times the author got dusted before entering rehab; get high, pass out on subway, wake up in ambulance, hospital or jail, then repeat. Fred Nolan’s imaginative art at times resembles Ivan Brunetti’s early work and effectively captures the ambience of getting dusted.

I don’t have much to say about Elegy, other than that the art is by George Wylesol, is far too long at 37 pages, and conveys no emotional impact. Rather than following a narrative and actually telling a story, the authors have opted for the Chris Ware School of Obfuscation, with incomprehensible results. One can only wonder why so much space is devoted to this piece when so little is said. Filler? 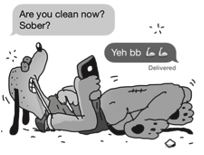 of “real stories told by real addicts” (unless you believe in dope-shooting dogs and enabling robots) they are among the strongest pieces in the book, with artist/writer Victor Kerlow lampooning the sick needs dynamic that often exists between addicts and those closest to them. 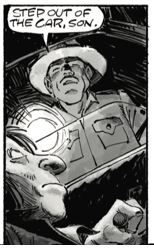 attitudes about drinking and drunken driving were different, at least for some people (the author’s kind treatment by the cops when pulled over for DUI probably would not have gone as well if he weren’t white.)  Fans of Pete Millar’s 1960’s CARtoons and DRAG Cartoons magazines and Alex Toth’s drag racing comics will find familiar influences in Kendall’s work.

In 4 terse pages animator/cartoonist Chad Essley’s “First Time on Crack” effectively conveys the pathos and desperation of a first-time user’s all-night initiation.  When the unnamed protagonist (the story is credited to “Anon”) thinks “If I get 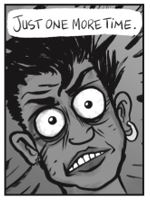 addicted, I just won’t do it again” on page one you know our novice crackhead will be in trouble by page 4. And so she is. I loved the art, though these days I can’t say whether it was done digitally or with pen, ink and brush.

Editor J. T. Yost shows his artistic chops with two stories he illustrated, “Down the Hatch”, a gross-out cautionary tale about making drunken assumptions about the contents of unattended drinks and “Shot Through the Heart”, the poignant story of a heroin addict’s doomed pregnancy. “Heart” is the stronger of 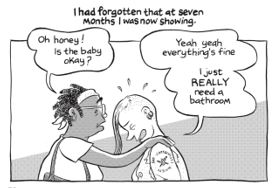 the two tales, and Yost’s imaginative use of action and dialogue overflowing the panels conveys an understandable sense of the shambolic to the story. I noticed that she referred to this child as her first, so let’s hope her further pregnancies were more successful.

All told, Yost deserves a hearty round of applause for helming this project and giving voice to a community not often heard from. After reading this, I’m hoping for more. While some of the stories are better than others, the stronger pieces outweigh the weaker ones, and on balance I recommended Bottoms Up! without reservation.