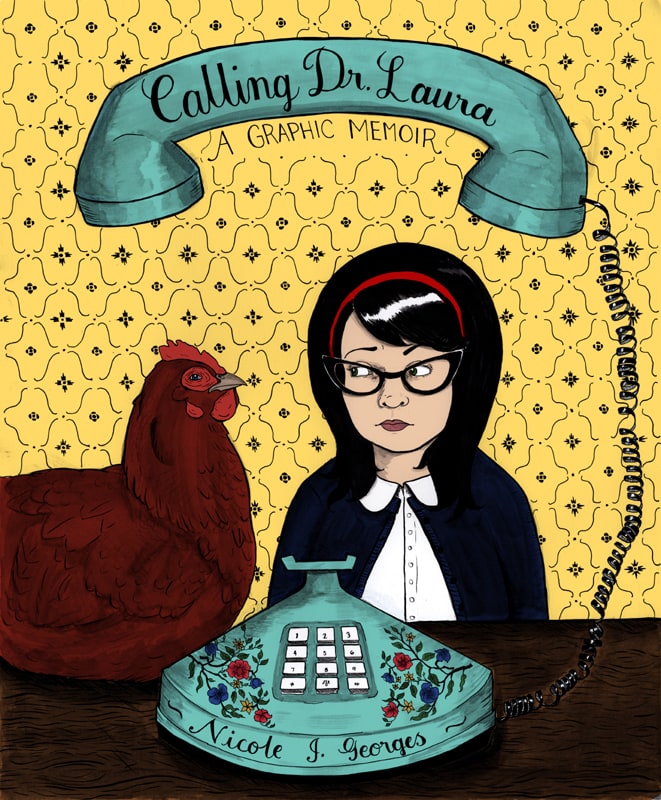 “Sometimes it feels much easier to bare intensely personal information with a stranger than to tell your real friends” (55). This is how the narrator of Nicole J. Georges’s graphic memoir, Calling Dr. Laura, describes why she found herself one day sitting awkwardly on a couch beside an almost-stranger and uttering the secret she had not dared tell any of her friends or family in real life. When the book first opens, Nicole is a 22-year-old living in a small house in Portland, Oregon with her pet dog and chickens. She sports charming cat-eye glasses with thick frames and is pictured sometimes bicycling around the carefully rendered and often idyllic-looking streets of Portland. One year before this confessional couch scene, a friend had taken her to a palm reader who insisted Nicole’s father was alive, even though she had been told as a child by both her near and extended family that he was dead. This is one of several secrets she carries around.

As the story unravels, the almost-stranger on the couch becomes Nicole’s live-in girlfriend and between them they share an adoration of animals, a music scene, and the intimacy that springs from telling and listening to each other’s stories. But a pall hangs over their home, as Nicole’s secret, once somewhat carelessly exposed, comes to stand for a host of mysterious and painful events from the past. Alternating between sharply outlined black-and-white depictions of Nicole’s life in Portland in her adult “present,” and scenes from her past rendered in a less detailed and slightly sketchier style, this weighty book deftly plays with the ways past memories hang at the cusp of the present, waiting to intrude. Nicole recalls her early life with her mother: being introduced to a series of boyfriends-turned-stepfathers and subsequently moving house, first to Florida and then to Kansas; receiving scraps of information about her supposedly dead father in the form of infrequent and unexpected anecdotes from her mother (at a clothing store: “See this hat? I wore one just like it to your dad’s funeral”); and experiencing aggressive bodily reactions to her emotional life in the form of extreme stomach pains.

In relation to that final issue, in a powerful three-page flashback spread the narrator presents us with a medical condition called “encopresis,” in which children who have already been potty trained soil themselves repeatedly. Including in these depictions both references to the medical literature and revealing snapshots of a childhood self visiting doctors and shamefully hiding the effects of her accidents, the text powerfully conveys the anxiety and confusion of a child struggling with overwhelming silences. “Emotional stress may also trigger Encopresis,” the now-knowledgeable adult narrator explains (58), and this understanding stands in stark contrast to the ignorance of the helpless child. Though we never learn what, if anything, comes of these bodily torments, it is clear that as an adult Nicole continues to struggle with the demons from her past. As the plot thickens, she continually puts off asking about the identity of her father, even when his existence is confirmed by her sister, and she simultaneously also avoids coming out to her mother in an effort to avoid conflict. The secrets wreak havoc on her present life, and in a scene paralleling her couch confession she calls on another near-stranger, the infamous Dr. Laura Schlessinger, in a desperate attempt to repair the damage caused by the accumulation of so much secrecy. “You suffered enough. Go have Christmas,” Dr. Laura advises, but the narrator quickly learns that, in contrast to these pithy words of advice, the only way out is through.

With Calling Dr. Laura, Georges the author/artist performs the very crucial confessing, the shedding of secrecy, that her persona struggles against throughout the memoir. We, her readers, become that almost-stranger on the couch, alternately confused, angered, and moved by the course of events unfolding before us. Oscillating between narrative sequences told straightforwardly, and visual metaphors and catalogues detailing the emotional register of this remembered life, this book calls for careful and repeated readings. While the painful emotions of the past prove amazingly persistent, baring them, if only to a stranger, is sometimes the only way to move forward.

Tahneer Oksman is assistant professor and director of the Academic Writing Program at Marymount Manhattan College. Her book, “How Come Boys Get to Keep Their Noses?”: Women and Jewish American Identity in Contemporary Graphic Memoirs, will be published in February 2016 by Columbia University Press, and she is the graphic narratives reviews editor at Cleaver Magazine