Home / Comic Reviews / Graphic Novels / Cancer Made Me A Shallower Person: A Memoir in Comics 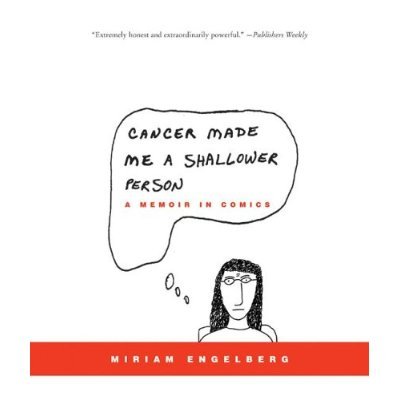 Miriam Engelberg was diagnosed as having breast cancer at the age of 43. She was a computer programmer working in the non profit sector and loved comics, in fact, influenced by Peter Kuper and Harvey Pekar, she drew strip cartoons about her work and published them on line. Obviously a creative and introspective individual, she had previously written monologues and plays about various interests and aspects of her life. When cancer was diagnosed she started to draw cartoon strips about her experiences.

A couple of things set this work apart from Cancer Vixen: unlike Marissa Marchetto, Engelberg was not a trained cartoonist, but her untutored, charmingly inept style lends an air of veracity to the work. Unlike Cancer Vixen, Engelberg’s book does not have a happy ending. Engleberg died a few months after the book was published. It is a collection of gag strips, dark, well observed and funny, rather than one continuous narrative, but it spans the time from initial diagnosis to paliative care for brain metastases. Each strip tends to deal with one particular aspect of having cancer, from the awkwardness of her friends greetings after her initial diagnosis (“social niceties are never quite the same after you’ve had cancer”), through the “why me?” self searching, nausea, wig buying, daytime TV and telemarketeers to depression and despair. There are some choice moments, like Miriam’s encounter with the well meaning, christian, radiotherapy tech Dina and her glove-puppet sidekick, “Cheer Up Kitty”.  Dina is, of course, unbearable, but turns up again later in the book as a changed person, seemingly depressed.

Engelberg railes against the way that her life is reduced to a Kubler-Ross stage, attatched to her diagnosis (“FUCK Kubler-Ross”) and has much to say about the way that a cancer diagnosis stigmatizes and isolates the individual. Despite the air of wackness she is obviously a ruminator, a deep thinker, and the best way to express her thoughts is through her scribbly drawings and handwritten balloons.