Home / Comic Reviews / Graphic Fiction / Charisma Check: A Review of Just Roll with It by Veronica Agarwal and Lee Durfey-Lavoie 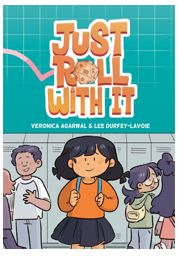 Guest Review by A. David Lewis

Like obsessive-compulsive disorder (OCD) itself, Just Roll with It by Veronica Agarwal and Lee Durfey-Lavoie does not reveal itself immediately. The YA graphic novel betrays nothing on its cover, with its summary blurb, or for the first sixty-plus pages of the story. With no overt initial comment, the narrative follows sixth-grader Maggie as she navigates the new challenges of middle school. Her two older sisters had been exemplary students in their time, so Maggie feels the additional burden to excel in addition to her anxiety with friends, classes, and after-school clubs.

She is immediately drawn to the RPG Club (role-playing games) due to her love of the book series and game franchise Chosen: Adventures in Therendia (or CAT, not unlike LoTR for Lord of the Rings or D&D for Dungeons and Dragons). Her new friend Clara is also drawn to CAT, and the two share an immediate rapport. While Clara is enthusiastic about the extra-scholastic group, Maggie is wary – extremely wary. In fact, it slowly unfolds that Margaret is feeling an overabundance of anxiety, one that requires her to frequently check the twenty-sided die she keeps in her pocket when making everyday decisions. Low rolls mean peril, while high ones, especially a “natural 20,” encourage her to press on. Such rolls might control the lives of their fantasy RPG characters, but Maggie also finds herself constantly deferring to its whims for her own life.

Maggie’s family broaches the topic of OCD with her, and, understandably, she is initially resistant. Her rituals and her rolls are necessary, she claims, lest some terrible fate befall her loved ones and prized possessions. This encompassing fear takes the form, in her imagination, of a menacing white dragon: “Look how I’ve grown. You’ll never best me now.” It is large, and it is scary, and Maggie cannot fight it.

However, she can work to understand and even embrace her fears. “We’re stuck in this head together. […] Because you’re a part of me. I want us to become the safest and best version of Maggie that we can.” As she later shares with her parents, “I think it might be easier if I wasn’t scared all of the time,” and she agrees to meet with a therapist. True to the book’s (lack of) branding, Maggie’s therapist is not intent on labelling her: “As for a diagnosis, we may reach one together, but if we don’t, that’s okay too.” Identifying Maggie’s anxieties and useful coping mechanisms “will help [her] much more than a title or a name of a disease.”

There may be something strategic to Just Roll with Its lack of mental health marketing. If given to a worrisome young reader, after all, buzzwords like anxiety or disorder could deter the book’s reception; there may be some stealth in its happy packaging and Raina Telgemeier-like art style. In terms of the art, some sequences are a little confusing with an interrupted flow (e.g., days pass without much sign of transition). However, in these instances with cause and effect not always clear, one could be generous to Agarwal and Durfey-Lavoie and claim these disorienting passages were intentional, having readers inhabit Maggie’s unsettled space. At over 300 pages, the inclusive, charming story requires a little bit of patience with its pacing but ultimately scores a hit.

A. David Lewis is the Eisner Award-nominated author of American Comics, Religion, and Literary Theory: The Superhero Afterlife and is currently program director for the Master of Health Sciences degree at MCPHS University School in Boston. His teaching and research focus on Graphic Medicine, specifically the depiction of cancer in comic books and graphic novels, and he curates the University’s Graphic Medicine library collection.