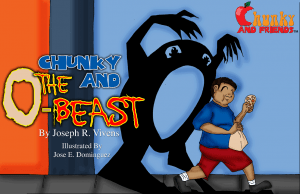 Chunky and The O-Beast is a delightfully relatable children’s tale of a young African-American boy named Chunky and his terror at learning that he is becoming the “O-Beast”. Chunky is your average, fun loving boy who enjoys eating oatmeal cookies with his friends and playing kickball with the other boys at the park. He also has a family that loves him very much and cares about his health enough to notice his increasing weight gain. One day, Chunky is taken to the dreaded doctor’s office, and learns that he is becoming obese. Chunky misunderstands this phrase and he fearfully tells his friends that he will soon transform into the “O-Beast”! The boys think back to what could possibly be a trigger to and they come to the conclusion that one must transform every time one eats something that starts with the letter “O”. When they realize that they both ate oatmeal cookies earlier that day, both boys become hysterical, running to and fro until Chunky’s parents step in. Chunky’s mom sits them down and explains to them that they won’t turn into monsters, but that Chunky is in danger of developing health issues because he weighs more than he should for his age and height. Chunky’s mom insightfully uses the children’s imagination as a teaching point and goes on to say that Chunky should think of it like he’s a hero and it’s his job to defeat the O-Beast!

In particular, I really appreciated the silly humor and light-heartedness of the cartoons and illustrations. They serve to augment the story’s ability to captivate young audiences. In fact, it’s such an enjoyable read that once you finish reading it, you realize that you actually learned from it, and that the learning wasn’t a struggle at all! I also really appreciated the relatableness of the story, in particular, it captures Chunky’s encounter with his doctor’s appointment so perfectly; the fear that most children have of needles, the didactic relaying of information by the doctor, the wandering dreams and active imaginations of our youngest members of society.   By captivating the imagination and hearts of children and adults alike, this book serves as a great learning tool to teach about the dangers of obesity and how to fight against it.