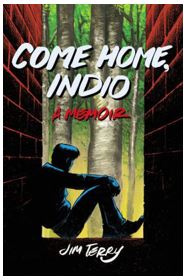 Come Home, Indio is the story of the author’s life. This memoir begins with tales of parental love and gut-wrenching instances of family drunkenness, and arcs through Mr. Terry’s own drinking years, eventual recovery and ends with the protagonist finding a kind of peaceful resolution, finally coming home by becoming a water protector fighting the DAPL oil pipeline in North Dakota.

Mr. Terry describes his unsettling upbringing and his own frightening years of hard drinking vividly and honestly, with a large dose of gallows humor. The writing is crisp and moves the narrative along efficiently, telling his life story honestly and reflectively, though it takes the first hundred pages to get him off to college. These childhood horror stories explain the formation of Mr. Terry’s insecurities but I found myself wishing the pace of the first half of the book were swifter. Still, one childhood anecdote contains a precious quote about comic art. When a grade school teacher complains to Jim’s mother about his morbid drawings, his mother opines “What kinda dumbass art teacher doesn’t know who Frank Frazetta is?”  Yes, indeed!

Mr. Terry’s art reminds me at times of Jack Davis (see the full-page sketch of Mr. Terry’s father playing bass on page 185), uses shading effectively, and skillfully ages the characters as the story advances.  He does an especially good job of rendering the horror of his youthful drinking binges and blackouts.

Jim Terry spent an insecure youth shuttling between the households of his divorced alcoholic parents, with occasional peaceful respites at his paternal grandparents. DrugRehab.com claims that more than 50% of the children raised by alcoholics will themselves have problems with alcoholism, and although there is no citation given for this statistic, most of us can cite anecdotal evidence supporting it. As Goethe said “He is happiest, be he king or peasant, who finds peace in his home.”  With a Native American mother and white father, the protagonist grows up straddling these two worlds but never feeling completely comfortable in either. His insecure home life is thus mirrored by feelings of alienation in the outside world.

Dark humor permeates the author’s retelling of his recovery through AA meetings.  Those of us who’ve gone through the process of cleaning up from drugs or alcohol will recognize the bonding that ensues between recovering alcoholics by sharing these “war stories”, tales of awful behavior and sad deeds accomplished while under the influence, which outsiders usually find morbid and not at all funny. I found myself cheering him on, urging him to stay sober and find himself.

When in the last chapter Mr. Terry joins the water protector’s movement fighting against the Dakota Access Pipeline, he finds acceptance from the community of politicized natives he meets during the struggle, and eventual homecoming. A fitting coda.

_________________________
Retired high school math teacher, Gene Bild has been a comic fan for most of his life. He has published pieces in The Italian-American Review and The First Literary Review East, and lives contentedly in Chicago with his wife and two cats.