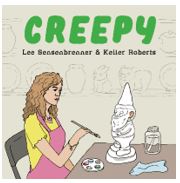 Creepy by Lee Sensenbrenner and Keiler Roberts is creepy. I won’t give much away about this graphic novella, except to write if taken seriously, then medically it includes cartilage amputation, obsessive compulsive eating disorder (my diagnosis, though not a diagnostician), and child abuse; but it’s really an allegory against digital device obsession whose protagonist looks a lot like Keiler Roberts’ cartoon avatar and it’s a horror story for children. It’s short, pithy, and, did I mention, creepy?

Keiler Roberts’ The Joy of Quitting is a very honest, bare (sometimes naked) portrayal of her parenting with her young daughter, Xia, homelife with daughter and husband, Scott, and connections to her friends, parents, and medical concerns. She doesn’t use pseudonyms about medical treatment centers and other locales, which I recognize. Here and there we learn something about Roberts’ creative process. I often wonder when she writes her stories. Does she immediately go to her drawing table right after the event occurs, or does she gather them in her head to put on paper later? There’s plenty of goofiness and seriousness—sometimes within a few panels, such as, rules that are announced sometimes might be quickly humorously contradicted. I highly recommend The Joy of Quitting for its humor and emotional connection, though its medical content often lacks educational depth.

There are some medical-related comic strips that some might interpret as funny, tragic, or just making conversation. Such as (Roberts on the left with Xia to her right in the last panel): 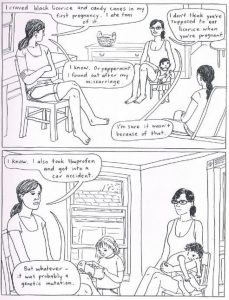 The Joy of Quitting, page 34

There are short pieces that are medical related. Roberts made a list of “perceptual disturbances” that her psychiatrist indicated might be “temporal lobe seizures.” Sometimes she hears something that’s not said or sees something peripherally that’s not there, sunlight might appear to strobe, something real suddenly appearing seemingly from nowhere, distances are distorted, wrong odors smelled, among other sense misperceptions. “My psychiatrist says they’re illusions, not hallucinations” though a thesaurus would call these words synonymous. The neurologist doesn’t think its seizures or a brain tumor and orders an EEG (electroencephalogram; measures brain’s electrical activity) with results: not epileptic or psychotic. The neurologist explains, “I’ve known artists. They truly see the world differently. Their brains are different. Most of them are weird but you’re not weird. I can tell.” To which Roberts thinks, “Doctors are so weird. [58]” Later, Roberts’ moods swing pretty fast from euphoric to angry in six panels, leading her to spend a week voluntarily hospitalized for bipolar disorder support. She explains the disorder to Xia, so Xia won’t get a confusing explanation from someone else, who perhaps reads about it in a book, like The Joy of Quitting, but there’s only so much a five-year-old can comprehend.

Roberts caught the chicken pox at the end of her high school sophomore year and felt exhausted the next fall semester. She admired her then junior year math teacher; but, when Roberts became a teacher herself, she resents “chronically sleepy students.” A doctor—back in 1994—told her she might have chronic fatigue syndrome (see the recent review of Notes from a Sickbed by Tessa Brunton that covered this topic) but she got better that year and decided “it was probably depression. [87]”

At a street fair, Roberts—at a weak moment—makes an inexpensive appointment to see a chiropractor all the time thinking it’s a scam. She then depicts an earlier free visit to a different chiropractor, then neurologist, then back pain presumably from that earlier chiropractor or neurologist visit, then a new visit to street fair chiropractor with lots of follow-up appointments made. Back home, Xia presses on the back of her doll with Roberts telling Scott, “Everything I do is just material for Xia [97]” … and vice versa.

And there’s a lot more medical topics that arise, including … Xia’s birth (119-123), … white male ob/gyn giving bad pregnancy stories (or jokes?) … unscheduled time leads to anxiousness … sadly euthanizing their dog, Chili … questioning if “too much health” is possible (with the most hilarious chit chat joke). Roberts’ sister has MS (multiple sclerosis) and Roberts tries to find out if she does as well … her sister tells Roberts,’ “I think you have bipolar with a touch of MS, and I have MS with a touch of bipolar [161]” … Roberts has a spinal tap (aka lumbar puncture) which gave her a two-week headache … diagnosis: “white matter brain lesions, demyelination, MS diagnosis, painkillers with MRI’s after visit summary, vision problems (due to) anxiety [167].” Roberts gets second opinion ….  On other occasions Roberts discusses worst case scenarios related to C-sections … asking Jesus to help her pee in a bedpan. Xia learns about death from pet rats a few days after acquiring them from a pet store. Roberts got the rats to not think about MS though their initials are Mateo and Sammy or MS! Roberts writes about favorite things that might be lost if she has MS: vision, walking, energy, memory, “the whole point of doing anything [169].” Xia has dolls who get sick … an indication of her mother’s influence?

Roberts mostly draws single panel or single page multi-panel comic strips; and infrequently has a multi-page story as when she has six pages (101-107) of cleaning and organizing her house mostly wordlessly, except when Scott brings in dirt and leaves on his shoes into their home. We get 8 pages of various people’s favorite or least favorite things (130 – 137); starting with ‘My Favorite Things’ (from Sound of Music, Rodgers & Hammerstein, 1965) being Roberts’ least favorite song.

After a new rule is given, we see Xia push the boundary to hilarious effect; as in where she’s permitted to use “naughty words.” Roberts also violates that rule, too.

Breaking the fourth wall, Roberts walks outside with earphones talking on the phone and has in her word balloon: “I feel like someone is watching my stupid thoughts [233].” Xia asks for an event to not be put in a comic, but later allows it to happen … otherwise I wouldn’t be able to mention such an occurrence here. Scott questions whether any of Xia’s classmates will see any of these comics and make fun of her. Roberts pictures Xia being either “good at defending herself [70]” or, if she had been left out of the comics, would be upset and say, “I feel so excluded … I know nothing about my childhood … [71]” And Roberts concludes with a note—at the end of this strip—to Xia: “I’m sorry if my comics ever cause you trouble. I don’t know which way it’s going to go. I love you! [71]”

Published earlier (May 2021) My Begging Chart is hard to review when I just finished the review of The Joy of Quitting. I don’t want to be flippant, but it is similar with comic strips and stories taken from Roberts’ life, except there are more non-sequiturs. As a friend of Roberts puts it: she’s either hurtling (or ¾ the way) towards enlightenment or psychosis. Roberts continues the honest portrayal of her person and thoughts for the reader. Oddly, Xia appears older in My Begging Chart, though published before The Joy of Quitting.

A few of the vignettes follow. Roberts lets Xia eat an ice cream cone on the way to a dentist appointment! After baking brownies, she finds the mix is eighteen months past its expiration, so Roberts tosses them into her garbage disposal narrating, “This feels like a metaphor for the last year” … perhaps thinking of COVID-19 and spending time on something and having nothing to show for it.

Roberts tells Xia that Xia saw a squirrel’s—not a bird’s nest—but Xia doesn’t believe her … and Roberts wonders why Xia doesn’t accept Roberts’ adult knowledge … followed by flashback of Roberts a few years before when she told Xia “Oops, you missed it. I just saw a unicorn go by while you were looking at me. [40]”

Roberts shows several mental health therapy sessions; she pictures her thoughts as cicadas clinging to her and their removal allows her to let go of them (e.g., “some dumb thing I said,” 47). Roberts gets a cooling vest (available from the Multiple Sclerosis Association of America) for her MS because of heat sensitivity and not caring about “looking like a dork. [66]”

Many non-sequiturs occur in a four-panel page about how much the 4th of July is a holiday she hates when she discusses panic attacks, air conditioner not working and staying in her basement to stay cool on an air mattress with a slow leak, an insane world this holiday showing what’s wrong with humanity, and lots of medical test results for the past three years which if bad might help her feel better about the world, and finally, making coleslaw for the holiday (74).

At times Roberts is found tearful sitting on the floor with Xia trying to cheer her up. The book closes with Xia’s Begging Chart.

I enjoyed Roberts’ memoir comic strips in The Joy of Quitting and My Begging Chart and highly recommend both for their humorous stories about parenting and family life.