Home / Comic Reviews / Comic Books / Depresso or: How I learned To Stop Worrying And Embrace Being Bonkers! 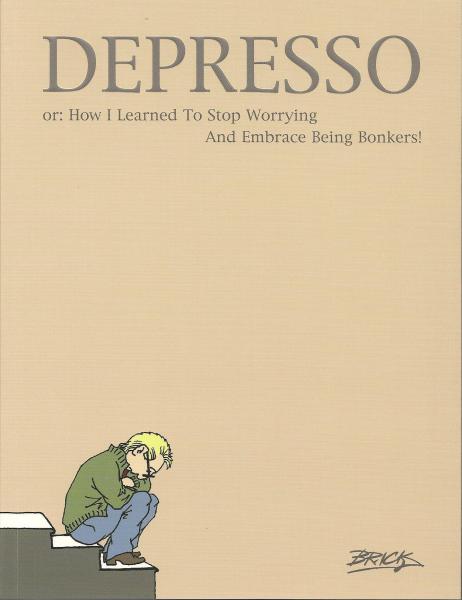 ‘The world is plagued by madness. With leaders bent on insane policies and too many citizens locked in crippling depression, normality seems elusive and questionable. Part travelogue, part indictment of mad medicine, Depresso is Tom Freeman’s hilarious journey through the vagaries of the system to emerged scathed but content with being ‘bonkers’. The story unfolds over several years, in China and the UK, during which anti-depressants reduce Tom to a zombie and alternative therapies drive him to comic re-examinations of his life, his work and relationships.’

‘Brick’ is the nom de plume of John Stuart Clark, who has been producing scathing political cartoons for pressure groups, trade unions and NGOs for the last twenty years. Or rather was, until a four year bout of depression brought a sudden halt to his output.

The creation of this substantial graphic novel, it seems, partly facilitated his recovery, his coming to terms with his inner ‘Depresso’. This semi-fictional story follows Brick’s graphic avatar- wry political cartoonist Tom Freeman- from the initial somatic symptoms of his depression, through suffering, failed treatment- both orthodox and alternative- to recovery, via various side stories and tales of travel.

This is a bit of an angry book. Freeman is, by his own admission, a ‘mard arse’ (www.urban dictionary.com defines this as ‘A person that relishes in expressing his/her discomfort vocally at all times’), steeped, it seems, in anti-establishment vitriol, firing invective at many of the people who cross his path. Nevertheless, things start gently enough, with an interesting portrayal of the way that depression creeps up on our unsuspecting hero. Tom’s symptoms are, at first, purely physical: he has a terrible pain in his testis and convinces himself he is dying of testicular cancer. He retreats to the spare bedroom to spend his nights alone with his agony but, being an independent minded sceptic, he eschews medical help for some considerable time. When he does eventually seek an opinion he is completely thrown by coming face to face with a female GP and refuses to reveal his problem. His second consultation, with a bearded male GP gets straight to the root of the problem. Dr Matterhorn, who likes climbing, tells him there is nothing wrong with his gonads, but he is most certainly depressed.  His decreased motivation, anger and avoidance of sex are certainly clues. Dr Matterhorn explains that he is depleted of serotonin and prescribes an SSRI. Tom takes the script but immediately sets to work demolishing the reputation of ‘white mans medicine’. Does he take the tablets? He does, although rather haphazardly it seems.

Brick is adept at constructing arresting visual metaphors to effectively communicate the symptoms of depression, demonstrating his mastery of the cartoon medium. The image of Tom entombed in wet, shrinking concrete stays with me. Using both words and pictures, he describes the condition well: the bewilderment, the terror, the feeling that part of him had died, Tom is consumed by loss and sadness. Comedy is supplied by a funny animal: from early in the story Tom is shadowed by an imaginary anthropomorphic white lizard. It seems unclear what exactly this creature represents, but it serves as a graphic literary device which enables Tom to hold a two-way conversation with another character, neatly sidestepping the problem of how to represent his inner thoughts over prolonged stretches of narrative.

The book is described as ‘part travelogue’ and covers Tom’s trips with his partner Judy. During their visit to China, removed from his everyday surroundings, Tom perks up to such an extent he stops taking his pills regularly. As he becomes immersed in Chinese culture he falls in love with the country and people and is soon bemoaning the invasion of western drug companies, a threat to the holism of traditional Chinese medicine, which lacks the cartesian divide of mind and body we purportedly suffer in the west. He remains in moderately good form while away from home, but on arriving back in Britain, exposed to familiar cues, a stress response kicks in and his mood takes a sudden and devastating nose-dive, forcing him back into contact with the NHS.

The third GP Tom consults, Dr Twitch, is a hyperactive comics nerd, au fait with the works of such greats as Steve Ditko and Joe Sacco. A rare find, one might think, but Tom is nevertheless  disappointed to ‘only walk away with pills’. The one professional with whom he bonds is Dr Hugg, a retired psychotherapist who shares a similar worldview to his own. Dr Hugg, whom he sees privately, suggests that he is emotionally underdeveloped and has appropriated the fear and suffering of others during his long years of campaigning and satire. Tom does get NHS treatment as well, but finds the counsellor to whom he is assigned too attractive and the pychodynamic psychotherapist, one Dr Callas, patronising and lacking in humanity. There are some astute observations floating in the vitriol, such as Tom’s assertion that healthcare professionals carry a morbid fear of client suicide, and that their constant checking on their clients’ status has more to do with this than with patient well-being: ‘do they want to know if I am well or safe?’ he irritably demands.

The book castigates society for stigmatizing mental illness while professing Tom’s own embarrassment at his own problems and ironically labelling fellow sufferers ‘head cases’, ‘psychos’, ‘fruitcakes’ or ‘wackos’. His tales of turning up to self help groups to find himself among people with whom he has little in common bar a diagnosis have a cruel veracity. He epitomizes the plight of the individual who, saddled with an unsexy diagnosis, is torn between championing the cause of the sufferer and rebelling against his lot. It does not seem entirely clear that Tom does indeed embrace ‘being bonkers’.

The story examines with considerable honesty the toll that depression can take on the people close to the sufferer, and the introverted, self absorption of the suffering martyr. Tom prides himself on his self sufficiency, but when he is depressed this otherwise admirable quality morphs into a repelling, closed-off hostility. His friendships suffer and his relationship with Judy almost fails. The difficulties owning up to depression within other cultures are also discussed: Tom’s friend and fellow depressive Naz, a muslim, is terrified of being seen with him in case his secret is revealed to members of his own community, fearing a visit from the Imam.

Can spending one’s life cataloguing and satirizing the iniquities of a corrupt and ruthless world lead to chronic changes in mood and personality? Or are those of a suspicious and melancholic disposition more likely to spend their time ruminating on the cruelties and malefactions of mankind? Tom states that the lunacy of the world, the hypocrisy and inequities, had worn him down. He was, it seems, burnt out and had tipped over into depression. It seems the ultimate cure was a long walk and a new pet dog. As the credit crunch brings the economy to the edge of collapse, Tom seems to cheer up, perhaps through having his anti-capitalist views at least partly vindicated. He walks the Pennine way alone and arrives home rejuvenated to be met by Judy and a new companion: Kaz the sheepdog.

This is a singular semi-autobiography, a wry self study and an act of catharsis, with something of an axe to grind against pharmacological psychiatry. Brick’s sentiments may offend some healthcare professionals who might have taken more notice had the polemic been toned down, but there are some ideas here which Medical Humanities scholars will recognize and which are worth teasing out further. The book will be of interest to mental health professionals and theorists, and might serve as the basis for discussion of some of the knottier questions surrounding the way we view and treat depression.