Home / Comic Reviews / Educational / Diabetes is After Your Dick! 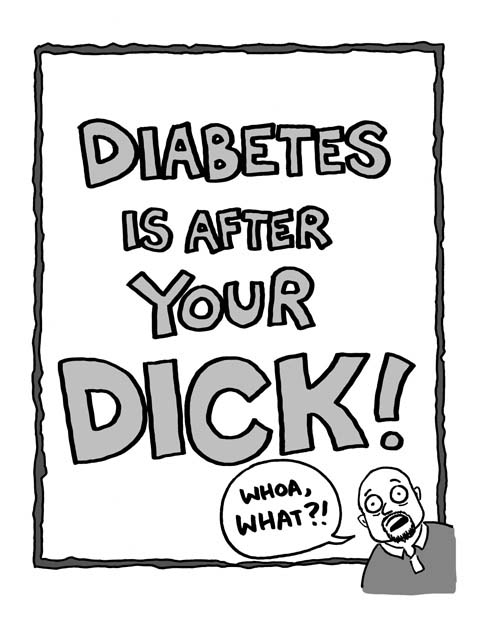 Cathy Leamy (Metrokitty) has put her comic “Diabetes is After Your Dick” online. It is also available for purchase from her site. Leamy presented on this patient education comic at the 2012 Toronto Comics & Medicine conference. The podcast of her talk is here.

I chose to review the comic “Diabetes is after your dick!” among a bunch of books because the title was so fascinating to me. Diabetes, relating to dick? How interesting!

It is really interesting the way the author explains diabetes in a different way. The author shows how people usually think about having diabetes: three characters in the comic say if sight is getting worse due to diabetes, we can do laser surgery. We can get a stroke even if we do not have diabetes. Also, one of the character says if I lose the foot, I can dress up as a pegleg Pirate for future Halloweens. However, the characters start to pay attention to the danger of diabetes when the author says diabetes also effects their genitals. This works so well to grab people’s attention. We are so familiar with “diabetes”, and everyone thinks they already know too much about it. For example, when we eat too much sugar, it causes one kind of diabetes. In order to give fuel to cells, which help us to digest, insulin is needed. Diabetes means insulin is not available from the pancreas.

When the question, “Then, what is the Insulin?” pops in my head, the author describes it as a delivery guy with cute characters. The delivery guy says that “CELLS ARE HIS CUSTOMERS!”. Thanks to this easy-explanation, I could not get lost my thoughts. In fact, when the author explains the progress of digestion, I almost lost my attention. The reasons are not only the huge amount of words but also the fact that the author hand-wrote them. Even though the hand-writing is visually appealing, it is more difficult to read. If she used traditional fonts, the information would be more easy to access to understand the information she wants to convey.

Furthermore, the author explains about how diabetes gets started. When the customers, which means the cells, do not receive packages from the delivery guy, which is Insulin, the delivery guy just puts the fuel in front of the door of the cells. These packages start to stack on each other, and this becomes a mess in the road, which represents the blood vessels. The author explains how diabetes is caused with ease by using comics. This is a really good case of taking advantage of the comics method. Since people normally find it difficult to understand the process of diabetes via academic books, the author uses drawings to make it easier to understand for viewers.

After the author explains the reason that causes diabetes, she starts to prove why diabetes effects erections. As the blood vessels blocks cells from going though, they can not go to the penis to make it stiff.

I love the next scene. The people who used to underestimate diabetes become active toward preventing it. The solution is keep moving and keep reducing drinks and sugar. After that, a character among them, pretends to die because he already has diabetes. However, the author says it is never too late to fix it. He recommends those patients try to change their routines and see doctors.

I love how the author uses the narrative to convey important information about diabetes that people easily can get. She chooses an interesting topic, erections, and makes people pay attention. After, she describes the issue for viewers to understand easily and make information accessible.