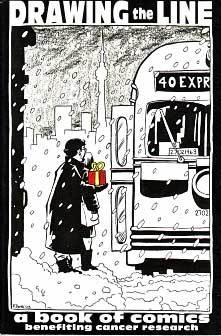 Many comics listed on this site, having come out of the alternative and underground scene, tend to be critical of the healthcare systems. It is refreshing, therefore, to read a comic that was created specifically to aid the system and raise money for cancer research and dedicated to healthcare professionals.

In 2002 Suley Fattah, a famulus (magician’s assistant), illustrator and comic book collector, was diagnosed as having Hodgkin’s Lymphoma. His friend Ron Boyd gave him a drawing (seen on the cover of DTL) for his 40th birthday in 2003 and the image gave Suley the idea of compiling a collection of comic strips into a book to raise money for the Sick Children Foundation and Princess Margaret Hospital, thus ‘giving back’ a gift to the community.

Suley persuaded many big names in Canadian comics, and some from the US and Europe to take part: the book includes contributions from Chester Brown, Dave Sim, Dean Motter, Stan Sakai, Moebius and others. The project has, to date, raised more than CD$50,000 with all proceeds going to the chosen foundations.

As might be expected, there is a diverse range of work in the book, from stand-alone drawings to multi-page stories. Some have specifically medical subject matter (such as ‘The History of My Guts’ by Marcel Guldemond), some not, some are funny, some tragic and some plain surreal, one of my favourites of the latter variety being Chip Zdarsky’s ‘Prison Funnies’.

In 2006 Suley  produced a second compilation, this time of 150 pages, entitled Drawing the Line Again. It has some great work in it, I particularly like Kagan McLeod’s Dr Yesteryear in “Let it Bleed”.

I believe that limited numbers of DTL and DTLA  are still availiable. When I ordered them, I was thrilled to find (in addition to a dedication from Suley Fattah), that my  copy of DTL was signed by several of the authors.

Is a Canadian comics artist and teacher. He drew this strip for a book was called Drawing the Line which was put out to raised money for cancer research by Suley Fatah. The strip was pencilled and lettered by Kasman and inked by R.G. Taylor. Kasman worked for DC and Eclipse comics as a letterer, and Image Comics as a writer, penciller and inker and has worked for many other smaller companies contributing to over 80 comic books in all. Two of the characters he drew (Captain Canuck and Fleur de Lys) were issued on Canadian commemorative postage stamps in 1994 and were the best selling postage stamps in the history of the nation. His book on William Lyon Mackenzie and the Rebellion of 1837 was distributed by Lieutenant-Governor James K. Bartleman as an important part of his literacy campaign and Kasman’s work has been featured in galleries on three occasions. he recieved two awards for his teaching, one province wide, one within his county.

Drawing the Line was a 104-page anthology  which came out in May 2004.It was done in conjunction with Princess Margaret Hospital, Toronto and contains work by many of Canada’s foremost cartoonists, some American artists and French Comics master, Moebius. There was a follow up, Drawing the Line Again, which was published a year later and included work by Clive Barker and Jean-Claude Gotting.
The goals of the Book of Comics project were:

to raise awareness of health and well-being through graphic novel storytelling;
to raise significant funds for cancer research at renowned institutions;
to partner new comic book artists with seasoned professionals; and
to introduce and share graphic novels as an art form with new readers by enabling those unfamiliar with comics in discovering this medium.

go to the Benefitcomic site