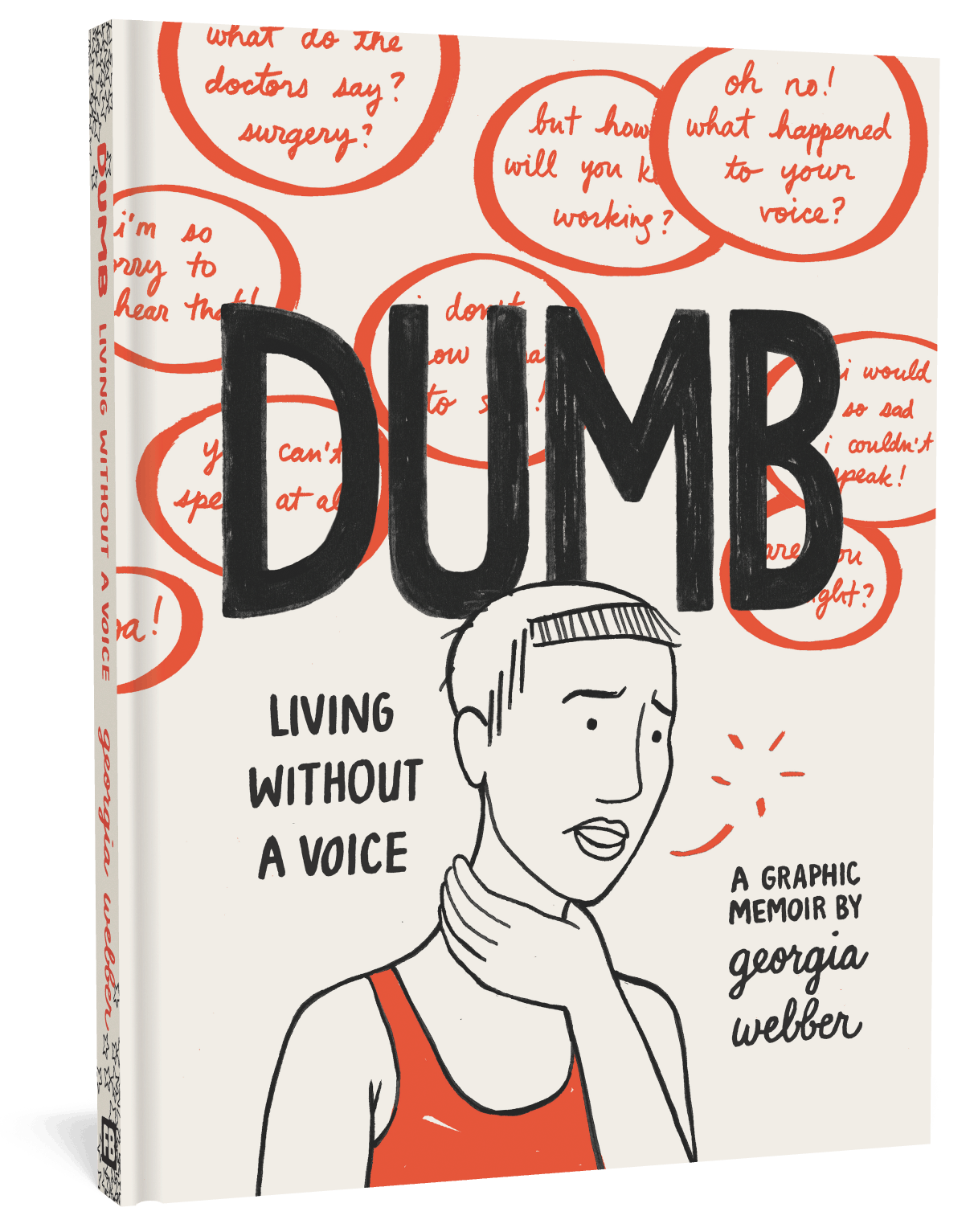 If I had to give a one word description to this graphic work it would be “Loud” or if two words: “Brilliantly Loud.” Dumb: Living without a Voice, a Graphic Memoir by Georgia Webber is brilliant because it’s a very smart work and because it’s visually stunning. This work is in black and white, with the loudness coming from the orange/red portrayal of the author/artist’s and everyone else’s voice. This graphic work shows the changes, often wordlessly, that Ms. Webber goes through to recover from the loss of one of her essential characteristics: her voice. Early on she makes a to-do list, including: telling friends, finding a silent job, and seeking financial sources for her disability. This is a very personal, emotional work and isn’t meant to provide many medical technical tools. It does help one empathize with the frustrations connected with losing an ability that had been so important to one’s character. I highly recommend this graphic work.

The images are mostly simple black and white line drawings which are almost outlines of figures with little or no backgrounds or shading. The word balloons, narration boxes, and chapter headings are orange with thick or dotted lines. Dumb begins with Ms. Webber’s return from TCAF (Toronto Comics Art Festival) and a dotted orange balloon “wow, i know i had a good time when my throat hurts this much. gotta rest up.” The orange dotted balloon not only means it’s a thought, but that her voice has weakened. Most of the early balloons have scribbled, unreadable conversations among friends and at her job (waitressing?). The time moves rapidly with page headings (May … June … July … ) with a near constant stream of conversations as Ms. Webber’s voice moves from painful to coughs to the realization: “Arrrgh, i need to stop talking somehow” in August; then to a doctor’s appointment in September. A two page spread shows Ms. Webber with an orange scribbled “(ouch)” balloon lying in a bed of stars symbolizing pain.

The longest conversation occurs between her and her doctor, mostly with floating word balloons, leaving the reader to decide who’s speaking from content. The doctor seeks background before examining her throat. Her throat now hurts “all the time” not just when she talks. With too much talking the pain “is all over my head and neck.” The author provides some technical information: that she’s given an anesthetic by sniffing it and the doctor looks down her throat with a bronchoscope. Information not mentioned in the graphic work, at least initially, is that the doctor has an ear, nose, throat (ENT) medical specialty; and they’re also known as otorhinolaryngologist or otolaryngologist for short. He finds no nodules, nor abnormalities “so no cancer.” He says, “You’re what we call a vocal abuser.” He indicates that it takes a long time to get better and that he will check back in “about … six months.”

Now we see the long process of Ms. Webber doing her normal activities, except without talking. And because talking was such a part of her, this process is not at all normal! It’s agonizing with lots of tears. Her black-inked (voiceless) self fights her orange-inked (voiced) self for control until they come to an understanding. She has to make big changes in her life (quits waitressing, seeks welfare temporary disability assistance, raises credit card limit, and stops talking). Inquisitive word balloons float on a page with no people; leaving the reader to answer them for Ms. Webber. One asks “is it laryngitis?” without answering that Laryngitis is an inflammation of the vocal cords which could be caused by an infection, a cold, or overuse; and it’s usually short-term.

She starts communicating in other ways. She writes (in orange, of course), gestures, and has a friend who can read lips. Her silent mouthing appear with pencil words. She “crave[s a] … tactile experience of voice.” Writing becomes her primary speech. The wonders of technology have Ms. Webber move on to texting; where the person next to her speaks and she texts back. Perhaps her most telling moment is when she defines comics; though you, dear reader, will have to buy the book for her definition.

Her emotions range widely: sadness, frustration, fear, calm, self-pity, loneliness, and boredom; for example, fear of attracting someone only because she’s silent. A friend (counselor?) suggests leaning on those Ms. Webber knows and not worrying about meeting new people. She starts making comics again … she had stopped for several years. Being told that her voice sounds “sexy” isn’t helpful but upsetting; and doesn’t prompt her to talk. This event reminds me of a scene in the movie Children of a Lesser God when William Hurt’s character pushes Marlee Matlin’s character, who’s deaf and hasn’t spoken, into speaking painfully, when it’s so clear she never wanted to! Through many wordless images, empty word balloons and orange scribbles then solid orange circles over her throat she shows the reader what “it feels like” to not speak.

Does she get adequate medical and financial support from her government? If the reader knew she was Canadian from Montreal, would you think her governmental support might be more supportive than if she was American? She still has to provide an ever increasing and frustrating amount of documents for her requested aid. The fact that it’s in un-translated French may cause some readers to feel a little of her frustrations. Though it pains her she slowly tries using her voice again to talk over the phone with welfare bureaucrats. The Canadian employment income (EI) waiting period is 28 days; and Canada has national health care, so there’s no waiting period for medical benefits. Ms. Webber’s doctor fills out the forms which should result in EI benefits starting in November, the second month after her diagnosis. The welfare income support is meager compared to her expenses. To receive Social Security Disability Income (SSDI) in the United States there’s a 5-month waiting period during which the individual must be disabled and a 24-month additional waiting period before one is eligible for disability Medicare benefits. Losing one’s voice is an eligible disability under SSDI and EI.

After two months she visits the ENT doctor to complain that a speech therapist hasn’t visited her yet. He tells her not to stress and now says “i don’t want to tell you it’s all in your head, but you know your body is affected by stress and i know it’s hard, but there’s not much i can do … but tell you to relax, do your best not to stress.” He finally brings Ms. Webber to a speech pathologist to help her live without speech and to find her voice again with exercises (e.g. gentle humming if it doesn’t hurt; sing in a straw) and to HYDRATE (e.g. breathing in steamed water). She should stay away from dehydrating drinks like coffee. Mentioned in passing is communicating with sign language, but it’s never pursued by Ms. Webber; probably because her friends would need to know sign language as well.

Ms. Webber provides a wonderful three page spread (146-148) of positive balloons about her silence (e.g. “it’s actually really nice, waiting while you write. it creates a nice pace of conversation …”) and her black/voiceless vs. orange/voice inked selves: both being calm or upset at often opposite moments. The speech pathologist wants her to ease into talking again and to stop if pain starts. Ms. Webber has her doubts. She gets further help from a voice teacher; especially to not be so hard on her own self. She moves forward and has setbacks. Her orange voice dominates toward the end of this graphic work.

The only issue I had with this work, and it may only be me, is the selection of the title. Is it an outdated word? The word “dumb” is fraught with negative connotations. According to grammarphobia.com which references John Ayota’s Dictionary of Origins “dumb” goes back to a pre-history word dheubh meaning confusion, stupefaction or dizziness; or Germanic sources: tumb or tump meaning “slow-wittedness” and “inability to speak;” while the English “dumb” word’s intelligence-related meaning began in the 1800s probably from the German dumm. These two meanings were from a bad misunderstanding by the onlooker that inability to speak is wrongly connected to low intelligence; one makes this same mistake for a foreign speaker. Does this double-meaning detract from this creative work? I hope not, because this book’s title clearly has only one meaning: inability to speak.

Most of the events in Dumb occurred in 2013. This graphic work provided Ms. Webber a creative outlet to show her important voice in another way. I met her at CAKE (Chicago Alternative Comic Expo.) in June 2018 when she was also able to speak aloud.