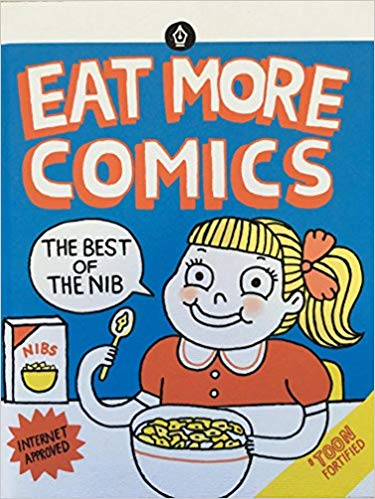 The Nib was nominated for several Ignatz awards at the September 2019 Small Press eXpo (SPX) in Baltimore, MD. The nominations were for Outstanding Anthology for their Death and Family issues (Edited by Matt Bors, Matt Lubchanksy and Eleri Harris), and for Outstanding Series (Matt Bors, editor-in-chief). The Nib won for Outstanding Series. At Cartoon Crossroads Columbus (CXC) on September 27, 2019, from a CXC press release, “Matt Bors received the Transformative Work Award. Bors arrived in Columbus this week seeking to drive attention to the financial reversal faced by the satirical magazine The Nib, which recently lost the majority of its funding by First Look Media. The [CXC] Festival cited Bors’ continued potential but also his track record in developing the magazine’s mix of short satirical pieces and long-form journalism, its ability to use syndicated cartoonists and brand-new talent[s].” These well-deserved awards confirm the outstanding work The Nib has been showing at their website (thenib.com) since 2013 and in a quarterly publication starting in 2019. The 2019 four issues revolved around a single theme: Death, Family, Empire, and Scams. Each issue is a mix of short graphic stories (fiction and non-fiction), and single or multi-panel cartoons by various artist/writers. This review covers the first collection of The Nib works which was published in 2015, a hard cover anthology called Eat More Comics: The Best of The Nib. In particular, this review will cover the medical oriented pieces; there are six such articles from 6-12 pages in length.

A Lost Possibility: Women on Miscarriage by Ryan Alexander-Tanner (ten pages) is presented as four women (Maggie, Theresa, Toni, and Wendy) who experienced miscarriages and Annie, a certified nurse midwife, who explains the medical information (e.g. “Miscarriage is a term used for a pregnancy that ends on its own, within the first 20 weeks from the first day of a woman’s last period.”). It’s realistically drawn in color. Each panel is one of the women telling her story; most pages have four panels with two-four women saying her concerns and outcomes (e.g. Wendy: “After my second miscarriage I found myself overwhelmed with feelings of rage. I realized they were about the culture of silence around miscarriage”). These stories break through that silence.

Bikram Addict: My Struggles with the man, the brand, the pain, and the sweat (six pages) by Eroyn Franklin on bipolor disorder and becoming a Bikram yoga (aka hot yoga) addict. “It’s always the same 26 postures. There was no OM session, no child’s pose, no downward dog.” The heat made the author more limber. The author found it helped her, but also discusses the dark side of this treatment: Choudhury “Bikram created a type of yoga that is extremely hard, militant, scorching, and he pushes people with abusive language—it sounds sadistic.”

I Want to Live: Robin Williams’ death helped me understand something. I don’t want to die. My depression isn’t going to win (six pages) by Erika Moen. National Suicide Prevention Lifeline phone number is 800-273-8255. The author explains, “My entire life I felt like I wasn’t supposed to exist.” The author didn’t want to take her life; “I just wanted to stop existing.” The day after Williams’ death, “I know that his friends and family are the ones in real pain,” but the author “hurts” and expects future ups and downs and hopefully closes “since yesterday, I don’t want to die.”

Vaccines Work: Here are the Facts (ten pages) by Naro Maki with humor, cartoony and realistic drawings, the author explains the history, mythical controversy, and importance of vaccines. Over several panels Maki shows the author of the debunked 1998 Lancet article that claimed that measles, mumps, rubella (MMR) correlates with autism: “However, after a lengthy investigation, it was discovered that the author, Andrew Wakefield, had not only fudged the data but also did a lot of other shady stuff;” like having many conflicts of interest “He was paid hundreds of thousands of pounds [English currency] by the UK Legal Aid Fund for his expert testimony in a class action suit against MMR manufactures … All of it undeclared.” The results have been large whooping cough and measles outbreaks from 2014 forward; though the actual adverse risk from MMR and other vaccines is minimal (perhaps 1/1,000,000 having serious effect)! This story is followed by Jen Sorenson’s four panel cartoon “Get Well Gifts for the Unvaccinated” including a kid’s estate planner to indicate “who gets your Legos, just in case.”

Sex Positive: Should keeping your HIV status a secret be a crime (twelve pages) by Sophie Yanow? provides history of a Quebec Canada criminal case of a man having unprotected sex (not using a condom) and not disclosing his HIV positive status before sex with fifteen people “though he had not transmitted HIV.” The article provides the history of AIDS, AIDS activism and treatments.

Urine: The Miracle Cure; Can drinking your pee solve all your problems (ten pages by Emi Gennis)? Given that the article has some people making big cure claims from drinking urine and no actual studies provided, I almost felt I shouldn’t mention this article from Eat More Comics. I would put it under pseudo-medicine and the placebo effect. I would never recommend this treatment. The cartoonist author got no results after drinking a little of her own urine out of curiosity.

I recommend reading any and all published issues of The Nib and Eat More Comics in particular.