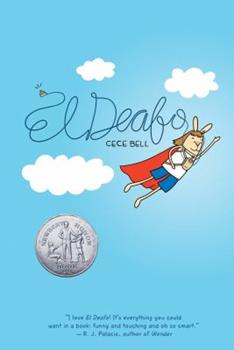 Even though Cece Bell illustrates her graphic memoir with humanoid rabbits in place of people, her struggle to come to terms with her meningitis-induced deafness and the visible difference of wearing a “phonic ear” is universal and touching.

Bell spends only one page detailing her life as a normal four-year-old before she is rushed to the hospital and diagnosed with meningitis, an inflammation of the membranes around the spinal cord and brain. If not treated within a few hours, it can lead to death. Those who recover often suffer from long-term effects such as stunted growth, brain damage and learning disabilities, or, as in Bell’s case, hearing loss. While she’s in the hospital, this sudden loss of hearing is wonderfully illustrated, with everyone’s speech written in lighter and lighter text until it fades away and disappears. But Bell doesn’t notice this change right away and is released from the hospital as if everything had returned to normal. A few days later, she loses sight of her mother and runs around the house calling for her, unable to hear her mother answering back. This is when they realize that Bell can no longer hear.

After visiting an audiologist, Bell is given a phonic ear to wear in a pouch around her neck with cords leading up to the hearing aids in her ears (no subtle in-ear devices here!). At first, her only concern is whether or not she looks good, and is happy with the cute polka-dot pouch her doctor gave her. She’s enrolled in kindergarten with other deaf kids, and learns how to adjust to her new normal. But when Bell’s family moves and she’s enrolled in a new school, with hearing kids, she’s immediately and constantly reminded of how different she is. Her classmates are always talking about what they’ve heard on the radio or seen on TV and make fun of her for mispronouncing or misunderstanding words.

The rest of the novel details her struggles in school and her search for a true friend, because “being different feels a lot like being alone” (page 46). While they might not ever have  a huge hearing aide strapped to their chest, every kid has felt different and alone at one time or another, and Bell’s cute but realistic story taps into those emotions. Readers, young and adult, will remember those feelings and sympathize with Bell, feeling her humiliations and triumphs. The success of this memoir is its relatability and the lesson that, even though people may look different, we’re all the same on the inside. Highly recommended.

Elna McIntosh is an assistant librarian from Colorado who loves all books, but especially graphic novels.