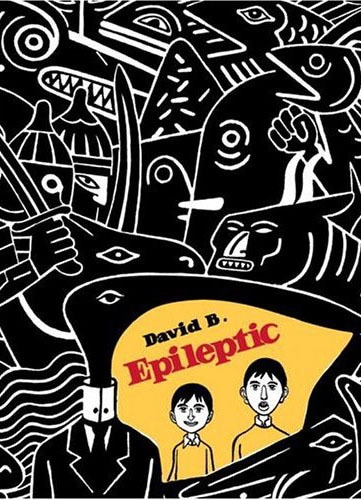 Epileptic is like no other Graphic Novel. A masterpiece in which the margins of reality, dreams and immagination are blurred. David B grew up with an elder brother, Jean-Christophe, who suffered from severe epilepsy. David (christened Pierre-Francois Beauchard, but changing his name  during the story) are very close as young children. Jean Christophe is a bright imaginative child with a talent for drawing that he shares with his brother. The book chronicles the development of Jean-Christophe’s illness, his reaction to it and the strains and confinement it puts on family life as they search in vain for a cure for his fits, trying both orthodox and unorthodox medicine. Jean Christophe is under the care of an arrogant neurosurgeon who wants to perform drastic surgery which will result in him losing his peripheral vision. JC becomes a “case”, an opportunity to perform brilliant surgery.  Neither JC nor his parents want to go ahead and they take him home. The professor’s team, outraged at their ingratitude, hurl abuse them. The family, following the macrobiotic teachings of various gurus, go to stay in a commune, but the commune members are prone to petty narcisism and  rampant egotism: forming factions, being dictatorial about diet and regimen and abusing people who dont fit into their model. The commune members are just as bigotted as anyone with regard to Jean-Christophe’s fits.

The family try every theraputic and spiritual avenue, but nothing works. kaballa, voodoo, rosecrucianism are all found wanting. David explores all these faiths but ultimately finds them full of misguided losers.  The family suffers under the pressure. David, anxious that he too will develop the disease that “stalks” him becomes immersed in his drawings, finding them far more rewarding than spiritualism. He feels emburdened as a guardian of, and in some way defined by, his sick brother. When Jean-Christophe has a fit in the street the police or firebrigade or ambulance are allways called and usually want to take charge; it is hard to wrestle him away from their “care”. The complex emotiions that surround his brothers illness and manipulative behaviour are discussed honestly: in one episode Pierre-Francois hopes that his brother will kill himself inadvertently while adding petrol to a bonfire. He half heartedly runs to tell his father, thinking that by the time he gets back Jean-Christophe will be dead. He isn’t. When JC has a fit, David often slaps and kicks him, under the pretence of trying to wake him up and later in the book he fantasizes about stabbing him to death. There is no happy ending, only a resolution of sorts: JC’s epilepsy and his illness behaviour become worse. He has decided that it suits him to be sick, letting him avoid adult responsibility. He becomes fat, bloated and  scarred from his many falls. The final pages contain David’s conclusions and acknowledgement of the complexity of his brothers illness.

If you have read or seen Persepolis, you might think that the artwork in epileptic is similar. That is because Marjane Satrapi was a student of, and influenced by, David B. she is now much better known, of course, than her former teacher. David’s artwork is dark and captivating monochrome. He draws polynesian or celtic-looking monsters and ghosts as visual metaphores for his brothers illness and his own tortured psyche. Episilepsy itself is depicted as a serpentine dragon that writhes through the scenes and through the characters bodies. When JC is having a fit he is seen fighting with the dragon, which is seen to stalk David in other panels.