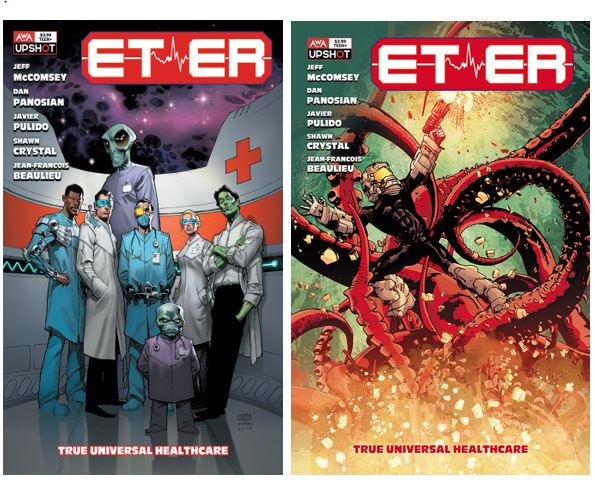 The two-story collection ET-ER—soon available in comic book shops October 13, 2021—by writer Jeff McComsey, artist Javier Pulido, and letterer Dezi Sienty, arrived on the webcomic scene right at the start of a global pandemic.  To many of us in March 2020, daily life seemed other-worldly.  It felt as if, somehow, we had woken up in a new galaxy, where spiky COVID spheres hummed through the foreign air.   This new world of empty streets, hospitals in crisis, and healthcare worker heroes faced all of us, in one way or another.  Access to healthcare took on a new urgency in the national and global conversations.

ET-ER entered this milieu asking the next obvious question:  what might “universal healthcare” really look like… in a sci-fi adventure universe full of interacting interplanetary species?  The answer comes in two ripping stories of heroic doctors, suffering patients, and delightful pop-culture echoes, all wrapped up in dynamic art, color, and letters.

The story opens with the slight, stoic, and courageous Dr. Chen moving without a beat from discussing the bowel movements of a chronically ill patient to disarming a hostage-taker with witty conversation.  She’s competent, compassionate, powerful despite her small stature, and funny; wears white shoes and too-big glasses, and I liked her right off the bat.  I liked her even more when, at the end of a double shift, she jumps in to help the victim of a car accident… an action that leads to adventures she never dreamed of.

The mysterious Dr. Mobray soon introduces Chen to the ET-ER (“Behold,” he says with satisfied flourish, “downstairs.”), an emergency room run by and for “extra-terrestrials.”  The beauty of the first story comes from her newbie immersion in this world, which brings us along in a way reminiscent of the wide-eyed Harry Potter entering Hogwarts for the first time.  Like so many stories, this one introduces the protagonist—and us—to a world of marvels that existed just a tiny bit outside of her own.  Witty dialogue lets readers know we are in the hands of a smart writer.  “Possible extinction-level events aside, I think you’re going to get a kick out of this part,” Mobray tells Chen at one point.

Adding to the kick I got out of this book, the art and color work collaborates with the script to create a fun and funny set of tales.  From an alien who greets his doctors with a Vulcan gesture familiar to all Star Trek fans, to a sharp-toothed cousin of the monster from Alien, the visual puns keep on coming, backed with bold, bright, high contrast shapes and colors.  There is nothing shy happening on these pages!

This is fictional high-adventure, so depictions of medical procedures aren’t detailed or technical. We see intergalactic ambulances speeding to the nearest ER (albeit through wormhole portals).  Patients arrive and are classified for level of treatment need.   One sequence involves an alien’s antibodies protecting the creature from invaders–the doctors trying to perform a galaxy-saving surgery!  The capsule endoscopy procedure makes an appearance to structure (loosely) a story plot.  These things are recognizable to a general audience and don’t try to offer medical realities.

I enjoyed spotting the echoes of chaos and commitment common to television medical dramas (especially the ground-breaking ER, 1994-2009), as well as famous science fiction tropes.   The stoic doctors reminded me of the heroes of Men in Black as well as Rod Serling’s narration in The Twilight Zone.  The hubbub of so many different intergalactic personalities going about their business echoed the cantina scene on Tatooine in the first-made Star Wars film, and the second story (episodes seven and eight) pays homage to the 1966 film, Fantastic Voyage.

Amidst this fun, the book has heart as well.  As Chen begs one intergalactic patient to help stop an apocalypse, he says he won’t help until she is nicer to him.  She pauses.  “Right,” she says.  “That’s the golden rule.  No matter where you are in the galaxy.”   This—and moments like it—ask us to think about our own healthcare models and what we hope for them.

As I concluded the book, I could almost hear Dr. “Bones” McCoy–perhaps the most famous intergalactic physician–crying out, “I’m a doctor, not a bricklayer” as he faced yet another unfamiliar alien being in need of universal healthcare.  I recommend this book for a fun and thought-provoking look at the strange and familiar in health care and what might just be possible.

Elizabeth Trembley is a storyteller, teacher, award-winning novelist, and comics maker currently working on a speculative memoir about trauma, storytelling, comics, and healing. She has coached writers for over thirty years. You can learn more about her creative work and her teaching at www.elizabethtrembley.com.