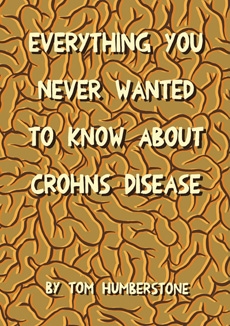 On first inspection one might think that this slim, 24 page comic was concieved as a self help booklet for sufferers of inflamatory bowel disease. The ironic title, however, might suggest otherwise. In fact, this is Tom Humberstone’s response to Scott McCloud’s ’24 hour Comics Challenge’ during which the artist must draw and construct a 24 page comic without prior preparation in one continuous day-long session.  Humberstone was evidently embarrassed by his condition, and the social problems it caused; he had a rough time of it as a child, missing much school because of the condition and suffering the indignities of interventional investigation, nasogastric feeding, self administered enemas and his mother quizzing the doctors about his future sex life. There is, however,  a well established rule within comics: if you have an embarrasing problem, make a comic out of it. Humberstone did, and a fine comic it made. I asked The author whether he found that making the comic had a cathartic effect:

“[Crohns] was ” he said “generally a subject I avoided talking about and would rarely, if ever, mention I had it. What was so interesting about producing the comic was that I felt I’d communicated what it was like to have Crohn’s quite successfully and when it was published on the internet for anyone to see, it felt incredibly liberating.
I stopped being so shy about mentioning it, and have become a lot more open about when I need toilet breaks or when I’m experiencing a particularly bad stomach pain. This, of course, has made my social and work life a lot easier as I don’t feel the need to hide my condition or cover up for it anymore. ”

Comics certainly seems to be the medium most suited to awkward confessional autobiography, spiced as it is with irony and dark humour. There is also a conspiritorial relationship set up between the author and the reader which feels very personal, and that seems to allow us into the most intimate aspects of the author’s life, constructing empathic bonds and enabling the reader to grasp the artists point of view. Tom says he actually feels better after producung the comic with less of the lethargy he used to suffer, that it somehow enabled him to ‘exorcise’ his ‘Crohn’s demons’

There seems little doubt to me that comics such as this will help others who have a similar condition. I asked Tom about the reaction he got when he put the comic online:

“[T]he traffic started going crazy.” he said, “I was getting 8,000 hits a day and steady streams of comments/emails/messages from people with Crohn’s or people who had friends or family with Crohn’s. I was overwhelmed by the response and genuinely touched that people were able to relate to it so strongly. ”

This doesn’t seem surprising to me. I think the power in a comic like this lies in it’s deeply personal narrative. There is no intention to preach,  teach or claim authority. It is simply a musing on how the illness affects the author, with acknowledgement that others have had it worse.  Comics like this should be gold dust to healthcare professionals, reminding us that ‘diseases’ are infinately variable and personal, rather than the abstract entities related by textbooks. It has been used on  a few websites dedicated to Crohn’s and Colitis but deserves wider recommendation by healthcare professionals.

Humberstone developed Inflamatory bowel disease at the age of 11. He portrays himself As a child, hamster-cheeked as a result of steroids. As we follow his progress through investigations to diagnosis he is sedated to undergo a colonoscopy but runs amok and gets a dressing down from the doctor (a cameo ‘played’, It seems to me, by Scott McCloud) for swearing at the nurses.  The condition is brought under better control as he gets older but there is no doubt of the havoc it wreaks on his daily life. The comic is funny, and self depreciatory, which renders the author’s appology for his ‘self-indulgent confessional’ unnecessary. Metafictional elements abound: we follow Tom through his 24 hour comic making marathon, his ‘avatar’ becoming more tired and sleepy-looking as time goes on.

He is an acomplished draughtsman: the artwork is all brush lines and inky washes, with hand lettering in what looks like technical pen. The constraints of the 24 hour challenge have lent it a spontanous, slightly raw, quality which is appealing.

The last printed copy of the book has just sold, but the good news is you can still access it for free on Tom Humberstone’s blog.

The comic continues to produce effects:

“The best thing about the reaction the comic has had is that even today I received an email from a friend in Toronto who knows someone who is about to be diagnosed with Crohn’s. So my friend thought of me, read my comic, and then sent the link on. If such a thing was possible when I was first diagnosed, it would have made everything so much easier and I’m touched that I might be able to help ease someone else’s experience – however subtle and slight that impact may be.”