Fights: One Boy’s Triumph over Violence by Joel Christian Gill is a book of lessons provided in a memoir. The lessons are there for the reader to find, because they’re the lessons Joel learns along his very difficult youthful path. I use Joel’s first name throughout this review, because the story mainly covers his childhood and supports familiarity and empathy. Joel’s honesty and very hard life bleeds through. Though fighting is a major theme, there are also tales of bullying, racism, domestic violence, overcoming sexual abuse, exploring the outdoors, fresh starts with a new persona and look, finding your own way, standing up for yourself, being brought up by a single mom, making and losing friends, and more for the reader to find for themselves. The artistry is amazing (both language and imagery), including the wonderful innovative graphic novel designs. I’ve seen some of the innovations elsewhere, just not in a books I’ve reviewed at graphicmedicine.org. The colorist, Shannon Scott, with Jade Rodriguez flatting the colors (e.g., making sure color separations line up) for Fights did a superb job. In the afterward, Joel writes, ”Elements of this book may be shocking to some people close to me because I have kept a lot of these details to myself, only sharing them with my wife and various therapists over the years. However, I did not write and draw this book as a cathartic exercise for myself. This book is for all those who feel trapped in similar circumstances.” (248) Though this book has darkness, since it’s mostly written from a child’s perspective the darkness isn’t hopelessness and ultimately this graphic work is a hopeful one of surviving and thriving. I highly recommend Fights.

Fights breaks away from many graphic novel standard practices in words, imagery and design. Though the book is “Suggested for Mature Readers” as indicated on the back cover, it has the feel and at first blush the content appears to be for grade or middle school kids. After all, it’s primarily about Joel’s childhood into his teen years. What makes it “mature” is language (lots of swearing, especially the kids who got it from adults), the topics (child sexual assault, domestic violence, racial intolerance, fighting, bullying, and illegal drug selling), and to a lesser extent the books design which supports experience reading graphic works. I give a table of some of the innovations that Fights has with more common graphic novel practices later.

The back of the book provides no domestic violence resources, so I provide a couple of United States ones here: National Domestic Violence Hotline (1-800-799-SAFE, 1-800-799-7233), Prevent Child Abuse America, and calling 911 if there’s immediate danger. Some of these sites suggest you clear your home device search history or search on a device outside the home, if you fear your web searches are being monitored.

Fights opens with current-day Joel driving and talking with his son; and his son tells him about a fight in school. After some back and forth, over three panels Joel thinks “Can he [his son] protect himself? Does he even know how to fight? What if he needs to …? … By his age I had been in hundreds of fights. … I have to teach him how to fight.” The body of Fights covers four important periods in Joel’s life from age five to early adulthood. Each chapter shows one or two characters confronting Joel—off panel—in some way. For example, chapter one title page shows a girl all in pink (clothes, flip-flops and unbraided hair in four pink-ribboned bundles) with a Band-Aid on her leg saying, “Imma fuck you up.” The color pink has a very negative connotation for the author. Pink colored word balloons are the author’s way of showing sexual abuse.

Joel provides his first remembrance around age four … being walked to “Bay-Bay’s” apartment where he’ll stay for a few days while his mom starts a new job after her release from jail. On the walk over he’s scared even before he’s confronted with death. Joel was a timid five-year-old kid with fights finding him initially and five years later he would make his own fights. Violence surrounds Joel, including sexual abuse against him by family members and adult friends of his mom. Joel doesn’t recall how he got ready for school each day; only that it somehow happened; his clothes laid out, had breakfast, got dressed, “wash up” in the sink, went to the bus stop. His parents weren’t around to help him get ready; his mom worked and his dad lived elsewhere and his siblings lived with their dads. Mostly Joel had to make his own way. At the bus stop he was ridiculed, shoved, and bullies demanded money though he had none. When he tells his mom, she demands he fight back or she will beat him. (45) He fights some racist white kids with an empty glass soda bottle and wins. He’s proud and tells his mom he fought off the boys who he doesn’t expect to bother him again; and his mom responded, “That’s good. … If you don’t learn to fight back they gonna walk all over you.” (54)

Joel’s dad dies when he’s five. By second grade, Joel already has a bad reputation. Just as he had been beaten up by bigger kids when he was little, he did the same when he was older in grammar school. Other kids learned to run away from him, causing him to be friendless. There are only two adults in Joel’s life that provide some support. One is his mother, though we never see her face, because Joel writes “Not showing my mother was about how I felt and remembered those moments. In those places it felt very disconnected and I wanted the reader to feel similarly disconnected.” His mother’s support was the basics of food, clothing and shelter, but she often wasn’t around, because she had to work, and Joel was left with violent or sexual predators. Adult male predators aren’t given a face either; for me that means the author doesn’t want to give them a specific identity because their facelessness makes them scarier and not worthy of humanity.

His teachers weren’t supportive, though even a hated teacher “taught me to love reading.” (67) The library and Joel’s fantasy/comic book drawing became his refuge. Even with drawing there’s ambivalence because his first drawing “teacher” was a family member who sexually abused him. And much later with a younger friend Joel learns “a beautiful fight” in chess. (136)

He moved several times before he became a teenager. Outside the home he would change his nickname, persona, hairstyle and dress. His tornadic hair coloration (see cover) occurred when he was 13, during his tough-guy phase when he spread the word about his rapping skills; his nickname then was O.K. then changed to K.O. at friends’ suggestion. Young love leads to Joel’s lesson that skin color shades and peer pressure can damage relationships … if you let it. After moving, Joel bonds with an amalgam friend (Rook) over giving each other high-top haircuts. Later teen years lead to very risky behavior with guns and jealousy.

I found one shortcoming in Fights and that’s the treatment of girls and women. The domestic violence is thankfully off panel. Female’s characterizations—except for Joel’s mom, Joel’s first bully, and his eventual spouse—has little depth beyond the “tee-heeing’ in grade school and sex in high school. This lack of depth is how Joel saw females when he was those ages. He narrates, “There were so many girls. It’s clear looking back that we were broken and sick in significant ways. We used girls as medicine.” (199) It would’ve been helpful if the author explained what that “medicine” was: solace, comfort, non-violent physical contact, fulfilling a need for connection, to hurt others like he had been hurt, …?

There are many innovations that I liked in the visual content of Fights. I thought a side-by-side comparison would be of value. Obviously, every graphic work is unique, so there is no absolute standard, but here are a few I’ve found in Fights and its more typical version. 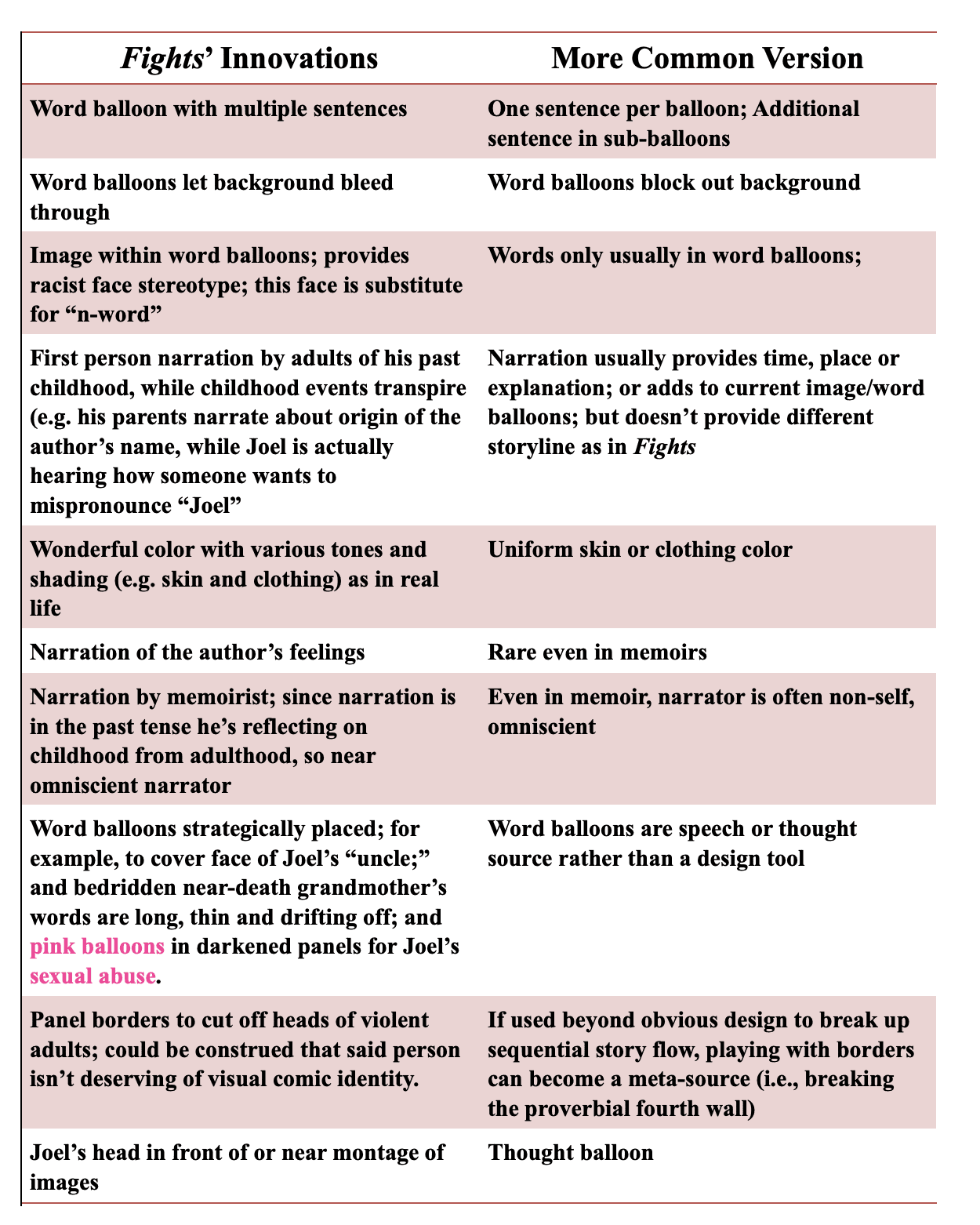 If the reader is interested in learning more about depictions of black people in comics, I suggest these two books: The Blacker the Ink: Constructions of Black Identity in Comics and Sequential Art by Professor Frances Gateward (ed., Rutgers University Press, 2015) or Black Images in the Comics: a Visual History by Fredrik Strömberg (Fantagraphics Books, 2003)

Medical aspects. Medical diagnosis or treatments plays a small role in Fights. There are some scenes that have medical implications. They include bullying, alcoholism, death, illicit drug use, domestic violence, and pedophile predation. Joel, as mentioned in the opening paragraph of this review, has therapy but we don’t see any therapeutic treatments. Instead, we see the reason for his therapy which is the struggles he endures in Fights and perhaps to a slight degree the therapy results in the delightful closing photographs. Joel’s grandmother is cared for by family members after her stroke. This led to Joel’s worst life events with his staying with predator relatives for an extended period, while his mom cared for her mom. During this time where Joel stayed there were also hoarded clothes that Joel calls “… this pile of neuroses …” (106) Joel’s mom goes back to school to study nursing.

Fights is an amazing graphic work. I highly recommend reading this story of a very difficult childhood, and following up by listening to one or more of the author’s talks about Fights or another of his graphic works to learn “where is he now?”

Joel has given many talks, including one I heard as part of the Graphic Medicine Confab called “Emotion & Style in Comics.” Other books by Joel Christian Gill include Strange Fruit: Uncelebrated Narratives from Black History (2014) & Strange Fruit 2: More Uncelebrated Narratives from Black History (2018), Bass Reeves: Tales of The Talented Tenth (2015), Bessie Stringfield: Tales of The Talented Tenth (2016), and Fast Enough: Bessie Stringfield’s First Ride (2019). He is currently an Associate Professor of Illustration at Massachusetts College of Art and Design.