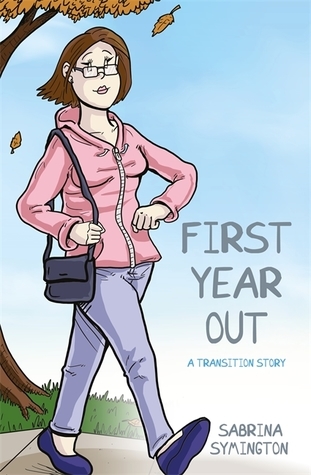 There are lots of hopeful lessons for transgender persons and those wanting to better understand them that can be learned from this graphic novel. I highly recommend this book for persons in high school and older; while younger mature persons can benefit, too.

Lily, the fictional lead character, was born with a male’s sexual organs but is actually a female and wants everyone else to understand and accept her real gender. The back cover indicates about the author, that “Sabrina Symington is an illustrator, graphic novelist, and blogger from Vancouver [Canada], working to normalize transgender issues. First Year Out[: A Transition Story] is based on her own personal experiences and those of her friends.” The medical issues relate to the transition process (hormone treatments, electrolysis, sex reassignment surgery, among others). The graphic novel is drawn with the rainbow of colors and color shading, distinctive characters and, except for some cityscapes, line drawings with little or no cross hatching. This tale shows how transgender people often are treated and provides insights on how they see themselves and want to be treated.

The story opens with Lily almost hiding under a baseball cap in a lilac colored hoodie. She’s wearing makeup with a light beard showing through. She enters a laser clinic for a facial treatment. She’s told to remove her makeup. We see the sounds from the treatment room “ZAP … ow … ZAP … ow.” She leaves the clinic with an orange color over the beard region of her face. She’s told to return in six weeks, and replies “You mean I have to keep walking around with a beard? It was hard enough just coming here like that! How many more treatments is this going to take?” Her face, surrounded by a calendar, show narration boxes on either side with words siphoned through her ears that say, “10 x treatments 6 x weeks bet[ween] + 3 days of growt[h].” The latter is the time for the hair to fall out after each treatment. She’s also told to not use makeup or shave for at least a day after each treatment. She leaves with a sensitive staff person’s words, “No matter what, people will judge you. The only advice I have is to try not to care too much about what other people think.” This advice applies throughout the graphic novel.

Lily’s relations with her parents are fraught. Her mother wants to understand, feeling she might be the cause of her being transgender or she thinks it’s just something in Lily’s head. She says, “if you have a penis you’re a boy. If you have a vagina, you’re a girl. That’s just nature.” Lily says it’s who she is; and this transition is her way of finally belonging. Over several encounters, her mother slowly accepts Lily for who she is and always was. Her father is another matter, and has trouble accepting “Darren” as his daughter, Lilly. There’s a flashback of a long-haired teenage Darren (Lilly) with his (her) dad being fitted for a suit. Dad says, “Every man needs to have a good suit. It’s like a right (sic) of passage. … And I know you’re interested in impressing the ladies. Am I right?” Darren-Lilly looks very uncomfortable throughout. Her dad wants a better relationship with his daughter by the end of the graphic novel, though it’s still unresolved.

The graphic novel includes a sexist prank in grade school, positive and negative encounters with men on the street, and dating before and after the sex reassignment surgery. (S)He’s bullied in grade school when (s)he plays with girls more than boys. There’s a funny encounter that’s relevant to recent political discussions related to bathroom usage. The encounter didn’t start out funny with Lilly being told by a presumed restaurant owner overseeing the entry of the bathroom. He tells Lilly, “We can’t have … your kind in with the ladies.” Off panel he hears, “Excuse me, but which washroom should I use?” The voice comes from a male cross-dresser (or possibly a she-to-he trans) and now the blocker is flummoxed. His response is to ask them to leave, while (s)he says “Really? You’re going to kick us out because you can’t make up your mind on which potty we should be allowed to use? [and more loudly while we see the open mouthed other customers in the restaurant] I wonder how all these people feel about that? Will they be kicked out, too, if you decide they don’t look how you think boys and girls are supposed to look?” He lets them use what they want and ironically adds, “Just stop making a scene.” Each of these events provides a teaching situation for the characters but more importantly for the reader.

She could only show her attraction to men more recently. A female friend questions this, “I don’t understand. You’ve had plenty of girlfriends in the time I’ve known you;” meaning that Lilly seemed to have been attracted to females. But Lilly responds, “That was different. The attraction I felt for women was always a mixture of envy…and inadequacy. I mostly wanted to BE those girls. And I think showering them with affection was a way for the woman in me to feel loved herself.” I don’t want to give away her dates with men, because there’re bad and good ones that the reader should see for themselves.

The medical treatments shown in some detail include the purpose of and process for hormone replacement therapy, training her voice to be more feminine (as she wants it), trans/non-binary/gender queer/two spirit support group discussions, and the sex reassignment surgery and its aftermath. These are simplified for the reader.