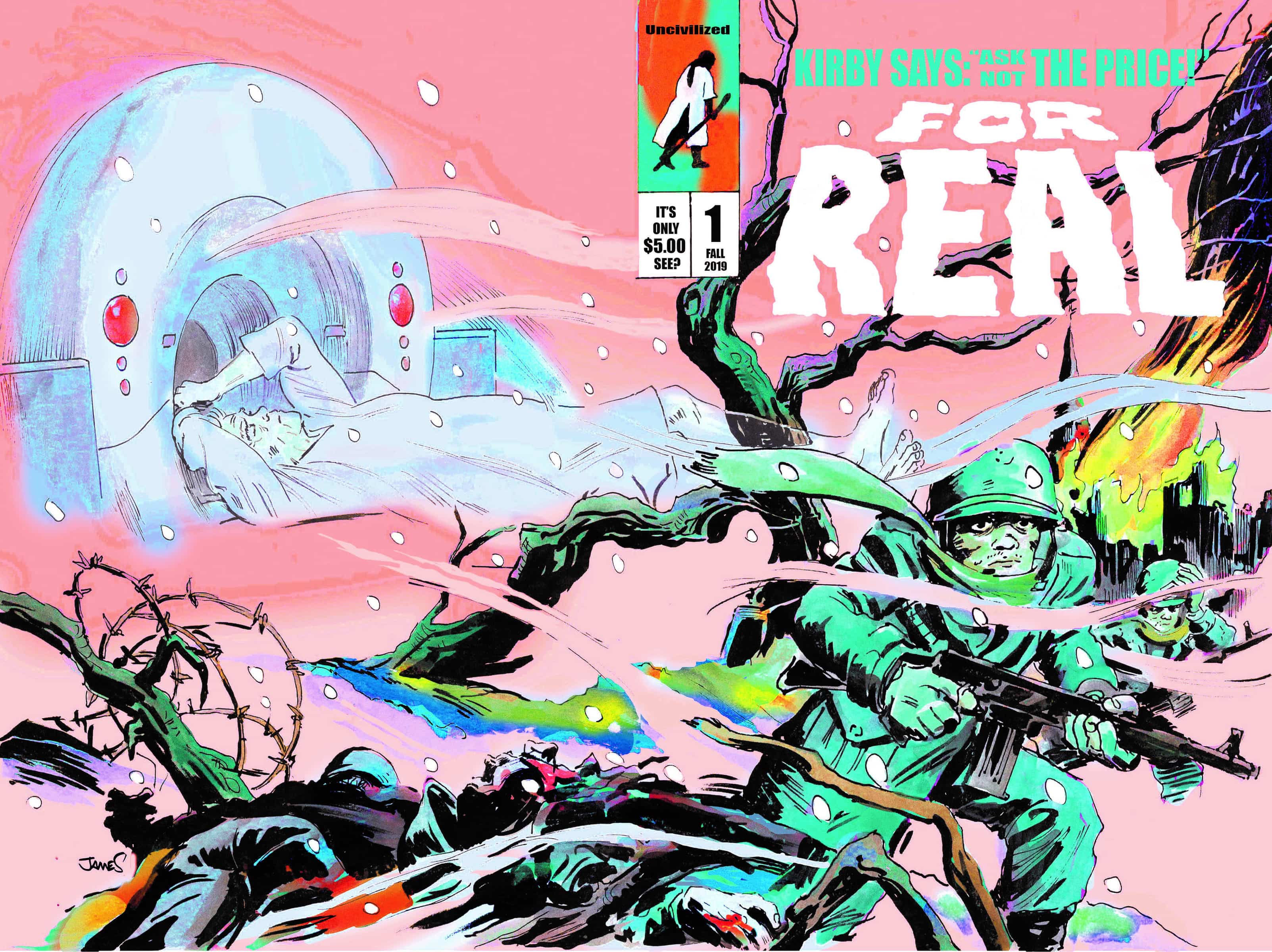 Review of For Real (Issue One): The Oven by James Romberger

Though I grew up reading comic books, I rarely read stand-alone comics today. I usually wait for a graphic novel to come out, which might be a multi-comic story arc. Comics are often sold as twenty or so page “pamphlets,” often with regular frequency. Some single stories in a single comic have achieved acclaim (e.g. The 8-page story Master Race by Al Feldstein writer and B. Krigstein artist in Impact issue 1, March 1955 EC Publications; about a holocaust survivor encountering a Nazi war criminal on a New York subway). I was asked to review the comic story The Oven by James Romberger and I’m glad I was. Romberger has created numerous graphic works, including being the artist for David Wojnarowicz’s AIDS memoir: Seven Miles A Second; and Marguerite Van Cook’s autobiography, The Late Child and Other Animals.

The Oven appears as the sole story in the first issue of a new series called For Real which began Fall 2019 published by Uncivilized Books. The series is edited by Romberger and will be published periodically with other writers/artists. Romberger indicated, “The main impetus is to use comics and text/art pieces to address real world issues. And also, to bring together the most talented people I know.” Romberger did the entire first issue, including the cover and a ten-page essay called The Real Thing providing background for the comic. Though the comic could be generally understood without the essay, the essay is very worthwhile to gain insights into Romberger’s thinking and background about the protagonist, Jack Kirby. Each comic in the series may vary in length and shape; the comic portion is 22 pages black white and grey fictionalized story based on real events. The Oven is the tale of famed cartoonist Jack Kirby going into a hospital for a CAT scan and having post-traumatic stress syndrome (PTSD) flashbacks during the scan. I highly recommend Issue 1 of For Real.

Kirby’s cartooning career is long and well explained in Romberger’s essay. The virtual, web-based Jack Kirby Museum and Research Center at kirbymuseum.org is another resource. If the reader wants more background about Kirby, then I suggest an excellent Kirby biography: Kirby: King of Comics (Abrams ComicArts © 2008, revised 2017) by comic writer and historian Mark Evanier, with amazing examples of Kirby’s work. Romberger provides additional sources at the end of his essay. According to Romberger, Kirby was in combat during WWII, including landing at Omaha Beach a couple months after Normandy, and helping liberate the German-run Soviet-soldier POW occupied camp near Metz; there were 22,000 Ukrainian victims buried there (dpcamps.org/metz.html). Romberger’s essay includes this Kirby quote, which is the source of the essay’s title (The Real Thing):

This guy took a direct hit while he was talking to me. He was from Brooklyn … so we had something in common. We were talking and the next thing you know, no sound, no nothing, like … you know, there you are on the fourth floor of another building, and you don’t know what the hell you’re doing there. This guy’s a red smear on the wall and you can’t get more undignified than that. Then you’re in the real thing. [emphasis added].

The essay goes on to explain that Roz, Kirby’s wife, indicated that Kirby was haunted by WWII events he experienced with sleepless nights, nightmares, and flashbacks; all are typical PTSD symptoms. Cancer is another medical concern shown in this comic. In Evanier’s biography of Kirby there’s a self-portrait comic drawing that shows Kirby surrounded by his super-hero creations and getting his cigar lit by the Human Torch (aka, Johnny Storm). There’s also a photograph of Kirby smoking a pipe. Kirby was diagnosed with and treated for throat cancer. Though debilitating, the treatments were successful and the cancer went into remission. Kirby later died in 1994 from heart failure.

PTSD, under many names, has a long history (e.g., see PTSD and Shell Shock (https://www.history.com/topics/inventions/history-of-ptsd-and-shell-shock) by History.com Editors updated August 21, 2018) going back to ancient times. PTSD is caused by a traumatic event, such as war combat, whose symptoms can manifest as recurring flashbacks, reliving the event, nightmares, and sleeplessness; and can show up with physical changes in the brain. Gilgamesh from 2100 BCE shows the protagonist having recurrent nightmares of another character’s death. War related names for PTSD have included Nostalgia, Irritable Heart, and Soldier’s Heart (1600s, 1700s, and US Civil War); Shell Shock (WWI); Battle Fatigue, Combat Fatigue, and Combat Stress Reaction (WWII); Post-Vietnam Syndrome (Vietnam conflict) and now PTSD.

The cover of this issue of For Real portends its contents with a helmeted soldier carrying a rifle in the foreground, dead bodies, bare trees and barbed wire nearby—a city burning in the distance; and above and to the left of the soldier a ghost-like image in the mist of an elderly man in patient garb entering a CAT scan.

The title, The Oven, of the story has several symbolic meanings. They might include being put through a CAT scan, the horror of the ovens in NAZI concentration camps, and the burning that comes with smoking and cancer radiation/chemotherapy treatments. There is also a flashback/PTSD scene with small ceramic ovens that American soldiers used to hide from Nazi soldiers; while Kirby is in the middle of the CAT scan. Breathing and not breathing is critical here whether hiding in the kilns or in the scanner following the technician’s instructions. The comic is inked in black and white with the PTSD flashbacks in gray, almost pencil-like drawings. The words in this comic appear sparsely; there are many wordless panels, especially during the flashbacks, leaving the reader to fill in the story. There are some war scenes with German soldiers speaking and translations at the bottom of the pages. Throughout the comic, Kirby’s genius comic reputation goes unrecognized by other characters and he is treated as just another patient getting a CAT scan. Kirby’s flashback PTSD manifests in Kirby as depression and anxiousness from Romberger’s excellent drawings of Kirby’s body language and facial expressions. There is no narration in this comic, but there are lots of sound effects (e.g. at one point, the sound of the CAT scan mimics that of a barrage of bombs during a beach landing).

The combination of comic and essay are very beneficial. Again, I highly recommend Romberger’s first issue of For Real. I’m looking forward to seeing how the series progresses.