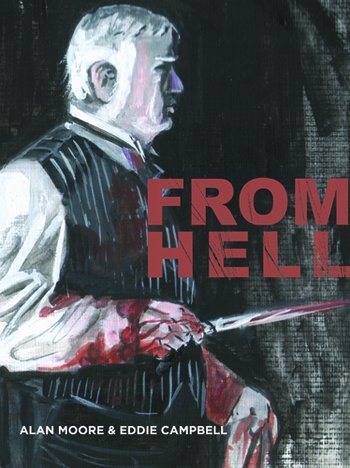 Thanks to Rajat Srivastava for recommending this. I had read other Moore classics, but not this one. Phew- where to start? this is a big, complex , monster of a work!

The main story is based on Stephen Knight’s Jack the Ripper: The Final Solution  (Grafton Books 1977) which suggests a conspiracy between the Masons, the royal family and the painter Walter Sickert, to cover up the ill advised, secret marriage of Prince Albert Victor to a working class shop girl by whom he had fathered an illegitimate child.  A group of whitechapel prostitutes have discovered the situation and are trying to blackmail Sickert, threatening to make the news public. Masonic officers of the police force are charged with rectifying the situation, and Royal Surgeon Sir William Gull is recruited by Queen Victoria to find a solution. He proceeds to murder the offending prostitutes in Masonic ritual style, with the aid of his venal coachman, Netley. Then, teetering on the brink of madness and fast becoming a liability, he is promptly dissappeared to the lunatic assylum, there to die under a false name. The plot follows the attempts of  Detective Inspector Frederick Abberline to discover the murderer and his motives. On the way we are taken on a tour of occult London by way of Hawksmoor architecture, often supposed to hold arcane secrets, and Egyptian artifacts such as Cleopatra’s Needle and the Britsh Museum mummy collection. The story features cameo appearances from just about every notable Victorian society figure you could think of, plus many notables from other ages- from Williams Blake to Myra Hindley. Moore weaves in his take on the world of magic and vents his spleen on the Masons, whom he clearly despises.

The main story is followed by 60-odd pages of appendices. First Moore annotates the story chapter by chapter, page by page, explaining his reasoning, choices sources and references. Then there follows a 24 page graphic novella- Dance of the gull catchers- which covers the historiography of ripper theories and ripperology, concluding that the hunt for the purpotrator is ultimately futile at this historical distance, that there are more pressing social concerns we are ignoring in the here and now.

Moore makes it very clear in the appendices that he chose to base the story on Knight’s book (widely dismissed as fantasy) for purely artistic reasons- It suited his purpose and made a good base on which to structure his version. He is very clear that he sees it as no more truthful than the myriad other theories.

Like many people, I am somewhat fascinated by Alan Moore (probably an apt term, seeing as he proclaims himself a warlock). His influence on the comics medium is vast. He looks so scary but always comes over in interviews as funny and down to earth and so… well, moral and ethical. His views on magic and the occult seem to me to be remarkably similar to those expressed by some leading academic theologians (that these things are tools people use to change the way they think and empower themselves, that it is mostly in ones head).

For me, From Hell chiefly raises questions about power. The power and standing of the medical profession and the nature of that standing in Victorian times compared to today. The power in systems of control and governance and the dangers of corruption, greed and hidden self interest within those systems. The power of wealth and standing over those who have nothing. The power of religion over the masses and the parapsychology harnessed by practitioners of the occult. The power that paternalistic societies have had over women.  The power of the aristocracy- stemming chiefly from wealth, nepotism  and gangsterism but dressed up as divine.  These questions, as I’m sure Foucault would assert, are of direct relevance to healthcare professionals, and should make us think of the power, prejudices and assumptions that go unquestioned every day in our own workplaces.

Moore has studied the psychology of murderers and serial killers and done his best to illustrate the states of mind that drive their actions, and the psychological results of those actions. The book also raises questions about our fascination with celebrity, murder and sin and the way we overlook the bleak social realities that underly the actions of others, just as the Victorians preferred to blame a wave of female nymphomania for the level of prostitution, rather than poverty.