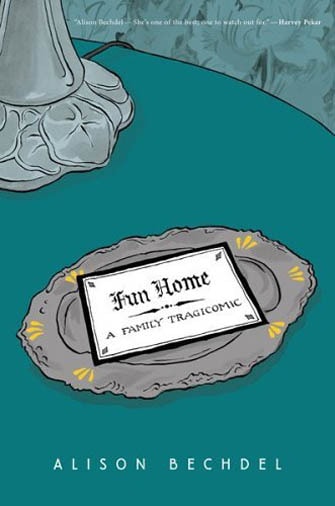 Alison Bechdel’s Fun Home: A Family Tragicomic (2006) chronicles the events of Bechdel’s childhood in the early 1970’s and her entry into adulthood and homosexuality at university. Her father was a repressed, unhappy aesthete, trapped in family life in his home town in rural Pennsylvania, running the family funeral home and teaching at the local school to make ends meet. He was a closet gay who had affairs with young men an ended up in court for plying teenage boys with alcohol. His death, most probably a suicide, haunts the book, an “extended meditation on history, memory, identity and trauma” (Gardner 2008:1). The narrative sets Bechdel’s troubled childhood against the historical events of the day and contrasts her own sexual awakenings, realisation of her father’s inner torment and the loss of national innocence produced by Watergate and the war in Vietnam. She suffered with OCD which came on at age ten. She graphically records the obsessions with counting and truth, the  invisible harmful energies that threaten to harm her family and the constant mental effort required to monitor and comply with her compulsions. the diary she keeps becomes the source of unbearable anxiety as she is wracked with dissonance over whether each entry is factually true. The work is a lucid account of the tangled mental web the OCD sufferer must negotiate.

Fun home has recieved much critical acclaim, as well as attention from scholars of literature and narrative. It is a complex, multitextual, metafictional autobiography, comparable in many ways to Maus and Binky Brown. Gillian Whitlock  has coined the term autographics to “draw attention to the specific conjunctions of visual and verbal text in the genre of [comics] autobiography.” (2006:966) of which this is an excellent example.