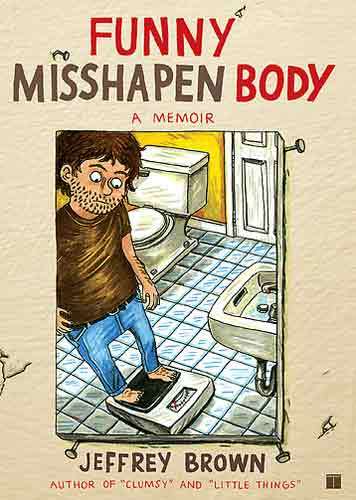 Funny Misshapen Body is not a ‘graphic pathography’, it is about Jeffrey Brown’s development as a cartoonist. One chapter of this memoir, however, deals with his diagnosis of Crohn’s disease.

His digestive system has been playing up for some time when he suddenly develops severe abdominal pains, requiring admission to hospital. His diagnosis means that he will never be able to get his own health insurance. A regime of medication is initiated, resulting in weight gain and acne. His disease does not abate and he still suffers stinking flatulence, and occasional incontinence. Surgery is scheduled and Brown records his hospitalization in detail, the lack of privacy, his friends from church turning up while he is on the commode behind a curtain, his caring attention to his elderly, confused roommate.

There is something very charming about Brown’s naive graphics and candour: picturing himself watching a film with his family while he is ill and falling asleep with his head on his mother’s lap; the way he misses his cat Misty when he’s in hospital. Lesser authors might have deemed these details too uncool to include, but they somehow disarm the reader, giving a sense of intimate knowledge as if one knows author like a close friend or family member. Comics are especially powerful in this respect, lending a fly on the wall realism mediated through the seductive filter of expressionist graphics.