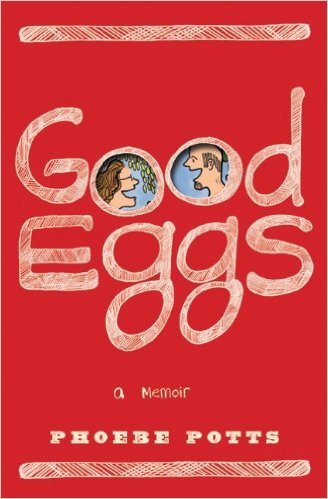 Good Eggs narrates Phoebe Potts’ work to conceive in her mid-thirties, after years of expecting that she could become pregnant “the natural way.” “Each month I get my hopes up,” she writes, alongside an image of herself sitting on the toilet and reaching for a tampon. “Each month I count nine months out to see when I might have a baby. And each month, despite charting and timing & peeing & trying – I’m still not pregnant” (xiv). Good Eggs joins Paula Knight’s comic Spooky Womb, Emily Steinberg’s graphic memoir Broken Eggs. and many prose memoirs in interrupting the silence around struggles with fertility.

The memoir’s preface establishes Potts’ hope to start a family, and also the “classic case of middle-class entitlement” that led her to believe she would have a baby when she wanted one (xvi). Like other alternative comics, Good Eggs is self-referential, confessional, and intimate. Potts wryly recounts the cultural narratives about pregnancy and infertility that she internalized from her Jewish family and reflects on the attitudes she encounters in her affluent Boston suburb. She situates her own journey through fertility treatments in this critique. I found Potts’ form of self-searching compelling; her willingness to examine her entitlement risks more than does exposing her body. Potts also tells her story with a sense of the absurd that avoids false cheerfulness. Instances of her understated humor include a counselor at the fertility clinic who says “Hope I never see you again!” (92), and her husband Jeff’s smugness at being told his semen sample was “perfect” (102). After an egg harvest she tells Jeff, “I laid eggs like a goddamn salmon!” (170)

In an interview with Radio Boston Potts describes the process of creating Good Eggs as a way of gaining “a handle” on these experiences and her ultimate decision not to continue trying for a pregnancy. After an early miscarriage, and because of her “advanced maternal age,” Potts’ OB advises her to consult a fertility clinic. She narrates the day-to-day chores involved in trying to conceive—nightly hormone injections, cycles of IVF, and PGD—and repeated phone calls delivering negative pregnancy test results. Guilt follows her belief that she can have a baby if she works hard for it: “Did I drink enough water? Have enough sex? Too much sex? Get enough sleep? Drink too many lattes? Exercise? Exercise too much?” (xiv). At the memoir’s conclusion, Phoebe and Jeff decide to end fertility treatments. Invoking her “Hebrew ancestors,” she compares their journey to the Israelites wandering in the desert for forty years. During this time, she writes, “they established rules for getting along. They produced the next generation. They suffered and they celebrated. And they accumulated material for stories” (247). Images of Phoebe at her drawing table accompany this narration, and the penultimate panel shows her embracing Jeff, affirming the solidity of their relationship despite their unexplained inability to conceive.

The panel organization gives the story a deliberate, reflective pace, and primarily uses conversations to develop the relationships around which the memoir revolves. Potts’ black-and-white drawings in these sequences depict the expressions and postures of characters, and emphasize Phoebe’s physical closeness with Jeff and her parents. She punctuates this visual rhythm with full-page scenes of more chaotic settings and conversations, such as those among family members at her mother’s “Jewish Christmas.” These full-page scenes or two-page spreads explore the background against which Phoebe’s individual narrative plays out. Potts illustrates the mothers and children surrounding Phoebe in a coffee shop (xv); a room where the female relatives she calls “the Motherland” have gathered (29); and figures including a “laptop & blackberry toting wonder women,” “driven jogger,” “doting gay men & their plucky surrogate,” and Ultra Orthodox Jewish couple in a waiting room (98-99). This image acknowledges that hers is not the only story of longing and loss, and points to the number of couples who seek fertility counseling and treatment.

I was particularly interested in the way Potts situates her fertility journey not only within her liberal Northeast environment, but parallel to her ongoing treatment for depression and her struggle to establish a rewarding career. In flashbacks to earlier periods in her life, Potts narrates her treatment for depression in her twenties. She recalls comparing herself to Van Gogh and wondering about the connection between mood disorders and creativity, musings that Ellen Forney echoes in her graphic memoir Marbles (2012). Good Eggs feels different than other self-searching comics because it is not concerned with perennial targets of confession like sexual deviancy, immorality, and obscene behavior. Potts is not conspicuously countercultural. However, she sets out to expose the manifestations of “middle-class entitlement” in her life, and understand how her expectations for her career, family, and moods reinforce one another. I read Phoebe’s frustration with childlessness as also connected to her lifelong habit of defining herself in relation to other people. Her narrative arc of coming to terms with infertility, then, is bound up with her equally tender narrative of finding autonomy and self-definition.