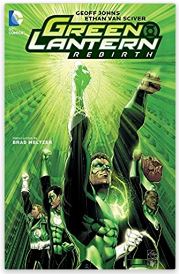 Superhero comic books are exaggerated soap operas. The characters are all larger than life, wearing colorful spandex, with universe-ending problems. However, we feel drawn to them because, in their overly dramatic way, they reflect our reality. This is true in Green Lantern: Rebirth, a sort of reboot/continuation of the character Hal Jordan and the Lantern Corps.

Rebirth is a great book about rectifying mistakes, dealing with PTSD, managing grief, overcoming anxiety and fear, and accepting oneself. A common thread in the book is how Hal Jordan deals with the trauma of death. First when he witnessed his father’s demise at a very young age. His father, like Hal became, was an airplane test pilot and, unlike Hal, died in fiery crash during a test gone wrong. Additionally, before this book during the 1990’s run of Green Lantern Hal also saw the destruction of his hometown, Coast City, with the death of countless family and friends. These incredibly traumatic events caused Hal to give into fear and despair. Eventually he became a villain, Parallax, who was unable to deal with the terrible events, destroys the Green Lantern Corps, and eventually dies in issue four of the crossover miniseries The Final Night, printed in 1996.

In Rebirth Hal is, unsurprisingly, reborn. It is found that Parallax wasn’t Hal himself but the literal cosmic embodiment of fear who had been living inside Hal like a parasite, influencing his actions and causing despair. Parallax and Hal fight for control as Hal struggles to find the strength to redeem himself. With the help of friends and a support group Hal finds the willpower to manage his fears and overcome Parallax.

This book is helpful, in its exaggerated and over-the-top superhero style, for those struggling with trauma and anxiety in their own lives. At times many feel controlled by fear within themselves. It is doubtful that any have made the dramatic mistakes Hal made in the 1990’s, but certainly some may feel they have alienated friends and family through poor choices of their own. This book is about overcoming all those past regrets, being honest with oneself about trauma, and gaining support from without and within.

It is worth noting that not everyone trusts Hal on his path to redemption. Batman, a character who uses and knows the power of fear himself, warns everyone that Hal’s intentions are false, and he cannot and will not change. Hal proves Batman wrong and realizes that, on this journey, he doesn’t need Batman’s approval or acceptance; Hal only needs self-acceptance. The way the artist draws Batman is interesting. While other characters are shown in light, Batman is usually shown as a foreboding black shadow. His cape splays out with tendrils on the ground and his shoulders even have curved spikes. It isn’t until Hal confronts Batman and realizes Hal doesn’t need Batman’s approval or acceptance that Batman is drawn more human again, having lost his shadowy and dark power over Hal.

This book is a wonderful allegory of overcoming trauma and anxieties. While no one will ever shoot energy-constructs at living manifestations of their anxieties, one can learn from this superhero allegory to accept oneself, deal with personal trauma, and overcome real and personal anxiety.

M.T. Bennett is a student at Trinity School of Medicine. He enjoys writing and spending time with his wife and two sons. Bennett is the author of “Dark and Bright: Poetry and Prose.” His poetry and articles have appeared in Intuition, Chiasm, Poet’s Choice, HEAL, America Media, and KevinMD. Twitter handle: @BennettEmpty