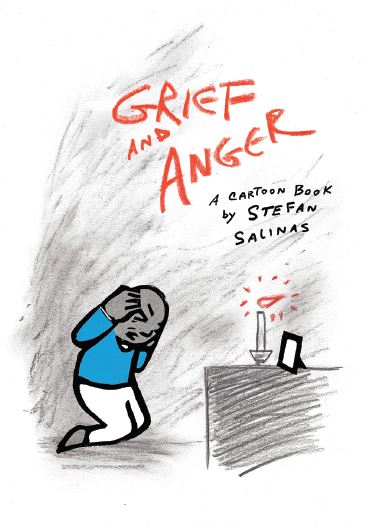 With a title that speaks to precisely what is discussed within, Grief and Anger by Stefan Salinas is a patient, compassionate, and non-judgmental exploration of several of the ways one of the least socially acceptable expressions of one’s grief in our culture—anger—is found and acted upon within sorrow. While the graphic work has no particular focus on medicine, the medical system and the myriad of caregivers that work within it are addressed in terms of being among those who might be lashed out at and speaks to their genuine desire to be of help.

Grief and Anger is not a specific story; instead, we are encouraged to see ourselves within the many unnamed characters as they navigate different situations. There is discussion of a relationship with the divine and many faiths are represented. Hope is made room for, but with no push towards trying to change one’s feelings to be more positive or the idea of attempting to fix or solve anything. Despair does not mean being broken. The only true encouragement is towards kindness and honesty to the self and others and the acceptance of one’s own feelings, no matter what they are from day to day or moment to moment. What it says, it practices. Rather than finishing on an uplift, the last words we are left with are “Today I cry.”, something unique in a culture which so often heavily prioritizes looking up and moving forward. Here there is permission given to be still and hold space for one’s moments of sorrow.

The artistic style is simple, but thoughtful: bold-lined grievers in a world of smudged and scribbled pencil gives the sense of those characters and their feelings being in sharp relief whilst the rest of the world feels unreal, unfinished, foggy, a thing apart, which speaks to the experience of grieving. The lettering is hand done, down to the page numbers, which aids in creating a feeling of being spoken to personally by the author.

The writing is unadorned and clear in a way one might initially think more appropriate for helping children to come to a place of better understanding but, while it is certainly accessible to children and I would recommend it as a wonderful tool for starting conversations with them on the subject, that is not the full extent of its audience. Anyone struggling with allowing their grief to contain anger or coming to a better understanding of the anger in another’s grief will find truth in its pages if they allow themselves to. In fact, shortly after reading Grief and Anger for the first time I myself had occasion to think back on it and found that in my own grief, my own anger, the simplicity rang true. Sometimes, when we are in the midst of hurting, being spoken to and connected with this way is far more effective than any erudite text could hope to be.

Jasmin Tomlins is a writer and theatrical professional on both sides of the curtain who studied to become a death and mourning doula. While she does not currently practice as such outside her own close community, holding space for the many facets of grief is still a deep interest of hers, evidenced by having run for four years a monthly book club exploring the subject along with other aspects of mortality.