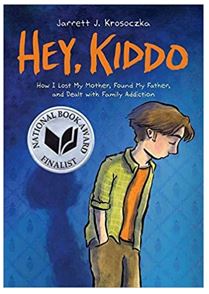 Hey, Kiddo: How I Lost My Mother, Found My Father, and Dealt with Family Addiction depicts the childhood of comic artist Jarret J. Krosoczka while his family was managing his mother’s dependence on drugs.

Krosoczka’s loose and effortless art style pairs perfectly with the ink brush. Characters are center stage because backgrounds are uncomplicated and ink washes. Each character design is simple yet distinct, allowing for maximum expression and emotions. An example of the style aiding emotions is on page 133, when Krosoczka’s grandfather, Joe, finally explains to him about his mother’s drug dependence. The panel (although the comic is lineless) zoomed in on Joe’s face, rendered more realistically to emphasize the weight of the words. The ink washes, usually gray or sepia, subtly shifted to red to help Joe stand out further from the background.

Collaged letters from Krosoczka’s mother, Krosoczka’s drawings, and other personal childhood mementos expand the world further and personalize the story. At times, it feels voyeuristic reading the letters. Looking at the drawings it is easier to picture the exact teenager we are following.

Krosoczka’s friend, Pat, is a grounding figure who continues to remind us that Krosoczka is a child during all of this. The two play video games together or carry out classic childhood shenanigans such as videotaping nonsense and wrestling. By depicting these moments, Krosoczka creates a comedic break.

Despite all of this, the earlier pages may be daunting to get through. Krosoczka focuses on explaining the family background up front and abandoning his own timeline. Many hard-hitting scenes pass by during this chapter, all well-executed, but without having had time with these characters before, the emotional impact does not land completely. For example, on page 37, Krosoczka’s grandmother Shirley finds out about his mother, Leslie’s, unexpected pregnancy with Krosoczka.  Shirley screams, depicted in red-colored slurs, which are so visceral they divide the page horizontally, bombarding Leslie. This moment is powerfully depicted but would have more of an impact on the reader had they better understood the complexity of Shirley, Leslie, and their relationship. A solution would have been to weave this essential information into Krosoczka’s timeline, giving the history a perspective on how it was impacting each character.

However, none of these critiques detract from the importance of a novel such as Hey, Kiddo. The book provides a look into the life of a child deprived of a parental figure due to drug dependence. When I first read the book, I remember thinking how harshly Krosoczka’s mother, Leslie, came off before recognizing the hints Jarrett had left. The reader only reads the perspective of Krosoczka as a child — a child who knows that his mom is not there.

The “hints” Jarrett leaves is the complexity of Leslie and Shirley’s relationship, Leslie’s letters, the acknowledgment (always read acknowledgments!), and how Leslie acts, which is often loving, if not troubled. Krosoczka depicts the history of drug dependence in his family, including Shirley’s alcoholism, and the trauma that laid the foundation for his mother’s dependence.

For example, Kroscovzka is told by this messaging that because his parent does drugs, he will as well. This messaging ignores the environmental factors of dependence, summing it up to the will versus a complex public health concern and illness. It ignores the humanity of everyone involved in the life of people who live with dependence – the entire point of the memoir.

A bittersweet memoir, Hey Kiddo will reward you at the end, especially if you read the acknowledgements.

Kaitlin Weed is an SAIC Alumni of 2020. Their work focuses on disability, healthcare, and rural life. Currently, their work is focusing on a graphic memoir, Beer, Water, and Honey.