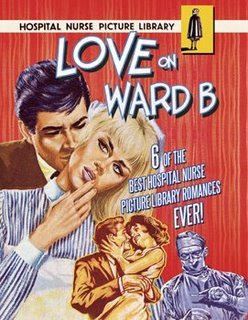 pEarlier this year Prion books brought out “Love on Ward B”, a compendium of “6 of the best Hospital Nurse Picture Library romances ever!” edited by Melissa Hyland. The original comic books, published in the 60s were presumably aimed to provide romantic titillation to girls and young women. It would be difficult to argue that they are great literature, the reason for republishing as a collection might be purely nostalgia based, to provide a gimmicky present for nurses or old fans of emergency ward 10. In their time, however, as Hyland points out, such comics will have had a small but definite role in shaping the nations conception of what it was to be a nurse (or doctor) and what might be expected if one worked in a hospital and so may well have influenced some to join the medical or nursing professions.

Interesting only as a cultural artifact of the time, a feminist deconstruction would be interesting!