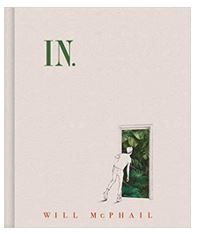 The Edinburgh, Scotland-based New Yorker cartoonist, Will McPhail, is not the first to wonder what our psychic life would look like if we could draw it, but he does something quite special with the idea in IN.  His narrator/protagonist, Nick Ross, is an artist who spends a lot of time in hipster coffee places and suffers from an inability to establish authentic connections with others; it all feels like performance to him.   The witty portrayal of his muted black and white existence explodes into color when a superficial exchange with the plumber fixing his toilet evolves into a moment of shared feelings. This fleeting human connection sends Nick into a state of elation that carries him (metaphorically) to a richly colored mountain landscape—a sustained visual revery that takes the reader along with him.  Such powerful psychic adventures occur in the text at moments when Nick connects with others or when life becomes all too real for him, as when he learns that his mother has stage-four pancreatic cancer.  This news initiates the most mysterious of color-sequences, as Nick approaches what appears to be a Temple of Medicine floating in a dark sea at night—an edifice that will fall into ruin later in the text.  The images here appear to merge Nick’s own fears about medicine with his mother’s.  As he enters the Temple, he is dwarfed by enormous doors and hallways.  A series of panels evokes paintings of Nineteenth-Century surgical theatres, except that the medical students among whom Nick sits, are all women—with whom he can find no means of connection.  The women appear to be laughing while observing the castration of a cadaver—who could be Nick.  Following the castration procedure, a doctor, as if raising a new-born baby, presents a jar containing the penis floating in formaldehyde.  The Temple of Medicine is indeed a fearful place.

Along with Nick’s mother’s cancer, an oncologist has a significant role in the story. A woman Nick meets in a bar and likes a lot turns out to be a cancer doctor, and he will lean on her to “make her [his mother] better”.  Her explanation that “I can’t always do something” initiates another powerful sequence of uncanny, nightmarish color images.  But the novel is not so much about illness or grief; it’s about achieving human connection—and rendering (in images) what that feels like.  The round-eyed look of panic or stunned amazement that is a signature feature of McPhail’s characters is transcended in such moments, replaced by intersubjective meeting, being drawn into a fully human world—getting “IN.”  And the text celebrates the enormity of the worlds within each of us.

This would be a useful text for medical students or students in medical humanities, not—again—for its medical content, but for exploring the feelings that accompany good and bad interactions, and for interpreting the images that represent the unaccountable and unseen subjective responses people have to one another.

Will McPhail has won the Gag Cartoonist Reuben Award.

Maura Spiegel teaches literature and film at Columbia University and Barnard College. She is Co-Director of the Division of Narrative Medicine in the Department of Medical Humanities and Ethics at Columbia Vagelos College of Physicians and Surgeons, where she teaches a film class to first-year medical students.  She recently published a biography of movie director Sidney Lumet (St. Martin’s Press).