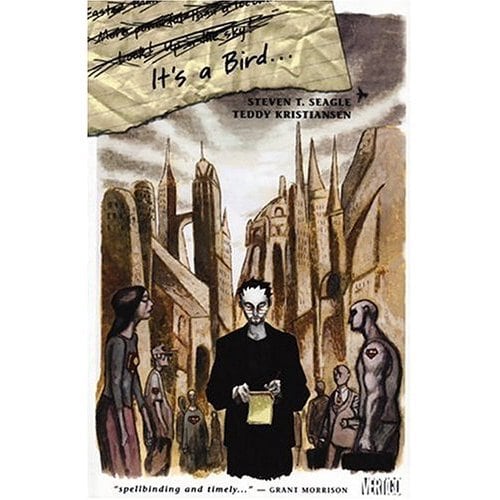 Steve is a comic book writer who doesn’t like comics. He’s a bit of a grump and his life is not going well. His father has disappeared and his relationship with his partner Lisa is strained. He’s just been offered one of the most sought after jobs in the industry- the chance to write Superman but he’s thinking of turning it down.

Steve’s family have a secret. His maternal grandmother died of Huntingdons Disease, a genetic movement disorder that comes on in middle age and is fatal after years of slow deterioration. There is no cure for it and it has dreadful implications for future generations- the disease generally emerges after sufferers have had children, if they have chosen to do so. It is not, as Seagle says, “a glamour disease”, no celebrities have died from it.

As in Epileptic, the disease haunts the author, who constantly looks for signs that he is developing symtoms. There is shame attatched to it. His mother seeks to cover up this stain on the family, his father (who turns up, having secretly been nursing his sister who has developed Huntingdons) wants to escape and live in a fantasy world.  Steve falls into depression and Lisa leaves him. A resolution, of sorts, begins when Steve meets an old college friend who has written a play about Huntingdon’s. It turns out this friends uncle had the disease and the play was written as a way of confronting his genetic heritage.

The Superman strand of the story cleverly weaves in an exploration of invulnerability, humanity, immigration and the sociohstorical context of the original superman series. It is superb. Steve doesn’t like Superman because he finds the whole premise illogical. He ends up punching Joe Allen, the retiring writer after Joe tries to explain the deeper significance of the character at the time he was invented.

Things do resolve and the book has a hopeful ending. The artwork, by Teddy Kristiansen, is wonderful, and unusual for a graphic novel: in full colour and mostly rendered in watercolour. I love it. I would highly recommend this book.