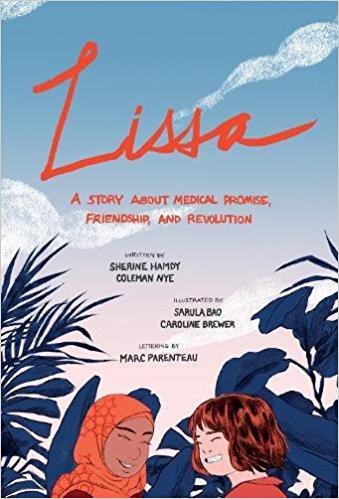 Helpfully, Professor George Marcus of University of California, Irvine explains in its Foreword that Lissa: A Story about Medical Promise, Friendship, and Revolutionis a daring instance of public anthropology, a graphic novel ethnography that “tests its ideas, arguments, and findings as vernacular storytelling across cultures” (14). Its authors, Sherine Hamdy and Coleman Nye, in tandem attempt to interweave their areas of research – “how social contexts shape medical decisions in very different sites – Coleman in the US, [Hamdy] in Egypt – and on very different issues – Coleman on genetic risk for cancer and [Hamdy] on kidney failure and organ transplantation” (264) – even as they work to translate it through the art of Sarula Bao, Caroline Brewer, and Marc Parentaeu. The Brown University and Rhode Island School of Design (RISD) collaboration becomes a beautiful chimera in the sense that Lissa is a truly hybrid thing, in content and in form, not a fantasy. That synthesis of scholars, artists, and pioneers is Lissa, the first of University of Toronto Press’s ethnoGraphic line. Marcus provides a functional umbrella category for a work that is just as much about (post-)colonial power, the Arab Spring, women’s education, body perception, women’s rights, familial relationships, technology, guerilla art, radicalism, cancer narratives, loss, mourning, and hope. Lissa is all those things – and, true to the title’s translation from Arabic, there’s still time for it to be even more.

As young girls in Cairo, Anna and Layla strike up an unlikely friendship that crosses class, cultural, and religious divides. Their relationship emerges despite the imbalance bewteen Layla’s native working-class family serving Anna’s oil executive American father; their bond becomes enduring as Anna’s mother is diagnosed with, battles against, and succumbs to breast cancer. Five years and thousands of miles later, Anna learns that she, too, may carry the hereditary cancer gene responsible for her mother’s death. Meanwhile, Layla’s family back in Egypt is faced with a difficult decision about kidney transplantation for her ailing father who, due to his faith, strongly opposes such a procedure. Yet, Layla’s hard-won education as a young doctor places her at a distance from her parents’ traditional views as well as Anna’s own medical preferences. Their rapport is put to the test when these health crises reveal stark differences in their perspectives…until the revolutionary unrest of the Arab Spring changes all their lives forever.

The value of Lissa extends beyond its bringing anthropological research to life in comic form. Unquestionably, it artfully combines scholarly insights and accessible, visually-rich (and subtlycunning) storytelling to foster greater understanding of global politics, inequalities, and solidarity. And, to boot, it features two fully realized female characters not only passing the Bechdel Test with flying colors but proving more real than even some memoirs’ protagonists.

No, Lissa’s greatest accomplishment is its opening up a landscape that is rich for development; Hamdy, Nye, Bao, Brewer, and Parentaeu demonstrate just how much can be blended together – not into a mishmash but, instead, into a coherent, compelling work – and how universal the human experience can be. Lissa should not only be read as the first in University of Toronto’s new series but, more importantly, as the beginning of things to come.