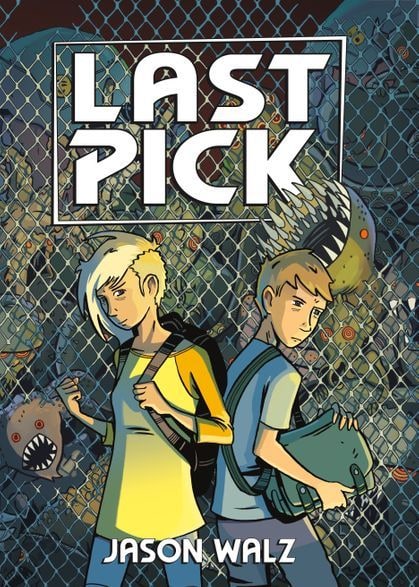 The very first page of this young adult graphic novel exemplifies the artistic and emotional impact of the whole book—the small figure of Sam is leaping from the letters of the word ‘chapter’ to the number 1 over a grotesque alien figure. Everything from the gesture in Sam’s fingers to the drool coming from the alien’s fearsome mouth communicate tension and anxiety. The contrast between the rendering of the human figures and the aliens helps to make clear to the reader that the humans often cast in victim roles are the ones we are to root for and empathize with.

The reader soon learns that twins Sam & Wyatt are among the “strange unwanted trash” left behind in a world filled with aliens. Walz treats each of these characters with empathy—their disabilities or labels are not the defining features of their characters. The reader sees that a limb is missing or reads between the lines to infer a diagnosis, but only after seeing and sensing a rich, human character. Throughout the book, these characters’ identities as ‘outcasts’ and ‘unwanted’ points a finger at the ageism, ableism, and stigma present in our world today; the dominant culture is represented in the biases and discrimination of the aliens. As an art therapist working with older adults, the panel showing the older adult citizens being informed their food rations will be cut because they’re older and seen as useless brought me to tears. Through Sam and Wyatt’s eyes, the reader becomes immersed in a story where those who are usually the ‘last pick’ are the primary foci of the story. Just as Wyatt claims his power as a symbol of hope, Walz urges the reader to take that message out into the world.

I would love to see this book adopted as part of anti-bullying efforts in schools or utilized in teacher education. In a family, the book could stimulate conversations about sibling relationships and the connection between the nuclear family and the greater community. It is also an excellent example of the use of graphic novels and the language of comics as a means to communicate emotion; there are no un-emotive, generic characters in this book; each face has a personality and a feeling of realness. For writers and artists interested in representing a diverse range of characters, this book is an inspiration.

Erin Partridge, PhD, ATR-BC is a board-certified, registered art therapist and researcher based in California. She is interested in the use of images to express our experiences and the use of images as a form of data.