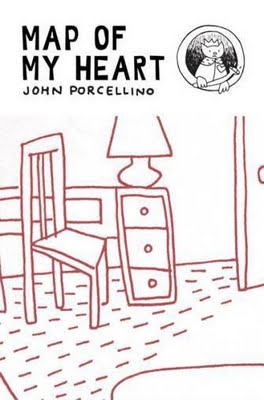 Not reviewed yet by GM.org

MAP OF MY HEART celebrates the twentieth anniversary of John Porcellino’s seminal and influential comics zine, KING CAT COMICS, which he started self publishing in 1989 and which has been his predominant means of expression. In this collection, while Porcellino is living in isolation and experiencing the pain of divorce he crafts a melancholic, tender graphic ballad of heartbreak and reflection. Known for his sad, quiet honesty rendered in his signature deceptively minimalist style, Porcellino has a command of graphic storytelling as sophisticated as the medium’s more visually intricate masters. Few other artists are able to so expertly contemplate the sadness, beauty, and wonder of life in so few lines.

“Since 1989, John prcellino’s simple, and simpy beautiful, comics (along with letters, lists, and a few photographs) have been self published to growing acclaim.” – MINNEAPOLIS CITY PAGES

“Porcellino is a master at miniature poignance.” – ENTERTAINMENT WEEKLY