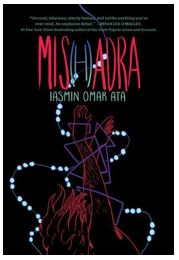 Mis(h)adra, the title of this remarkable graphic novel by Iasmin Omar Ata, breaks apart into “mish adra”, or I cannot in Arabic. Viewed another way, Mis(h)adra can also be “misadra”, a term for seizure. Trigger warning from Mis(h)adra and this review including mentions of self-harm and suicidality with some additional available resources: National Suicide Prevention Lifeline (1-800-273-8255), Crisis Text Line: Text “Home” to 741741.

Isaac, the main character, is a young Arab college student struggling with controlling his epilepsy and growing feelings of disconnection from the people around him, on top of wrangling his classes and his relationships. He started suffering from seizures five years ago and struggles with navigating skeptical and dismissive physicians, ineffective medications, and the loneliness of being ill and different from others his age. A budding friendship with his schoolmate Jo seems to be the one silver lining…and the one thing that keeps pulling him back from the brink of doing something impulsive and irreversible in his frustration with his disease.

Mis(h)adra’s hardcover version sports crisp pages bursting with Ata’s exciting use of colors, on-point dialogue, and visually engaging artistic style. Isaac is instantly recognizable with his stylish mop of hair and band t-shirts…and these mysterious knives with piercing eyes that dog him at seemingly random moments throughout his day. Fading in and out of frame, these creatures appear when Isaac is emotionally or physically stressed, as a recurring metaphor for the auras that portend his seizures.

The story and artistic style instantly bring to mind another graphic novel, the well-known memoir Epileptic by David B., which details the author’s experiences growing up with a brother suffering from epilepsy. While the plots diverge based on the authors’ personal lives, the two novels share several features. Epileptic also involves fantastical scenes and clever use of negative space. Most of all, both books touch upon the isolation wrought by the disease itself beyond its physical symptoms.

One of the most compelling aspects of Ata’s illness narrative is the moments when Isaac acknowledges the shared experience all patients may have. In one early scene, he explains his type of epilepsy to his friend Jo, “[it’s] not that simple…that’s not all there is to it,” as he lists his different seizure triggers beyond simply flashing lights. Isaac also recognizes that he may be using some medications, namely lorazepam, as a magic Band-aid for his seizures. And, in a moment of desperation and frustration, he stops taking his medicine completely, already having lapsed in refilling some of his prescriptions on several occasions. Another ongoing thread in his narrative is his willful refusal and avoidance of speaking with his father, who is in denial himself about his son’s epilepsy. These emotions permeating Mis(h)adra are powerful and palpable, particularly in the creative ways Ata uses the color and layout of the page and almost-mythological character design to capture pivotal changes in Isaac’s decision-making.

If the underlying theme of Mis(h)adra is ultimately the isolation of the patient’s experience, then, rest assured, Isaac finds redemption and connection by the end, as soon as he opens up and allows others to try to understand his condition. The real conflict in this novel is not necessarily the illness itself and the solution not necessarily a magic pill prescription but Isaac’s sense of self and place in the world at large, at a stage in his life when so many aspects in his personal and physical life are changing and uncertain. Mis(h)adra, with its incredible illustration of one young man’s illness, is certainly a worthy book to add to any to-read list.

Adela Wu, MD is a neurosurgery resident physician at Stanford Health Care in Palo Alto, CA broadly interested in the intersections among her clinical practice and the medical humanities.