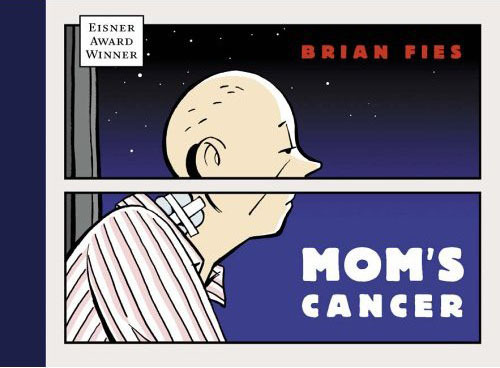 Brian Fies originally chronicled his family’s struggle to come to terms with their mother’s metastatic cancer in an anonymous serialised web comic. He had no idea how the story would end when he started posting it, but he hoped that others similarly affected would find some comfort in knowing they were not alone. Reader numbers increased by word of mouth (or email) recommendation and the strip was picked up and published as a hardback book in 2006. It has subsequently won several awards, including an Eisner. It is a beautifully produced book, with understated graphics, mostly in black and white but  the very occasional and restrained use of colour lends it a dignified, if slightly melancholy quality.

Whereas Cancer Vixen is the story of the experiences of a New York “it girl”, Mom’s Cancer is about an average middle class american family. Many themes are shared however: feelings of bewilderment, fear and dislocation; changing body image; the cost of treatment and poor communication. In one sequence “Mom” is encouraged by medical staff to report any side effects of treatment, and then is made to feel stupid when she does so and then again is berated when she doesn’t. There is an obvious lack of holism in her care: the different manifestations of her metastatic illness are treated by different specialists and Mom feels that different parts of her body belong to different people.  The practicalitles of life in chemotherrapy are covered, with misconceptions, such as chemo making one lose weight, corrected. The subject is treated in a lighthearted manner without making the strip ‘funny’ per se. Cancer treatment is, after all, a serious business.

The book contains a fair amount of clinical information, maybe inteneded to help sufferers understand what they are experiencing.
The awards are well deserved; I would recommend this book to health professionals as a valuable document of the patient and carer experience.