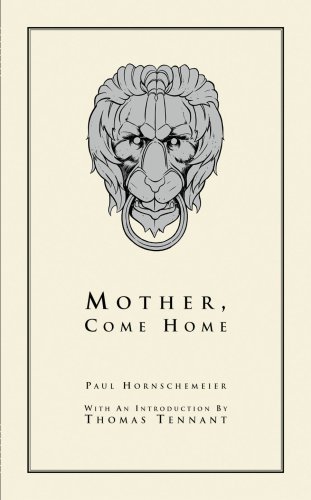 This is a beautiful book. The whole work is understated and subdued, from the cover to the promotional artwork at the end. An atmosphere of Ware-eque melancholy pervades it, the graphics are all somber colours and clear line style.

A father and son struggle to come to terms with the death of the mother, an event that has plunged the father into a deep depression. As only children or oldest siblings are want to do, Thomas, the seven year old son feels great responsibility for much of what goes on, assigning himself a commanding and caring role. He has appointed himself both his fathers protector and as “groundskeeper” of the house, his mothers grave, and the woods between. Well meaning but unwelcome family members intervene as the situation becomes more precarious.

The story opens with an eerie dream sequence in which the father’s avatar is seen floating around a strange world looking for the wife whose death he cannot accept. It goes on to catalogue the fathers despair, his attempts to carry on as normal with Thomas, his descent into self absorption and depression, finally needing admission to a psychiatric hospital, and his subsequent treatment there. Thomas is placed in the care of his aunt and uncle, well meaning people whose intervention he resents. He sees it as his mission to “rescue” his father from the men who came to take him away.

Throughout, the story alternates between reality and fantasy, employing flat illustration for the former and distorted characature with dark tones or simplified childlike drawing with pastel colours for the latter. The motif of a lion mask is used throughout. It was given to the boy, Thomas, by his mother and is used as both a connection to her, a portal for escape into fantasy, and part of his groundskeeper uniform. In the daydream sequences, he is the lion, and the adults in the story morph into animals too.

There is a twist to the tale, which I will not relveal here. I must say that I found everything up to ths twist both beliveable- as a childhood temporally focalized through an adult narrator- and desparately heart rending. I found the ending events, however,  slightly spoilt the story for me, not so much in what actually occurs as the manner in which it takes place and the childs reaction. There again, Thomas is not really a child, he is the adult remembering his childhood, and memory changes. Despite the ending, this is a very good book: engaging, emotive and a visual treat.