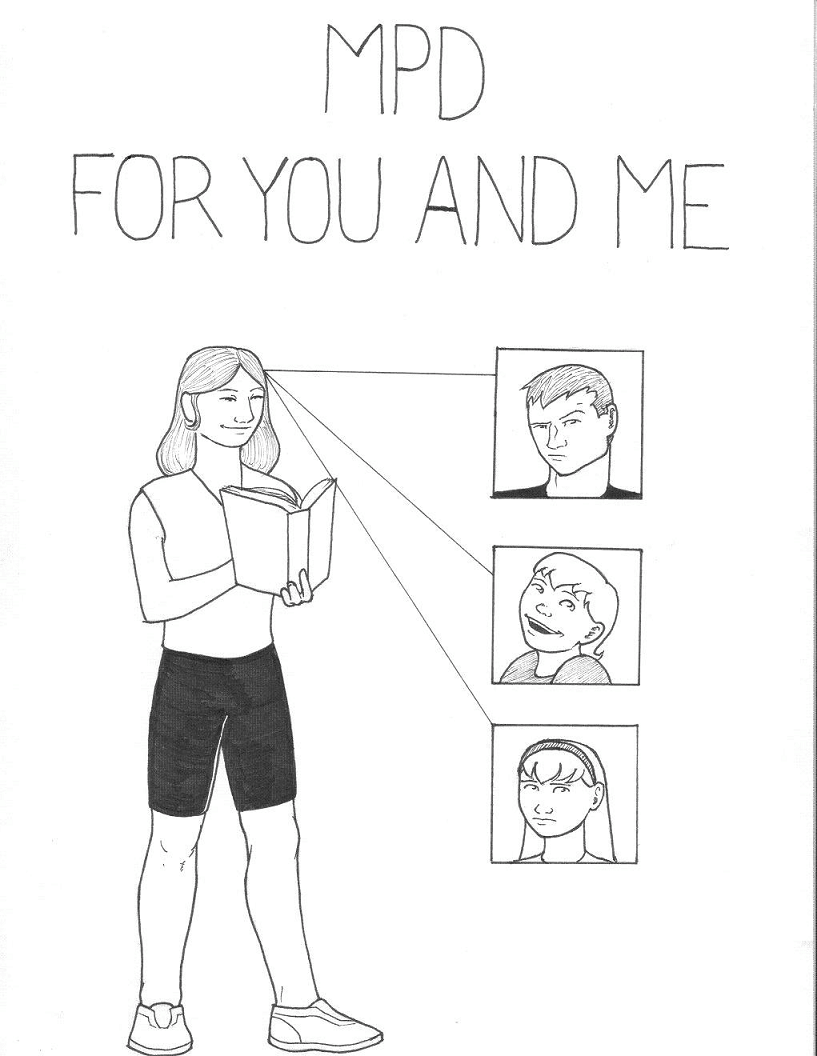 Where to buy: available free online at http://healthymultiplicity.com/loonybrain/Comics/MPD/MPD01.html

“Another thing I want to do is tear away the text of the DSM to show the richer world underneath.”

This is what the author’s alter Rogan tells us on page 2 of MPD for You and Me, a comic available in print or as a free resource online. It is an apt way to describe what the comic begins to do, as well as what’s missing from mainstream understandings and representations of multiplicity, or the experience of multiple consciousnesses existing within one body.

In MPD for You and Me, LB Lee and a few of their alters, making comics under the name LoonyBrain, take the reader through a brief educational tour of life with MPD. Though short in length, this comic manages to introduce readers to some basic terminology, history, and the more commonly understood diagnostic criteria of MPD that was accepted before the early 90’s when the name was changed to DID in the United States. While there is of course debate about the proper terminology, I will continue to refer to it as MPD throughout this review as that is the language used by the author.  Undoubtedly most important is the exploration of the MPD experience, as we see it not just through LB’s perspective, but most prominently through that of their alters.

Across popular media, Multiple Personality Disorder, or Dissociative Identity Disorder, is presented as a dangerous condition. Most narratives involving MPD are a part of the horror, suspense, or thriller genres and use the disorder primarily as a plot device or trope that bolsters fear, and confusion amongst viewers. Characters with MPD are typically represented as behaving with violent impulse and are given very few autonomous or humanizing qualities. Despite representing a system of personalities, the MPD character of popular media is rarely dynamic or complex. It’s no wonder so little people have an accurate understanding of how MPD actually manifests or affects daily living. I’m uncomfortable admitting that I even know plenty of people who consider themselves mental health and illness advocates yet still perpetuate negative stereotypes about MPD. How can there be such a large gap in our understanding? Sybil, the landmark film and preceding novel that brought MPD into mainstream awareness, was released in the early 1970’s. How is it that as a majority, our understandings of the “condition” do not seem to have been enriched in any way since then?

LB and their system tackle these misconceptions by sharing with us the particulars of how their alters express themselves, perceive the world, and interact with their surroundings, as well as each other. Topics addressed include how/why/if people develop MPD, possible treatments and their efficacies, acceptance of multiplicity, and the diversity of multiples within a system. MPD for You and Me succeeds in breaking down complex subjects by presenting them through simple imagery and language, making it a more accessible resource across varying ability statuses or even for those for which English is not a primary language. However, one shortcoming of this format is that there is limited space and language to address the more complicated issues. While plenty of accepted terminology is introduced, there is no mention of what language is considered harmful to the multiplicity community or why some terms are preferred over others. Some aspects are over-simplified to the point of lacking clarity, or even stepping into uncomfortable territory.

Such is the case in this set of panels where Rogan discusses his perception of himself and compares it to the experience of a “transgendered person”—this vocabulary is commonly denounced by the trans community as being dehumanizing and the comparison itself feels off-putting to me, a nonbinary reader. LB and their system risk playing into transphobic misconceptions that equate transness to mental illness, which is a disservice to both the queer and multiplicity communities, as well as an act of erasure towards trans people with MPD.

Despite a few questionable moments, MPD for You and Me is a good introductory text for people with limited knowledge of multiplicity as it manifests in MPD. Those living with MPD or multiplicity as it manifests in other aspects of mental health may find relief in a more realistic portrayal of MPD produced by an actual system of multiples, and not a fetishized objectification of “craziness” produced by neurotypical entertainment writers. LB includes a link to their website, healthymultiplicity.com on the back cover, which may serve as a more thorough resource for those inclined to learn more.